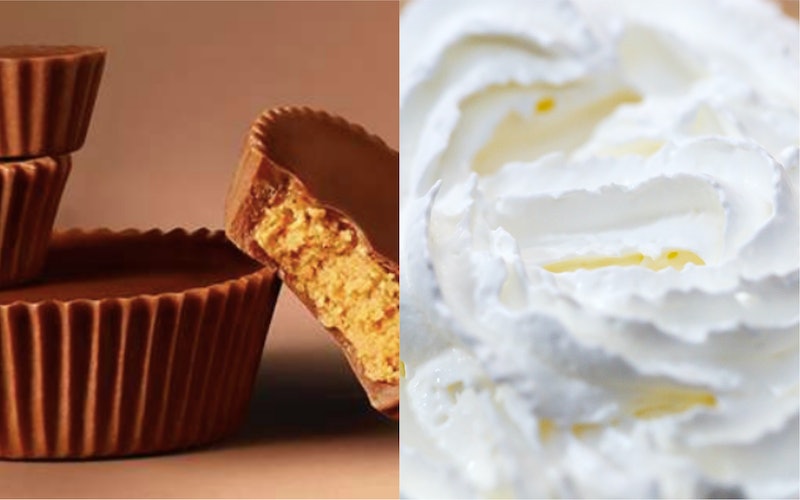 So, uh, not to get you too excited or anything, but Hershey’s and Reese’s whipped cream might be on the way. Yes, the fun kind that comes in a can and makes delightful little starbursts and flower shapes whenever you use it on a scoop of ice cream. Food Instagrammer Markie Devo broke the news on Tuesday with a post on his feed featuring what looks like fairly low-res images of cans of the stuff, and, well… to say that folks are excited is putting it mildly. Bustle reached out to Hershey’s for more information, but received no reply by press time.

Before you get too invested in this news, though, you might want to slow your roll: There is virtually no additional information available about this stuff right now, either from official channels or unofficial ones. All we really know at this point is what Markie Devo posted on Instagram: “I heard the snack internet world needed saving, so I have come to the rescue,” he wrote. “The wonderful world of whipits [sic] is about the be turned upside down!! Hershey’s is release a milk chocolate and Reese’s whipped cream the 3rd week of July and will be available at all major retailers.”

But… that’s it. And that’s assuming that all of that information is accurate or doesn’t change between now and the middle of July, too. Until we have official confirmation, it’s usually best to consider everything to be up in the air and very much subject to change. (Again, Bustle has reached out to Hershey’s and will update if/when we hear back.)

Still, though, folks on the interwebs are already expressing their excitement about the possibility of this treat gracing our ice cream sundaes in the near future. Most kept it short and to the point:

While others were a bit more loquacious:

Pretty much everyone agreed with this reaction, though:

“The third week of July” just isn’t specific enough for the masses. Can we expect to see it on Monday? Or will we be waiting all week for it to drop? Inquiring minds need to know.

Peanut butter is a tougher whipped cream flavor to find pre-made in stores — but it’s actually quite simple to make yourself: According to various recipes like this one from Through Her Looking Glass and this one from Noble Pig, all you really need to do is combine some whipping cream, confectioner’s sugar, vanilla extract, and either creamy peanut butter or peanut butter powder in a bowl and go to town with a hand or stand mixer. Are you non-dairy or vegan? Then use coconut cream — the white layer in a can of coconut milk — instead, as Cake Merchant’s recipe suggests. Heck, you could probably even make chocolate-peanut butter flavored whipped cream by adding in some cocoa powder or chocolate syrup, too — then you’d really have a Reese’s-flavored treat on your hands.

Of course, though, what the canned stuff has over the homemade stuff (besides the fun factor inherent in a spray can of whipped cream) is instant gratification — so here’s hoping that the rumors turn out to be true. Sometime, you just can’t wait for an ice cream sundae.