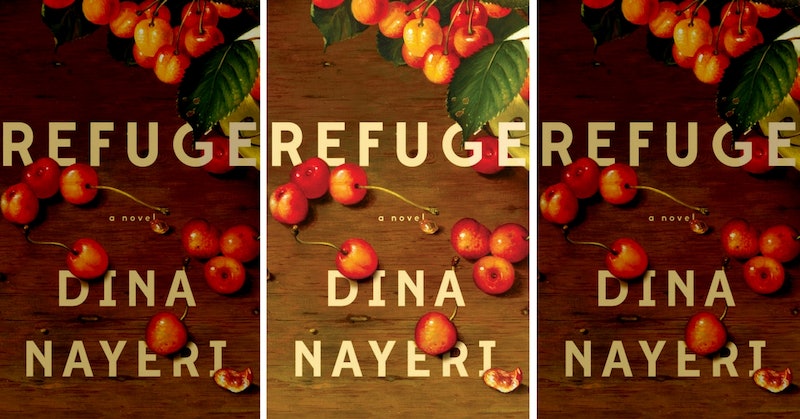 From exciting new thrillers by bestselling authors to emotional memoirs by feminist icons, the summer of 2017 has been ripe with incredible books worthy of your TBR pile. But considering what else 2017 has brought us — the inauguration of Donald Trump, two separate travel bans, and a refugee crisis that continues to claim the lives of hopeless men, women, and children every day, Dina Nayeri's novel Refuge should be required summer reading in 2017.

In her second novel, Nayeri draws from her personal experience as an Iranian refugee to craft a beautiful and poignant portrait of the many different experiences of the displaced. A timely and necessary work, Refuge asks readers to challenge their definitions of home and belonging.

Niloo is only eight years old when her mother fled Iran with her and her brother in tow for a better life in the United States. Now a successful academic living in Amsterdam and married to a Frenchman, Niloo has done all she can to shed her past as an Iranian — specifically cutting ties with her father, Bahman, who stayed behind to tend to his dental practice and his opium addiction. Since leaving Iran 20 years ago, Niloo has only seen Bahman four times, and each visit gets more painful for the woman who is trying everything to fit in to her new European lifestyle and forget about her provincial father, his embarrassing village lifestyle, and his abandonment of the family.

But when Niloo begins spending time with a group of Iranian refugees in Amsterdam, she reconnect with the culture she left behind as a child. Listening to the poetry of her past, tasting the food of her home country, talking in her native language with other displaced individuals, many of whom are struggling to put down roots, legal and emotional, Niloo begins to feel even more disconnected from the life she has tried to create with her husband. What's more, the political situation in Iran is growing more dire. And Niloo's father's own troubles — his addiction, his failed marriages, and a potential imprisonment — escalate. As her carefully crafted life begins to crack, Niloo must decide whether or not she can accept her father's struggles and help him the same way she wants to help the refugees she's befriended.

Written in lush and poetic prose, Refuge is a heartrending story of displacement, identity, and finding a place where you truly belong. Thought-provoking as it is emotionally moving, Nayeri's novel balances several stories in one: the politics of Iran, the intricacies of family, and the emotions of trying to replant roots that were ripped up.

Through the experience of Niloo and her family, the refugees she meets in Amsterdam, and later, her father, readers are exposed to the very real, very emotional, very intense hardships of trying to find that most precious thing: refuge. While some of the characters were fairly two-dimensional — Niloo's mother is often talked about, but her interactions in the book are shallow, and Niloo's husband is more of a caricature-turned-plot device — the others are richly imagined and deeply empathetic.

For the over 65 displaced people worldwide, this will be a familiar story they've lived through, but for the rest of the world, it's a stunning exploration of the unimaginable challenges of fleeing home, searching for safety, and trying to assimilate in a place that never really feels like the safe harbor it was meant to be.

An essential addition to the growing library of refugee literature, Refuge is a vital read for anyone trying to understand what it means to lose and look for home.