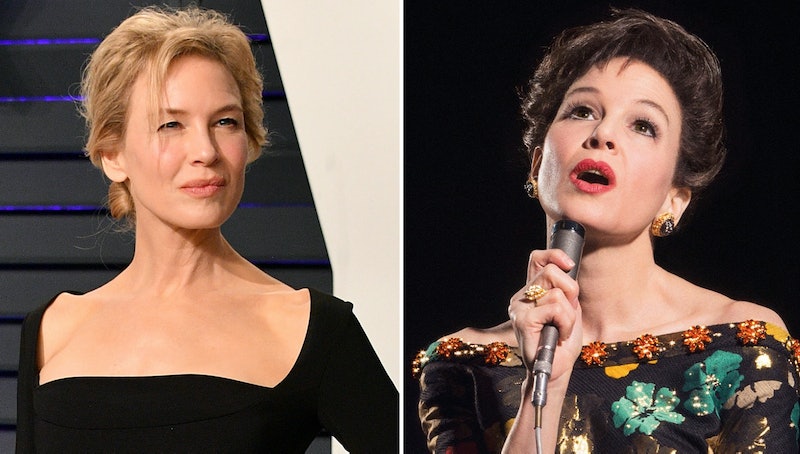 It's easy to look back on old Hollywood glamour with a whole bunch of gooey nostalgia. You watch the movies, you ogle the beautiful dresses, you dream of being whisked around LA is a gorgeous in an old school cadillac. Oh the glitz! But, y'all, while it might have looked good, history tells a decidedly different story. A prime example of this is Judy Garland, whose well-documented struggles led to a difficult and short life. And Renee Zellweger says that playing Judy Garland often left her feeling very emotional.

Zellweger is playing Garland in the biopic of her life, Judy, and she spoke to the Daily Mail's Baz Bamigboye about her experience playing such a complicated woman. Zellweger explained that immersing herself into the character meant that Garland was in her ears, in her eyes, all around her, saying:

"I'd listen to her music every day. I'd watch footage of her before I went to bed. She was always there, always present. I had to get myself into Judy's environment: her voice, her speech patterns, the moments of vulnerability in her life that make you cry."

The film predominantly focuses on Garland's later life and her stint on the West End, which was plagued with problems from the get-go. However it also looks back on the troubled star's past and what led up to her experiencing addiction and mental health issues.

Garland's well-documented addiction to prescription pills began as a child when, as the Irish Independent reports, she and her siblings were given "pick-me-ups and sleeping pills to help them manage the stresses of professional life."

Speaking to the Daily Mail about Garland's youth, Zellweger said it was very difficult to even imagine. And this was the starlet's real life. She said:

"The cruel manipulation when she was a kid. The unkind way they got around the child labour laws. They fed her pills! She was addicted her whole professional life. I can't imagine that she slept, ever. Imagine how all those pills can affect a woman's chemistry."

Being a bit of a Hollywood icon and playing a legendary star must have been a huge undertaking for Zellweger, who's best known as playing the much-loved Bridget Jones. Especially as, although (thankfully) a lot of things are beginning to improve in Hollywood, some things sadly remain the same. Zellweger has faced vitriol from the press and constant intrusions into her personal life. So much so that,in an interview with British Vogue in 2016, she revealed that she chose to quit Hollywood for six years to keep take some space from it all.

Speaking to the Daily Mail, Zellweger said that there are undoubtedly a few things in Garland's experience that she feels a great connection to:

"There are certain things about her experiences that I might understand. The misconceptions about being a public persona. I've had my share of misrepresentation with the press. It comes with the deal, doesn't it?"

Judy will be out in UK cinemas from Oct 2

More like this
Jennifer Coolidge Got A Lot Of “Action” Thanks To 'American Pie'
By Catharina Cheung
At 28, Lesley Manville Was Acting, Picketing, & Singing Kate Bush Songs
By Olivia-Anne Cleary
'Scream’s Courteney Cox Has Broken A Major Horror Record
By Sophie McEvoy
Selena Gomez Has Been Spotted Having Fun With A Top Film Producer
By El Hunt
Get The Very Best Of Bustle/UK