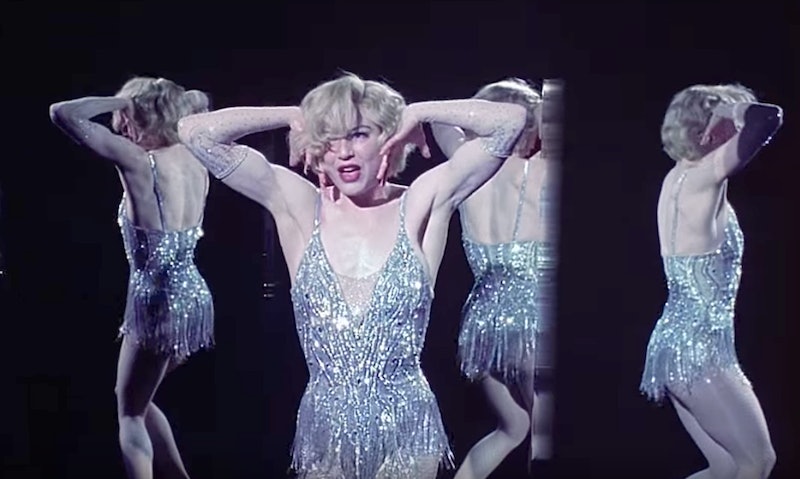 Jazz music is timeless, which is one of the many reasons the movie Chicago is so iconic. Referred to as a "screen triumph" by The Hollywood Reporter when it made its debut, the film adaptation of the Broadway musical was an instant hit. The dark, edgy, and sexy film about Chicago's hottest Jazz Age performers, who slickly work their way out of prison, still holds up today. While promoting her latest film Same Kind Of Different As Me, Renée Zellweger reflects on Chicago in honor of the film's 15th anniversary this December. Looking back at the glorious experience, Zellweger claims that at the time, she had no idea just how successful the Oscar-winning movie would be.

Chicago was a critically-acclaimed triumph at the onset of its release. It won the Oscar and Golden Globe for Best Picture in 2003 and racked in six Academy Award wins overall. Zellweger won the Golden Globe for Best Actress for her portrayal of the innocent-turned-corrupt performer Roxie Hart.

"I never thought about it[’s success]. Ever," the actor says. In fact, she still recognizes how truly challenging the role was for her. "It was such an insular experience of growth and trying," she explains. Zellweger even refers to the shooting process as "terrifying." For one, there was a lot to live up to. Chicago first hit broadway in 1975 New York City.

But each task, number, song, and dance, was a hurdle in itself when bringing the larger-than-life show to the big screen. "I didn’t think outside of what we were trying to achieve in a day and hoping we could pull it off... things you’d never imagined would [work]," Zellweger remembers. "And when we did, it was like hitting the landing in the Olympics."

Industry vets may have starred in the movie, but the work was still daunting and seemingly "impossible" to them. The cast, including Catherine Zeta-Jones (Velma), Richard Gere (Billy Flynn), and Queen Latifah (Mama Morton) did all of their own singing and dancing. Back when the movie came out, Zeta-Jones also admitted how intimidating that was.

And Zellweger perhaps wasn't even fully aware that she'd be singing her own songs when she first took the gig. Executive producer Neil Meron admitted the crew didn't know Zellweger could sing at first until she eventually gave it a try. "It was fantastically liberating, I can't even tell you," Zellweger said in the old interview. But showcasing her hidden talent wasn't even the highlight of Zellweger's experience. In fact, she says it was watching one of her co-stars in action.

Looking back, Zellweger says there are a "million moments" that she holds dear, but the single greatest was experiencing Zeta-Jones perform in person. "Sitting there in the room and watching Catherine do ‘I Can’t Do It Alone,'" she recalls. "[It was] the magic of it, the literal magic of it."

Zellweger still admires Zeta-Jones now as much as she did then. In her 2003 Golden Globe acceptance speech, Zellweger told her co-star she'd made her experience so memorable. "I'll never forget it. The laughter, and listening to you everyday, and being around you being in your bliss like that. It was such a joy," she said.

In the spirit of the big anniversary, Zellweger wonders what it would be like if she, Zeta-Jones, and the cast reunited to perform from the show again. "How fun is that? What a fun thing to imagine, if we did it again," she says. (They haven't been together since reuniting to present at the 2013 Oscars in honor of the 10th anniversary.) "With what I know about the last experience, I’d probably savor every second of that," the actor says. "What a treat."

Even back then, the cast noted how the experience set itself apart from other films. Zellweger once referred to Chicago as "camp" and Gere said it was the most fun because "everyone was in this kid mentality." And that comradery Zellweger remembers so fondly was apparent on screen. Their chemistry and one-of-a-kind performances earned incredible recognition, awards, and all that jazz.