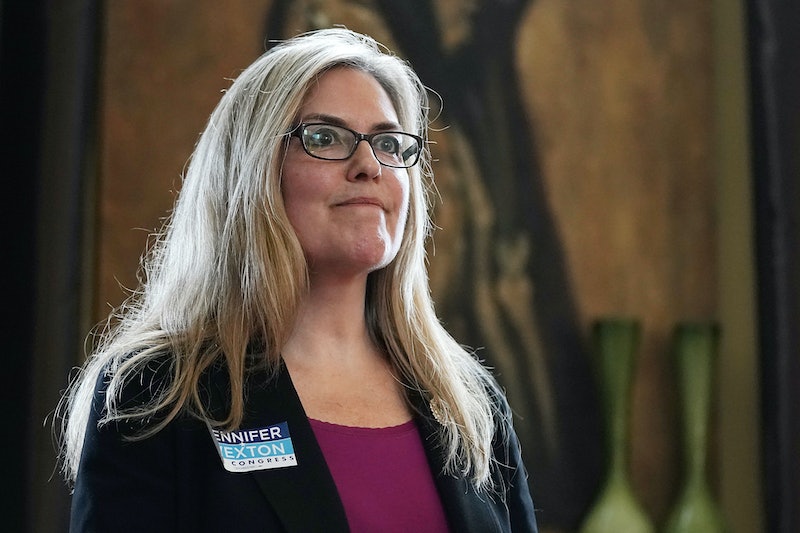 Along with bringing Congress a fresh look— Congress has never been more diverse — this year's freshman congressional class is bringing a different kind of red, white, and blue to the halls of the Capitol. On her first day in office, Virginia Rep. Jennifer Wexton placed a transgender flag outside her office in Washington, D.C.

"The trans community has been under attack," Wexton told The Washingtonian about her motivation to display the transgender pride flag outside her office in the Capitol. "I wanted to show my solidarity because we are talking about my friends and family." According to the paper, Wexton is an aunt to a transgender child. Bustle has reached out to the Virginia congresswoman's office for additional comment.

The flag was spotted outside Wexton's office at the Capitol on Thursday by Human Rights Campaign Regional Field Organizer Narissa Rahaman. "The trans flag is proudly & openly displayed next to the Virginia flag outside @RepWexton's new office," Rahaman tweeted alongside a photograph of the flag on display. "She said to me, 'Did you see the flag?! I think we're the only office on the Hill with one.'"

Rahaman went on to thank the congresswoman for her efforts toward inclusion. "Seeing this flag — the only trans flag on the Hill — outside her office left me speechless and with tears in my eyes!" she wrote in a separate tweet. "Thank you for standing up for the LGBTQ community, Congresswoman!"

It was unclear as of Friday, how long Wexton planned to display the flag outside her office at the Capitol.

But Wexton reportedly isn't the first or only legislator to display the transgender pride flag outside their office. In 2016, former California Rep. Mike Honda placed one outside at least two of his offices. The former California representative had long been vocal about his support of his transgender grandchild.

"We face new challenges across our country, as right-wing groups try to scapegoat transgender people to pass mean spirited anti-LGBT legislation," he wrote in a Facebook post announcing he was "proud to display the transgender flag" outside his D.C. office. "No one should be denied equal treatment under the law for being who they are."

Still, according to the Human Rights Campaign, which endorsed Wexton in June, the congresswoman "worked tirelessly to advance fairness and equality for all" while serving in the Virginia General Assembly. In a statement announcing their endorsement, the civil rights organization said Wexton was "a proven leader who will stand up in the U.S. Congress for Virginia's working families and help pull the emergency brakes on the Trump-Pence administration's reckless agenda."

In recent years, Virginia has been a state were transgender individuals have broken barriers. In 2017, for instance, Danica Roem became the first openly transgender woman to be elected to a state legislature when she defeated incumbent Republican Bob Marshall to nab a seat in the Virginia General Assembly.

On Thursday, Roem responded to reports that Wexton was displaying a transgender flag outside her office at the Capitol with a simple, but heartfelt, thank you. "Thank you, Rep. @JenniferWexton," she tweeted. "I'm proud to call you my congresswoman."