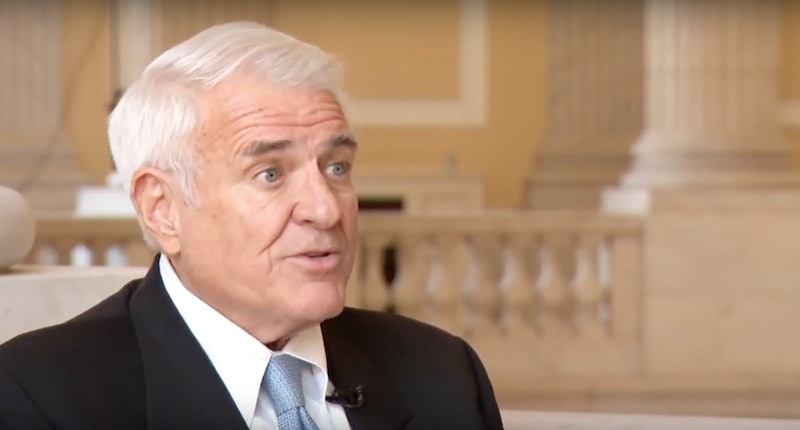 During a congressional hearing about immigration, Rep. John Carter suggested that "attractive children" who immigrate to the U.S. are more likely to be targeted by human traffickers, CNN reports. Carter made the comment during a conversation about asylum laws intended to protect undocumented immigrants who are detained in the U.S..

"Believe me, a lot of the attractive children are not making it to the border," Carter said. According to video of the exchange, there was an extended pause in the conversation before lawmakers moved on to other subjects.

In a statement, Carter's spokesperson later clarified what the Texas representative meant:

The congressman was referring to the fact that it's a sad reality that unaccompanied children are subject to kidnapping, sexual violence, physical abuse, human trafficking and even death at the hands of human smugglers and ruthless cartels during their journey to cross over the southern border. There is currently a loophole in the law that makes it useful for children to cross over the border alone so they can remain in the United States, and without the protection of their parents or other family members during their journey they are at even more of a risk to be exploited by the coyotes and cartel.

In this context, "coyotes" refers not to the species of canine, but rather to professionals who specialize in smuggling people across borders.

Carter serves as chair of the House Appropriations Subcommittee on Homeland Security, which provides funding for Immigration and Customs Enforcement (ICE). Broadly speaking, he's an immigration hawk: Carter voted to fund President Trump's proposed border wall between the U.S. and Mexico, supports the deployment of unmanned drones to patrol the U.S.-Mexico border, and only supports temporary worker programs if the workers in question are forced to return to Mexico when they finish their jobs in America.

"I believe we must implement an accountable and effective temporary worker program to allow employers to hire workers to meet demand and grow our economy, Carter writes on his website. "This will allow workers to come to the United States to perform jobs that Americans do not want, and then return to their home countries when the job is complete."

Although Carter supports Trump's hardline anti-immigrant policies, many have warned that those policies have the potential to make human smuggling an even worse problem than it is. Trump's own chief of staff, Gen. John Kelly, said in a 2017 congressional testimony that human smuggling has become a more profitable business since Trump was elected, with coyotes on the U.S.-Mexico border raising their prices by roughly 130 percent since November 2016.

In July 2017, authorities discovered a tractor trailer in Texas with 30-40 Mexican immigrants who'd recently crossed the border — 10 of whom had died on the way over. Alex Nowrasteh, an immigration policy analyst at the conservative Cato Institute, said that Trump's immigration policies will likely make deadly incidents like that more common.

“People use these risky means of entering the country when safer means are unavailable to them,” Nowrasteh told Mic. “The more border enforcement there is, the more people there are who are going to take risks like this — and it will result in more people dying...I would expect it to continue and possibly increase during the Trump administration.”

In April, Trump ordered the National Guard to patrol the U.S.-Mexican border, and so far, Republican governors of border states have authorized 1,600 National Guard troops to guard the border. He's also requested $18 billion from Congress to begin construction on a border wall. That price would only cover roughly half the price of securing the entire 2,000-mile border, according to the administration's own estimates. However, Congress hasn't allocated any of that money yet, so construction of a new border wall has yet to begin.