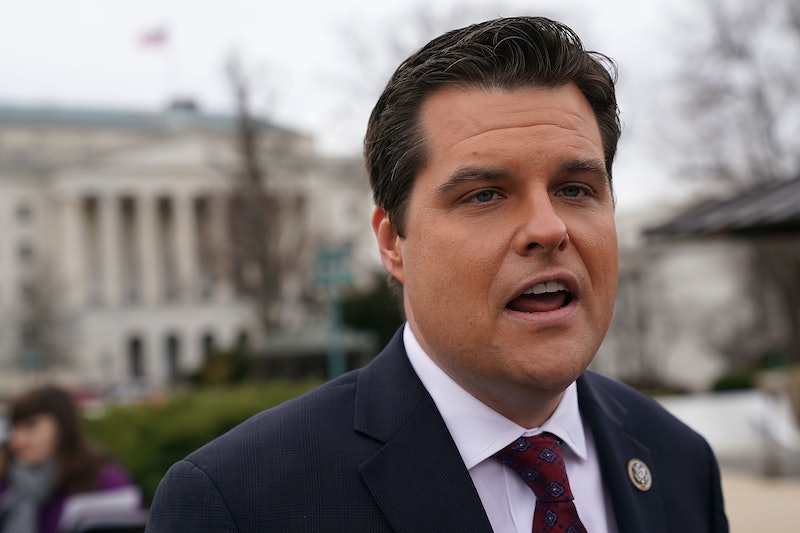 A right-wing congressman found himself on the receiving end of a flying soft drink this weekend. Republican Rep. Matt Gaetz was leaving a town hall event Saturday in Pensacola, Florida when he was struck by a beverage; a woman who'd run against him in the 2016 primaries was arrested and charged with battery for the incident, according to The Washington Post. While many were quick to assume the congressman was the latest victim of a "milkshaking" trend heating up across the pond, the drink thrown at Gaetz is but the latest entry in a centuries-old protest tradition.

The trend of "milkshaking," or the act of tossing a frothy, cold dairy-based drink on a politician or political commentator, began in April when the Guardian reported that English Defence League co-founder Tommy Robinson was doused in not one, but two shakes over the course of two days. Since then, Brexit Party leader Nigel Farage and various right-wing European Parliament candidates have also fallen victim to "milkshaking." In fact, concern over "milkshaking" grew so bad that local police asked a McDonald's in Edinburgh to temporarily stop selling the beverage while Farage was in town, the Edinburgh News reported.

"Milkshaking's" recent popularity is why many were quick to assume Gaetz had been hit with a creamy beverage. But according to the Post, authorities have said Gaetz was actually hit with a red liquid. "A Hawaiian Punch or something like that," a spokesperson for the Pensacola Police Department said. "It was not a milkshake."

"Milkshaking" aside, Gaetz is by no means the first politician to have ever been targeted by protesters armed with a food or beverage item. In fact, Bon Appétit traced so-called food protests to 63 A.D., when Roman Emperor Vespasian — then serving as a governor in Africa — was pelted with turnips thrown by disgruntled protesters.

Former Alaska governor and one-time Republican vice presidential nominee Sarah Palin had two tomatoes thrown at her while signing copies of her book at the Mall of America in Minnesota in 2009, according to Politico. The year before that, NBC News affiliate WPTZ reported that a protester in a Santa suit had hit then-Vermont Gov. Jim Douglas in the face with a pie during a Fourth of July Parade.

In 2005, the Seattle Times reported that conservative commentator and former presidential candidate Pat Buchanan had been drenched in salad dressing during an appearance at Western Michigan University by a protester who demanded he "Stop the bigotry!" A few days before Buchanan's dressing incident, fellow conservative commentator Bill Kristol was also pegged with a pie while speaking at Earlham College. According to the New York Times, Kristol seemed undisturbed, briefly pausing to wipe pie from his face before continuing his speech.

While campaigning for governor of California in 2003, Arnold Schwarzenegger was pelted with at least one egg while in Long Beach, according to Fox News. The former body builder seemed not to notice he'd been hit until his body guard began brushing the runny egg yolk off him.

That same year, Green Party presidential candidate Ralph Nader was hit with a pie while in San Francisco, The Los Angeles Times reported. But while Schwarzenegger barely blinked at being egged, Nader attempted to throw the pie back at the protester, hoping to serve him his just desserts.

While those on the receiving end aren't generally too happy about it, there's a reason throwing food or drinks has endured the test of time as a protest tool. In a recent column for Current Affairs, G.D. Forrest argued that throwing food on politicians is "a wholesome alternative to harmful physical violence" with "minimal collateral damage to innocent bystanders." Forrest wrote that while protesters who toss food or drinks may find themselves facing some legal consequence, it's likely to be minor.

"It creates media coverage and, if captured on video, can bring mockery down on the receiver," he argued. "And most importantly of all, it sends a message: you are ridiculous, and I will treat you with ridicule."