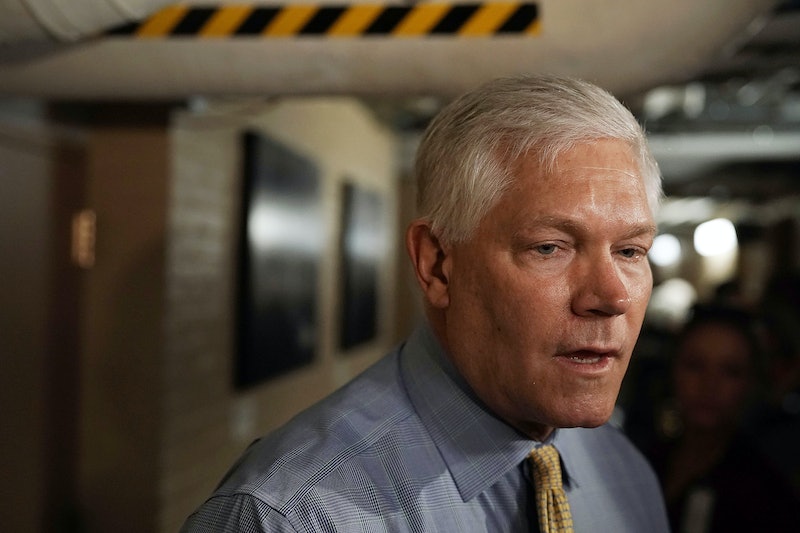 Sometimes a slip of the tongue can carry serious consequences. Such was the case recently when a GOP Rep. said a Texas man killed his wife because she was "unfair," and then later acknowledged that his wording was an accident.

"It was simply a misspeak that obviously does not look great," Rep. Pete Sessions's chief of staff, Caroline Boothe, told The Hill. "However, it does not reflect his actions and his history on this important matter." Bustle has reached out to Sessions's office for further comment.

The clarification stems from a video originally posted by Talking Points Memo (TPM). In the video, and according to TPM, Sessions is responding to a conversation with a conservative activist who wanted to see an end to "no fault" divorce, i.e. allowing divorce without proving that one spouse had done anything "wrong." In order to underscore his belief that family courts in Texas had failed, Sessions evoked stories of partner violence, including murder.

“Dallas County, a few years ago, went through a number of terrible shootings," Sessions says in the video. He continued:

And I gathered together, they were at the time Republican district judges, and I said "guys, men, women, we’ve now had I think four or five shootings." One of them was from a big-time guy in Highland Park, who went and killed his wife, just gunned her down. And that was because the judge was unfair, and the woman was unfair. And she demanded something, and he was out. And it was frustration. So now we go through the court system. And unfortunately lives have to be lost and there has to be tragedy — there now is a better system.

According to TPM, the comments were made at a local political event earlier this summer. Sessions, notably, is the chairman of the House Rules Committee, and is facing a battle for reelection this November.

"Pete was discussing a terrible situation where an individual felt he had been railroaded by a court and then committed a horrific act of violence," Boothe, his chief of staff, told The Hill. "By no means does Pete condone any act such as this. In fact, Pete met with judges and court officials to encourage them to address the frailties in the system and to do more to prevent this kind of tragic family violence from occurring."

It is not clear what case Sessions was specifically referring to in his remarks. Partner violence is a pervasive problem, not just in Texas, but around the United States, and the world. The Centers for Disease (CDC) control report that over 10 million women in the United States are victims of partner violence, each year. Last summer, the CDC further reported that nearly half of all murdered women are killed by their partners.

These deaths are the result of many contributing factors, including toxic masculinity, a culture of violence toward women, and a lack of tangible and cultural resources to enable women to leave potentially, or demonstrably, dangerous situations and relationships. Sessions may have misspoken, but his comments perhaps served to misdirect the reasons behind a continuing, deadly problem in the United States.