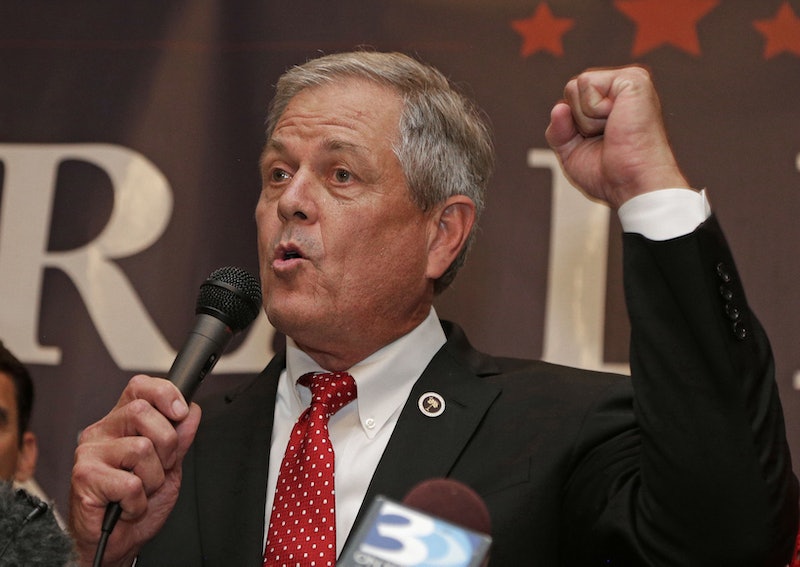 A Republican U.S. representative from South Carolina pulled a gun out while speaking to constituents last week, drawing outcry from those he was meeting with, many of them gun control advocates. The New York Times reported that Rep. Ralph Norman pulled out a gun upon seeing a group from Moms Demand Action for Gun Sense in America who were wearing red t-shirts. Norman has not apologized, but instead doubled down on his right to have a gun and take it out — something others in attendance question.

According to Norman's own Facebook statement on the matter, after entering into a discussion about the country's gun laws, the representative took out his firearm. "I safely placed my gun on the table, pointed away from people, and made the point: 'Guns don't shoot people. People use guns to shoot people. I am tired of blame being placed on the police, NRA, and guns themselves,'" Norman wrote Sunday.

He also drew a former colleague, Rep. Gabby Giffords, into the debate. According to The Post & Courier, Norman connected his right to carry a gun with the Arizona shooting in 2011 when the former representative was shot and six others were killed. "I'm not going to be a Gabby Giffords," Norman told the paper, drawing rebuke even from Republicans like Jeff Flake.

Pictures from the event, show just how close he was to constituents — across a normal restaurant table. The event was called, "Coffee with Constituents," and Norman claimed he would have been prepared for whatever happened. "If someone had walked into that diner and began to fire a weapon, I told them I would be able to defend myself and them as well," Norman told CNN.

Norman noted in his statement that he has a concealed weapons permit (CWP). "My CWP license was just renewed," Norman wrote. "It expires in September of 2022. The restaurant does not ban concealed weapons and I believe no laws were broken."

But that's not a universally held view. South Carolina’s Democratic Party chairman Trav Robertson has asked the government to investigate and consider revoking Norman's concealed weapons permit. He told The Post & Courier that the State Law Enforcement Division needs to look to a statute that declares it illegal to "present or point at another person a loaded or unloaded firearm."

Regardless of the legality, some of the constituents told reporters that they felt uncomfortable by the gun's presence. Lori Freemon, a volunteer with the South Carolina chapter of the gun control group, told The Post & Courier that she didn't feel comfortable with Norman's pulling of the gun during the conversation.

"I had looked forward to a respectful dialogue with my representative about common-sense gun violence prevention policies," Freemon told The Post & Courier. "Instead, I felt unsafe when he insisted on showing us his loaded gun and keeping it out on the table for much of our conversation,” she told the paper.

Norman's comments about Giffords, which were made after the fact to the local paper, led to Flake speaking out. Sen. Flake turned to Twitter to comment. "I sincerely hope you never have to experience what my friend @gabbygiffords experienced. But to suggest that she might have avoided being shot had she carried a weapon as she spoke to constituents that morning is inappropriate and inconsiderate," Flake wrote on Twitter with a link to a story on Norman's constituent meeting.

Giffords' husband, retired NASA astronaut Mark Kelly, told USA Today in a statement. "Americans are increasingly faced with a stark choice: leaders like Gabby, who work hard together to find solutions to problems, or extremists like the NRA and Congressman Norman, who rely on intimidation tactics and perpetuating fear," Kelly said in his statement.

Norman did not address his comments about Giffords in the statement uploaded to Facebook, but he did tell The Post & Courier that he plans to bring his gun to future constituent meetings.