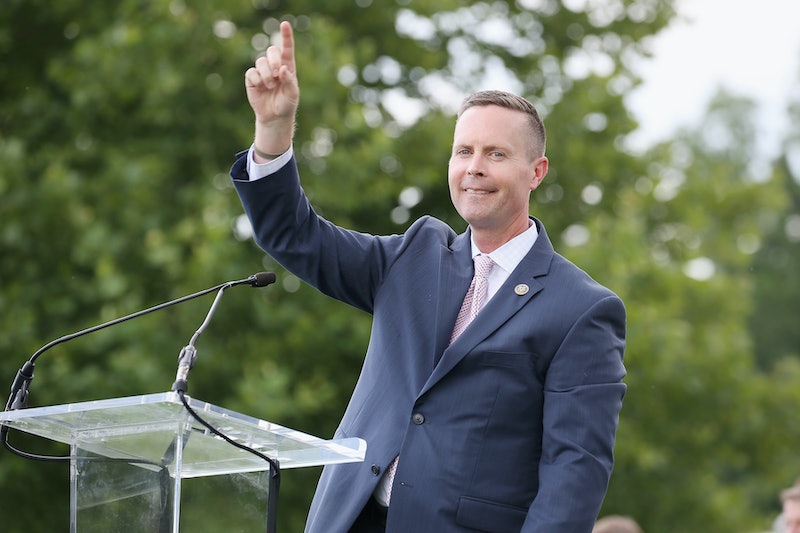 Optics always matter for politicians, but that's particularly true when the country is in the middle of a crisis. Hundreds of thousands of Americans are struggling to get by without pay while the government is partially closed. With that struggle as a backdrop, one airline passenger was unhappy to see Illinois' Rep. Rodney Davis flying first class during the shutdown.

"Congressman, do you think it's appropriate to fly first class while 57 TSA agents aren't being paid?" the flyer asks the GOP congressman in a video obtained by HuffPost. The passenger was seemingly referring to the fact that 57,000 TSA agents are not getting paychecks during the shutdown, but are still expected to show up for work. After Davis declined to respond, the passenger said, "Taking that as a yes," and then continued: "Taxpayers paid for this flight?... Fair enough."

Politico reports that Davis was traveling from Chicago to Washington D.C.'s Ronald Reagan Washington National Airport. Congressional members' flights between the capital and home are typically subsidized by taxpayers, according to HuffPost, because it's considered part of their job to travel back and forth. But Davis' spokesperson told HuffPost that he hadn't used public money to purchase a first class ticket. He was upgraded automatically through his frequent flyer account, she said, adding that "there was no additional cost to taxpayers."

Davis has said many times that he supports ending the government shutdown, though he hopes it results in a deal that includes more funding for border security. Speaking with Chicago station WICS on Jan. 7, he suggested that a border wall was "part of the solution."

"We have to have a border structure to go with the border structure that's already there," Davis said. "It's certainly frustrating to me that we're in a government shutdown. This isn't my first one, and I know the way to solve that problem is to sit down, talk about solutions, and come up with a principle compromise." He argued that Democrats are partially to blame for the shutdown's continuation because they're refusing to negotiate with President Donald Trump until the government is back open. Trump says he'll keep it closed until he gets wall funding.

On Tuesday, Davis tweeted about his support for a deal that Trump offered Democrats to reopen the government. The measure would allocate funding for a border wall and delay deportations for DACA recipients for three years. Importantly, it would not provide these young people, often called "Dreamers," a permanent path to citizenship. Many Democrats are also arguing that a three-year deportation delay isn't a real concession from Trump, since a court order is already prohibiting Dreamers' deportation for the time being.

Davis told WICS that he agreed with the president's assertion that "there are a lot of people who are part of this shutdown who agree with the need for more border security." Despite this, he sided with Democrats to support a Jan. 10 bill that would have reopened parts of the government before a deal on border security had been reached.