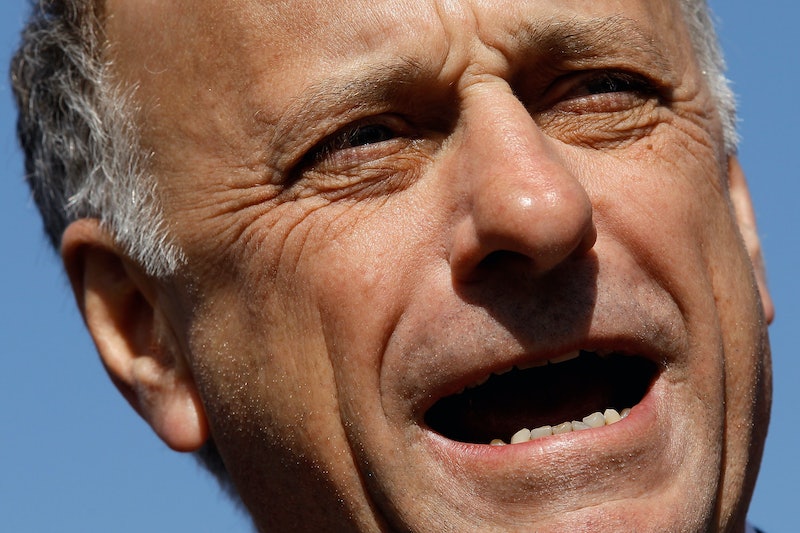 Rep. Steve King left more than a few people outraged on Sunday when he posted a tweet in support of a far-right Dutch politician that seemed to exude the ideology of white nationalists. "We can't restore our civilization with somebody else's babies," King tweeted, which many have said crossed the line. And yet, as controversial and inflammatory as King's comment is, it's not altogether surprising he made such a statement publicly when you consider some of the Iowa congressman's previous comments.

In his tweet, King applauded Dutch politician and prime minister candidate Geert Wilders' understanding that "culture and demographics are our destiny." It was unclear if King meant they were the destiny of Europe and America or simply white Western civilization (or if he even differentiated between the two). King then went on to say, "We can't restore our civilization with somebody else's babies," a comment that seemed to imply the unnamed Other posed a threat to the culture and demographics of Western civilization.

While the Iowa congressman's tweet certainly raised eyebrows, it wasn't the first time King had dropped a contentious or seemingly racially-charged comment into discussions on immigration, race, or demographics. While appearing on MSNBC during the Republican National Convention last July, King attempted to rebuke claims the GOP had become a party of "unhappy, dissatisfied white people" by arguing whites had contributed more to civilization than "any other subgroup."

"This 'old, white people' business does get a little tired," King said in 2016. "I'd ask you to go back through history and figure out, where are these contributions that have been made by these other categories of people that you're talking about – where did any other subgroup of people contribute more to civilization?"

"Than Western civilization itself," King said. "It's rooted in Western Europe, Eastern Europe and the United States of America and every place where the footprint of Christianity settled the world."

Roughly a month before that, King filed an amendment to block the Treasury Department from putting abolitionist icon Harriet Tubman on the $20 bill, saying it would be "racist" and "sexist" to do so.

In 2014, King said then-President Barack Obama had encouraged families in Central and South America to "give their daughters birth control and send them down a rape path through Mexico" and into the United States.

In 2013, the Iowa congressman said the majority of DREAMers were drug smugglers while arguing against the DREAM Act. "For everyone who's a valedictorian, there's another 100 out there that – they weigh 130 pounds and they've got calves the size of cantaloupes because they're hauling 75 pounds of marijuana across the desert," King said.

And in 2012, King said he hadn't heard of anyone getting pregnant as a result of statutory rape or incest in defense of former Missouri congressman Todd Akin's claim "the female body has ways to try to shut down" a pregnancy "if it's a legitimate rape."

While King's tweet about "somebody else's babies" earned him a hefty amount of criticism Sunday he did have some support, namely that of former Ku Klux Klan leader David Duke. "Just in case you were thinking about moving -> sanity reigns supreme in Iowa's 4th congressional district," Duke wrote in a retweet of King's tweet. "GOD BLESS STEVE KING!!!" the former imperial wizard added in a separate tweet.