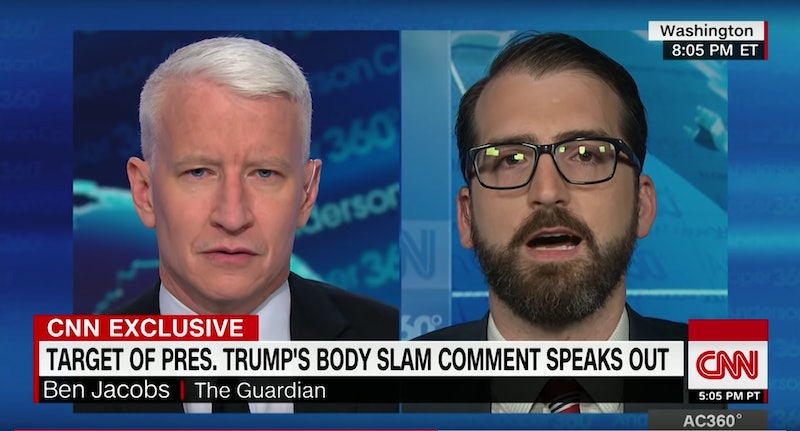 The Guardian reporter who was physically assaulted by Rep. Greg Gianforte last year has pushed back on President Donald Trump's claim the congressman is a "tough cookie." In an interview with CNN's Anderson Cooper, Ben Jacobs slammed Trump for repeatedly praising Gianforte, who pled guilty to an assault charge related to the incident last June and was sentenced to a deferred sentence of 180 days as well as a $300 fine, 40 hours of community service, and 20 hours of anger management.

"A tough cookie doesn't attack someone out of nowhere without provocation, for asking a question about health care policy," Jacobs said on CNN's Anderson Cooper 360° in his first interview regarding Trump's continued support for Gianforte.

Jacobs also said that he'd felt "shock and dismay" at hearing the president praise the man who had attacked him. "I always knew that was a possibility, but then there's the process of how you deal with it and then how you actually call up and tell your family that the president is mocking you when you've been the victim of a crime."

In recent months, President Trump has been praising Giantforte as "a fighter." Most recently, he lauded the Montana representative as "great," "a tough cookie," and his "kind" of guy while speaking at a rally in Missoula on Thursday. "Never wrestle him. Never," Trump said of Gianforte. "Any guy that can do a body slam, he's my kind of... he's my guy."

But Jacobs rejected the president's characterization of Gianforte, pointing out how the congressman allegedly lied about the incident to police in his initial statement. "He lied about me until he realized there was audio and eyewitnesses," Jacobs said. "The police actually asked me afterwards, was there anything about the congressional budget office that might set him off, and then lie about it. That's not the action of a tough cookie, that's the action of a coward."

According to The Guardian, a police report for the incident showed Gianforte had initially told police that it was Jacobs who had initiated physical contact by grabbing him and spinning in a way that pulled the congressman down on top of the reporter. But accounts from a team of Fox News reporters that had witnessed the incident as well as audio recorded by Jacobs contradicted Gianforte's claim.

But Jacobs also said that he's concerned about the signal Trump's praise of Gianforte may be sending to other countries. "My concern is not about my situation as much as it with Jamal Khashoggi and everything going on in the world," he told CNN. "The signal this sends about how the United States and how the president of the United States views journalists when 44 journalists have been killed this year is what's really the concern."

After denying any involvement in Khashoggi's disappearance for well over a week, Saudi Arabia has now claimed that the Washington Post columnist was killed during a fistfight with at least a dozen Saudi officials at their consulate in Istanbul, Turkey, CNN has reported. While President Trump has reportedly said he found Saudi's explanation credible, a number of lawmakers in Congress remain skeptical.

"What I'm going through is not fun," Jacobs continued. "But there are people reporting all across the world right now who are actually in fear of their lives and what this is does is [give] a blank check for governments who want to crack down on a free press in places that don't have the First Amendment."