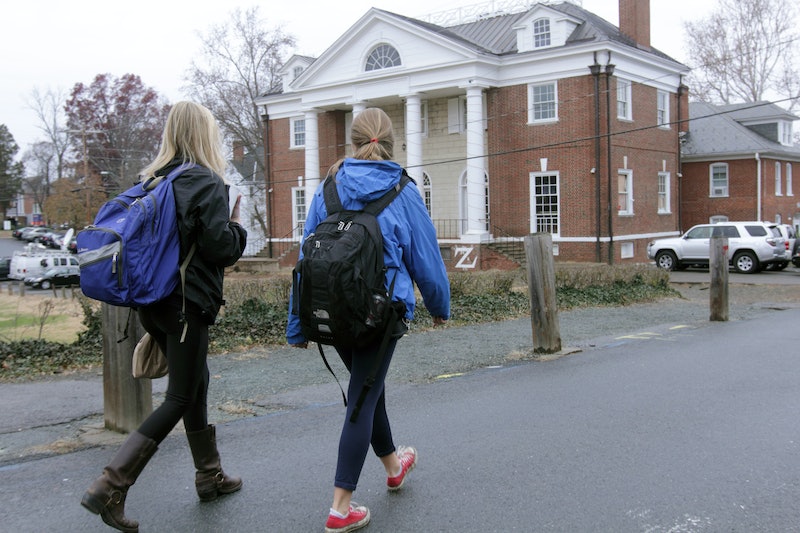 On college campuses, survivors of alleged sexual assault are increasingly facing an additional hurdle after reporting an incident — the possibility of a defamation lawsuit from the accused. The increased frequency of defamation lawsuits against survivors means that reporting an alleged sexual assault on campus is riskier than ever — and that survivors are even further disincentivized to come forward with allegations.

Buzzfeed reported on Tuesday that professionals who work on college sexual assault cases, including lawyers and college administrators, say that defamation lawsuits, in which the accused alleges that the victim has damaged their reputation, are becoming increasingly common. Scott Schneider, a higher education legal consultant, told BuzzFeed that, while the filing of defamation lawsuits in sexual assault cases used to be rare, it has now become almost "reflective" for those who are accused.

Colby Bruno, a lawyer at the Victim Rights Law Center, also echoed this sentiment to Buzzfeed, saying that, just a few years ago, only around 5 percent of her cases related to campus sexual assaults involved the accused suing the alleged victim. Now, over half of Bruno's cases involve a defamation lawsuit.

Defamation lawsuits can have substantial negative implications for accusers, particularly financial ones. Indeed, Buzzfeed cited several cases of women who faced massive legal bills as they sought to defend themselves in defamation lawsuits filed by the person they had accused of sexual assault. One woman, a Ph.D. student at the Washington University (known as Jane Doe in the article), said she has spent nearly $20,000 to fight a defamation lawsuit filed against her by her ex-husband, whom she accused of sexual assault in 2015.

Doe had accused her ex-husband of raping her while they were both students at Washington University and the school found that he had violated campus sexual assault policies — and put his already-completed law degree on hold for two years. A year later, Doe's ex-husband sued her, accusing her of hurting his reputation and career.

Doe described the re-traumatizing nature of the defamation lawsuit to BuzzFeed, saying, "I thought I was done suffering at the hand of this person ... I thought he was done making my life miserable. All of a sudden I'm being sued." She also noted the financial toll that her legal bills stemming from the lawsuit has had on her, saying "He's suing me for money that I don't have ... I'm a grad student, I don't make very much money, and he knows this."

Many experts worry that the increased frequency at which survivors of sexual assault face defamation lawsuits, like in Doe's case, will further discourage reporting. Survivors of sexual assault (on campus and beyond) already face a myriad of hurdles when it comes to reporting their assault, including victim blaming, stigmatization, and officials not taking their accusations seriously, among others. This is just part of the reason why so many sexual assaults already go unreported. Now, the increased likelihood that survivors could also face a potentially costly and emotionally draining lawsuit from those they accuse of assault could mean that they will now be even less likely to come forward.

Moreover, Buzzfeed reported that sometimes even being threatened with a lawsuit will cause survivors who have already reported their alleged assault to withdraw their claims. Brett Sokolow, a lawyer who runs the Association of Title IX Administrators, told Buzzfeed that lawyers are increasingly using lawsuit threats as a strategy in assault cases.

I'm hearing lawyers talk more about it as a strategy, even if they don’t use it ... I'm aware of 10 to 12 of those in the last two years [in which women have withdrawn their claims after facing a defamation lawsuit threat] and I am sure there are many more I do not know about.

While many worry that the threat of defamation lawsuits could further silence survivors of alleged sexual assault, there are some who claim the lawsuits are necessary to protect people from being falsely accused of assault. For example, Eric J. Rosenberg, an Ohio attorney who often represents students accused of sexual assault, told Buzzfeed that he has "seen his clients' lives destroyed by false allegations" and that he has "zero tolerance for sexual assault, but there's got to be a ramification for destroying someone's life. Sometimes the only way to remedy the harm done in these cases is to sue the accuser."

Betsy DeVos, the U.S. Secretary of Education, has also echoed similar sentiments about false accusations when sharing the rationale behind withdrawing Obama-era protections for survivors of alleged sexual assault on campus. DeVos has implied that schools have been too quick to take action against those accused of sexual assault and stressed that the rights of the accused (and the rights of survivors) must be protected.

Overall, it is clear that reporting sexual assault on college campuses has certainly not become any easier. Time will tell if defamation lawsuits continue to become increasingly standard practice in alleged sexual assault cases or if more protections are eventually put in place to make sure that the threat of a lawsuit does not discourage the reporting of an alleged assault.