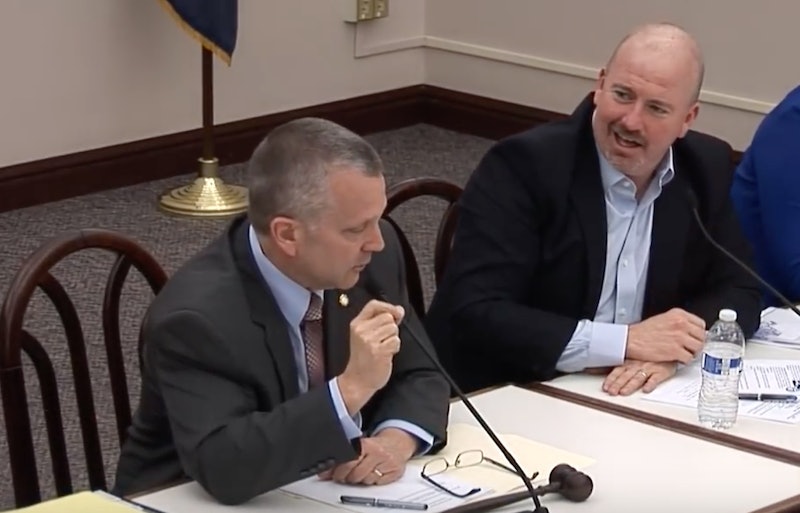 A conservative Pennsylvania lawmaker has raised eyebrows this week after making an unnecessary and seemingly homophobic comment to a fellow politician. After a Democratic councilmember touched his arm, the Republican said "I don't like men" and suggested the fellow lawmaker was gay.

The comment came during a committee meeting on Tuesday, during which State Rep. Matt Bradford — a Democrat — briefly placed his hand on the arm of Republican Rep. Daryl Metcalfe. The exchange seemed innocent enough (in fact, a look at the video of the moment in question shows that the arm-touch lasted approximately one-and-a-half seconds). Still, it prompted Metcalfe to respond viciously.

"Look, I'm a heterosexual. I have a wife, I love my wife, I don't like men — as you might," Metcalfe said. "But stop touching me all the time. Keep your hands to yourself. If you want to touch somebody, you have people on your side of the aisle who might like it. I don't."

Bradford laughed the comment off, saying he only wanted to "beg for [Metcalfe's] permission" to speak.

Metcalfe's suggestion that anyone who touches the arm of another man must be gay led many to express their outrage via social media.

Pennsylvania Gov. Tom Wolf, a Democrat, released a statement on Twitter saying Metcalfe's comments were "offensive & discriminatory" and "part of a disturbing pattern of behavior." He added that House leadership should "re-examine whether it is appropriate for him to continue controlling a committee that oversees civil rights legislation."

The comments also drew the ire of the Pennsylvania Democratic party, which released a statement on Tuesday calling for Metcalfe's resignation. In the statement, the group's spokesperson, Brandon Cwalina, called Metcalfe "a walking, talking embarrassment to Pennsylvanians" who "doesn’t deserve the honor of serving in public office.”

Pennsylvania Rep. Brian Sims – a Democrat and the state's first openly gay legislator — wrote on Facebook that Metcalfe was "the most homophobic, transphobic, racist, sexist, xenophobic member" of the state's government. Sims added that Metcalfe was wasting taxpayer dollars "to interrupt a meeting to announce his sexual orientation.”

Metcalfe is no stranger to controversy, having come under fire for controversial comments in the past. And it's not the first time he's been asked to resign. The Pennsylvania Democrats asked Metcalfe to step down in the past over what they called his "repeated racism." The group cited instances in which the Republican lawmaker asserted that a "white nationalist ... is a lot different than a white supremacist" while throwing his support behind a bill that would declare English to be Pennsylvania's “official” language. At the time, Metcalfe was defending his choice to invite a white nationalist to testify at a legislative hearing about the bill.

Despite the backlash, Metcalfe doubled down on his comments, telling Pennsylvania publication TribLIVE that he doesn't know whether Bradford is gay (he's married to a woman, according to his website), "but I know from him touching me all the time that he indicates he likes to touch men.”

Metcalfe also attempted to draw a parallel to recent sexual harassment allegations against lawmakers, as well, saying that Bradford "continues to touch an elected leader when he's been told to stop," Metcalfe said.