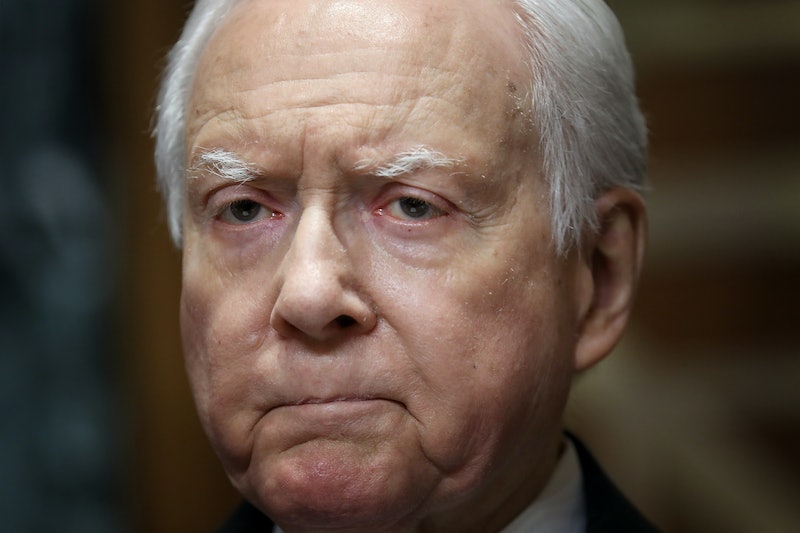 In a speech delivered Thursday, Sen. Orrin Hatch of Utah seemed blissfully unconcerned about how his remarks on Obamacare might be received outside staunch partisan circles. Besides calling the health care legislation the "stupidest, dumb*ss bill" he'd ever seen, Hatch also called Obamacare supporters the "stupidest, dumb*ss people" he'd ever met.

UPDATE: Hatch later apologized for the "stupidest, dumb*ss" comment. "Yesterday, I made a poorly worded joke about Obamacare supporters — a joke that was not reflective of my actual feelings towards my friends on the other side," he said in a statement, as quoted by NBC News. "Throughout my term of service, I have always recognized the importance of civility, particularly in engaging with those of different political perspectives. While I occasionally slip up, I believe that my legislative record reflects my commitment to bipartisanship and civility much more than my flippant, off-the-cuff comment.”

Hatch announced in January his intention to retire after the current term. As of now, he's the most senior and longest-serving Republican senator at 83 years old.

His speech was given at the American Enterprise Institute, a conservative think tank in Washington, D.C. In his remarks, Hatch also celebrated the Republicans' successful repeal of the individual mandate that was "established under that wonderful bill called Obamacare."

In case anyone mistook his "wonderful" adjective for a genuine compliment, Hatch clarified: "Now if you didn't catch on, I was being very sarcastic."

Hatch self-identifies as the sole senator to back President Trump from the get-go. Even when Trump exaggerated Hatch's already generous support by falsely claiming the senator said he was the "best president in history," Hatch responded with grace: He said he'd told the POTUS his presidency "can be" the greatest in history. The senator's take seemed to be that it was a simple matter of misunderstanding between two mutually admiring friends.

Hatch's name-calling of Obamacare supporters is by no means the first time the Utahan has vocalized his opinions. He once called President Clinton a "jerk," and during the confirmation hearing for Supreme Court Justice Clarence Thomas, the senator even turned on his close Democratic friend, Sen. Edward Kennedy. Hatch infamously told Kennedy that if he went after Thomas for inappropriate behavior, then Hatch had "a bridge to sell you in Massachusetts." Though Hatch denied it, almost everyone read the remark as a reference to a fatal car accident that Kennedy had been involved in.

Hatch also appears to be a fan of the word "dumb*ss." He's cited as using it to refer to a proposal to subpoena Justice Department records on the scandal-plagued Abu Ghraib prison. That was over a decade ago.

Like Trump, Hatch eschews normal sleep hours. Until he turned 69, he regularly slept nightly for just four or five hours, he told press. Since then, Hatch indulges in a whopping five or six hours per night, every night, he says. Even in that tiny frame of sleep time, Hatch reports he'll awaken to write down a thought or idea. The term "workaholic" might actually be an understatement to describe him, according to those who know the senator well. Hatch himself told The Deseret News, "I don't waste a second."

Former Republican presidential candidate Mitt Romney is running in Utah for Hatch's open seat, a race he will almost certainly win. And it's such a prospect that many believe drove Trump to implore Hatch not to leave the Senate just yet.

Romney has in the past been an outspoken Trump critic, stepping in during the presidential primaries to exhort rank-and-file Republicans not to give in and accept him as their nominee. But while Romney also spoke out against Trump on other occasions, the two appeared to smooth things over while Romney was under consideration for the secretary of state position within Trump's cabinet. More recently, Trump endorsed Romney in the Utah Senate race over Twitter, and Romney thanked him "for the support."

Still, Romney might want to keep a wary eye on Trump, should he indeed take over Hatch's seat. The president apparently keeps a detailed list of Republicans who cross him, and there's no way Romney's name would escape such an account.

Hatch, on the other hand, has the president's approval, and no "dumb*ss" comment about Obamacare supporters is likely to change that.