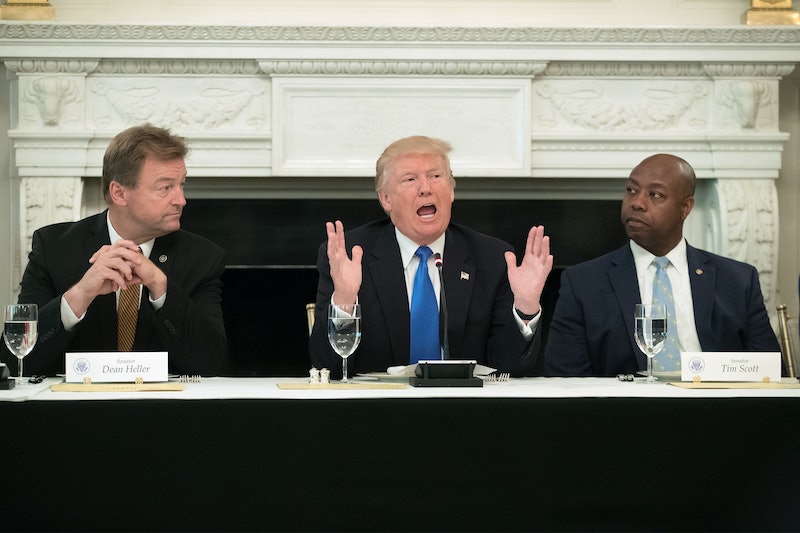 On Thursday night, President Trump surprised many in Washington, D.C. — including much of his own party — by ending the cost-sharing reduction (CSR) subsidies to low-income people the government had been paying as part of the Affordable Care Act (ACA). The move could plunge the insurance markets into a new chaos, as a funding stream that insurance providers had expected will suddenly disappear. Trump has taken predictable criticism from Democrats for what seems like a move to deliberately stop Obamacare from working. With many from the other party joining them in expressing concern for how this move could affect constituents who buy their health coverage through the ACA markets, some Republicans are reportedly concerned that Trump's move on Obamacare will make things difficult for them.

Cost-sharing subsidies are payments to insurance companies that reimburse them for the discounts they are required by law to offer low-income enrollees. Even without the subsidies, the insurers have to give the discounts anyway, so taking the money away will almost certainly lead to higher premiums. For Americans under 400 percent of the federal poverty line, those cost increases won't felt directly, since the government subsidizes premiums by more if their price goes up. But this means that middle and upper income Americans will feel a price hike, and that because of the subsidies that the government pays automatically, it will cost more for the government than paying the cost-sharing reductions, according to the Congressional Budget Office.

There seems to be very little upside for Republicans for this change. If they were barreling towards a repeal of Obamacare like they were this summer, this might be a useful piece of bargaining — beginning to dismantle the law as they get rid of it, and using the sticker shock of higher prices to argue that the system needed to be ended. But with Republicans having seemingly given up on trying to do that after multiple failures, all this does right now is hurt constituents.

Some top Republicans have expressed fear that Trump doing this will not only lead to worse health outcomes for their voters, but that they will be blamed for the fallout. "If people lose their cost-sharing reduction payments — their subsidies — it's going to be pretty hard to blame a former president — Barack Obama — for that," Representative Charlie Dent (R-PA) told NPR. Polling suggests he's right — 60 percent think Trump is trying to sabotage the law and a strong majority want him to fix it.

Back before Trump pulled out on CSRs, many Republicans in Congress were trying to get him not to do so.

This is a remarkable switch from Congressional Republicans, who argued before that the CSR payments were illegal, since they weren't directly appropriated by Congress, which Constitutionally has the sole power to approve spending. The House of Representatives sued President Obama over paying CSRs, and judges seemed to be leaning towards agreeing with them, though a court decided the continued payment of them shouldn't be blocked until the case is fully decided.

Republicans in Congress, as is the case with many of their complaints against Trump, could solve this relatively easily if they wanted to. They could join with Democrats in passing a bill that appropriates money for CSRs, taking the decision over whether they should be paid away from the president and making it automatic. This was included in several of the Obamacare replacement bills that Republicans tried to get through Congress in the summer. And it would almost certainly included in the bipartisan fix that Senators Lamar Alexander (R-TN) and Patty Murray (D-WA) have been working on that would aim to fix some of Obamacare's problems without dismantling it.

But even considering passing a bill that funds CSRs or fixes issues with the ACA puts Republicans in a tight spot. For nearly 8 years, they've consistently attacked Obamacare, and they also repeatedly referred to the CSRs specifically as a "bailout" for insurance companies. To turn around and fund CSRs and prop up Obamacare would be a betrayal of much of the rhetoric they've been continuing for a decade.

Republicans are in a similar pickle with regards to Obamacare as they are to DACA — if they do nothing, something will happen that most Americans don't want, and they will be blamed for it. If they fix the problem, they'll betray the promises they made to their most ardent voters for years, at a time when they haven't accomplished many of the goals they hoped to achieve with control of government. Both paths seem to head towards political fallout.

And like with DACA, Republicans are in this position because Trump decided to end an Obama-era program unilaterally, without a plan from Congress about what to do afterwards.