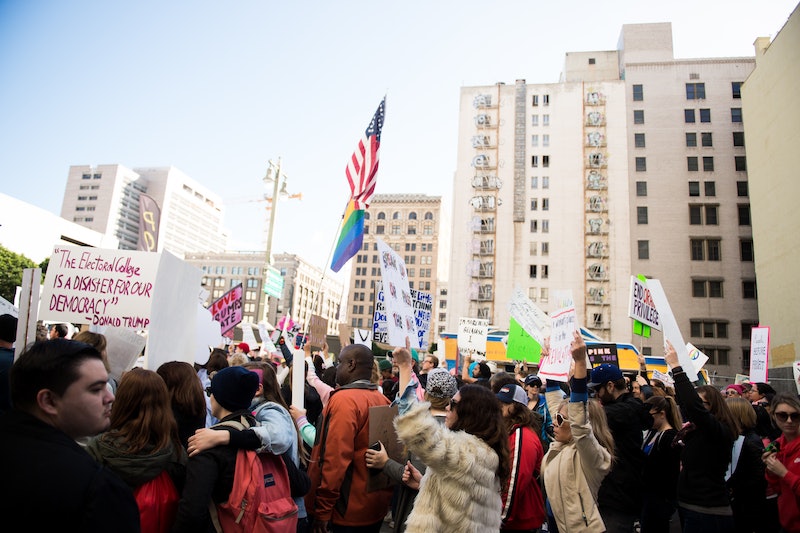 Since Donald Trump took office, organized protests have been a visible part of his presidency. The day after his inauguration, millions of women marched worldwide to stand up for their rights. After Trump signed an executive order restricting immigration, protests broke out at airports across the country. Various other protests have been carried out since then, and more are anticipated in the coming months, but the backlash to the significant numbers of people standing up against Trump has begun. Lawmakers are proposing legislation to crack down on protests on the state level.

While protests have certainly occurred before Trump's presidency — most notably and recently for Black Lives Matter — the frequency of protests has risen in the last few months. And now Republican lawmakers in at least 18 states have introduced or have plans to introduce bills that would affect protestors. Much of the legislation has to do with punishments for obstructing traffic, though there are also some other targeted bills for specific activities.

In Arizona, the state Senate approved a bill that would criminalize organizing an event that turns into a riot. Violators could face racketeering charges. The Associated Press noted that someone could be charged even if he or she does not participate in the actual riot. In Missouri, a lawmaker proposed a bill that would make it illegal to wear a mask during an "unlawful assembly" or when rioting.

Other states are taking a different approach with bills to give drivers who hit protestors immunity from civil liability as long as it is unintentional. In January, Minnesota lawmakers voted for a law that would place financial liability on protestors for police costs if demonstrations were considered "illegal" or a "nuisance" by a court.

While many of the bills have either died in the Senate or are still pending, it's truly frightening to see them even be proposed as law. Some lawmakers behind these bills claim that they are a reaction to "paid protestors," who they claim are being compensated to provoke riots at rallies. However, there is no evidence that links turnout at public protests or rallies to paid actors. And restricting mass amounts of people because of the actions of a few outliers is probably not the right way to go about enforcing order in the community.

Expanding the ability to criminalize protesters is a dangerous path to walk down. Americans have a right to protest, and it's essential that expression of opinion and speech be protected under this administration. Rather than working to propose laws to punish those protesting, maybe these lawmakers should spend some time listening to their constituents and figuring out exactly why they feel passionate enough to protest and perhaps work with them to find a solution so that the protests aren't needed in the first place.