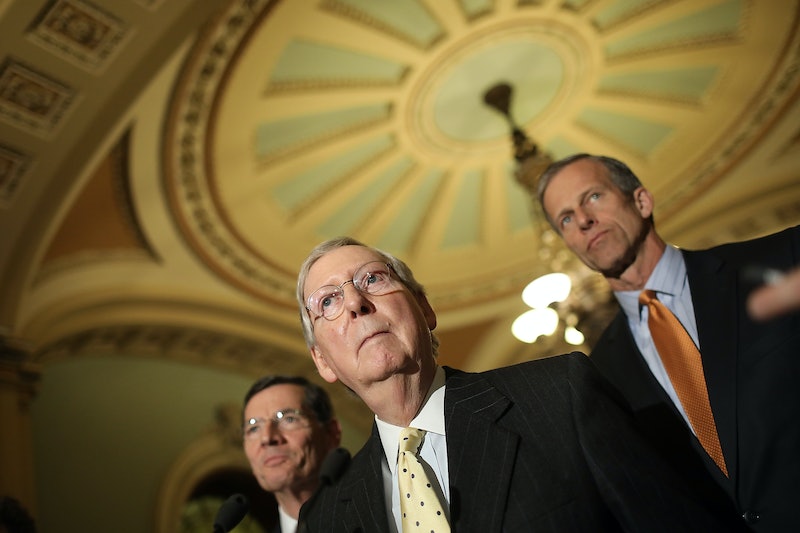 As President Donald Trump's 100th day in office approaches, Republicans have introduced an amendment to their healthcare plan in hopes of reviving it. The Republicans' newest healthcare plan to repeal and replace Obamacare not only allows state insurance marketplaces to waive out of crucial Obamacare protections, but, ironically, actually preserves these protections for members of Congress and their staff via an exception to the amendment.

When Obamacare was initially launched, members of Congress and their staff were required to use the marketplace for their insurance (with some exceptions) as a means of demonstrating that marketplace insurance provided good, quality coverage. This means that many members of Congress have Obamacare and that their plans are subject to legal changes that affect Obamacare. That is, until Republicans included a Congressional exemption in their latest amendment to the healthcare plan.

The new Republican healthcare amendment, which was introduced on Tuesday, would allow states to choose if they desire to waive out of key Obamacare protections meant to shield Americans from mistreatment by insurers. Some of these protections include requiring insurers to not charge those who have preexisting conditions more money for healthcare coverage and mandating that insurers provide minimum essential benefits for coverage, like maternity care and prescription drug coverage. Thus, if the Republican healthcare amendment did indeed pass, insurers could once again resume providing "skimpy" healthcare plans to Americans which cover few services and/or charge those with preexisting conditions far more money to attain coverage that may not even be comprehensive.

While this plan would seemingly negatively affect Americans, and, indeed, would likely result in even more uninsured citizens than the 24 million initialy predicted under the first iteration of the American Health Care Act, Republicans have sought to ensure that they (along with their staff) are not subject to the revocation of Obamacare protections that could result from the passage of this amendment.

According to Vox, the healthcare amendment dictates that members of Congress and their staff are actually exempt if states decide to waive Obamacare protections around cost of insurance coverage and minimum essential benefits. This means that, if this amendment were to pass and a state waived these protections, a citizen living in that state could endure higher healthcare costs and far less comprehensive coverage, while a congressperson or congressional staffer living in that same state would be exempt from these changes and could essentially maintain their old Obamacare plan.

While it is not at all clear whether this amendment actually has the votes to pass the House, the fact that Republicans who designed the amendment sought to potentially strip healthcare protections for everyday Americans while maintaining them for themselves and their staff is, in my opinion, highly disconcerting, to say the least. This move also speaks volumes about the importance of Obamacare protections — many Republicans seemingly believe that these protections are important and valuable, just not for everyone.