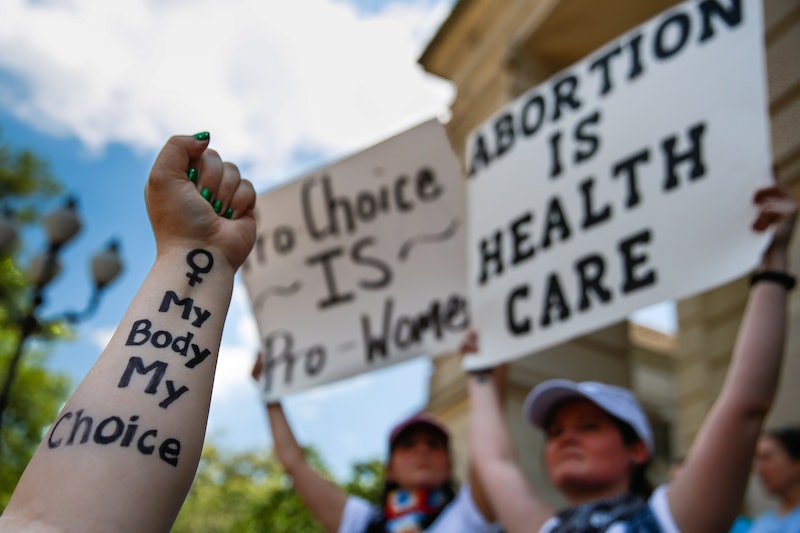 It's no secret that abortion access can impact a person's life, career, or even finances, but a new study says that it may also impact their physical health. Recently published in the Annals of Internal Medicine, research on women's health and abortion suggests that denying them that option could have long-lasting health effects, and make them more prone to chronic illnesses.

"Although some argue that abortion is detrimental to women's health, these study data indicate that physical health is no worse in women who sought and underwent abortion than in women who were denied abortion," the researchers wrote in their abstract conclusion. "Indeed, differences emerged suggesting worse health among those who gave birth."

"There were no significant differences in self-rated health, chronic pain, or obesity between women who had a first-trimester abortion and those who had a second-trimester abortion," researchers wrote, according to Pacific Standard. "However, there were several significant differences in trajectory between women who had an abortion and those who gave birth."

Researchers on the project referred to data collected during the Turnaway Study, Pacific Standard reports, which was conducted by researchers at Advancing New Standards in Reproductive Health (ANSIRH). That study suggested that denying pregnant people abortions is not only associated with long-term negative health effects, but also, among other things, her income level. Specifically, the Turnaway Study found that people who were denied abortions were four times as likely to be at or below the poverty level, and three times as likely to be unemployed, according to a fact sheet published by researchers. That said, the potential health consequences are not to be underestimated.

"Compared to women who receive a wanted abortion, women who are denied experience more immediate anxiety; more serious health complications from pregnancy such as hemorrhage, eclampsia, and death; higher likelihood of continued violence from the man involved in the pregnancy; lower full-time employment; and, despite increased use of public assistance, greater poverty," Turnaway Study Director Diana Greene Foster, who also co-authored the study published in the Annals of Internal Medicine, wrote in an op-ed for Rewire last fall.

Researchers also found that having an abortion did not appear to have a negative effect on the health of the people they tracked. Specifically, the Turnaway Study concluded that people who had abortions were not more likely to increase their use of alcohol, tobacco, or drugs, per the fact sheet. Similarly, they were not more likely to develop depression, anxiety, or have suicidal thoughts.

The studies' results come at a time when a handful of states in the country are making moves to limit abortion access in their borders. But, according to researchers, this could hurt pregnant people's health, not help it.