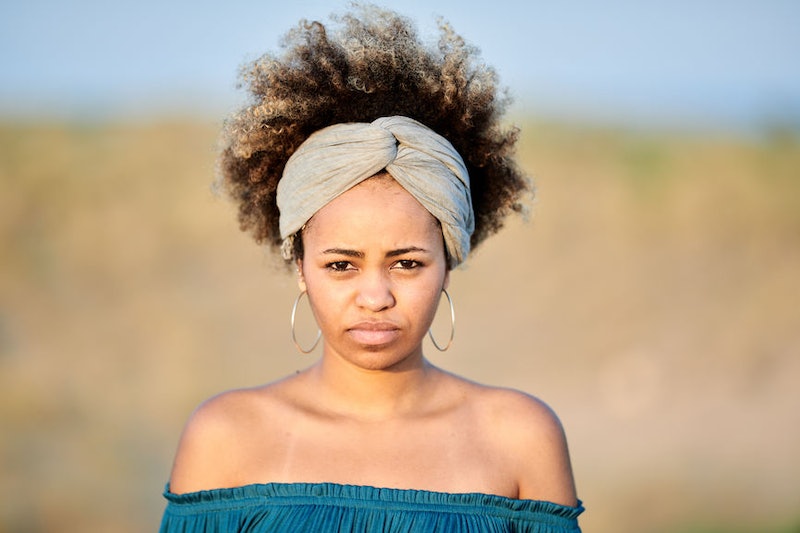 Throughout my life, I have been criticised for my neutral facial expression. In my head, I look radiant and happy with life. But apparently to others, I look, for want of a better word, disapproving. Although this makes me a little worried about the potential opportunities that I might have frightened off, it's not all bad news. You see, according to science, my resting bitch face may mean that I'm actually an expert communicator.

Resting bitch face — or RBF, for short — is a fully scientific term. Well, sort of. It was coined in 2009 by an Urban Dictionary contributor and went full speed in 2013, ending up in plenty of think pieces and allowing RBF sufferers to finally find their place in the world. (According to the Internet, that includes the likes of Emma Watson, Bella Hadid, and even the Queen.)

Yes, there are plenty of downsides when it comes to having a less than happy face but, according to statistician Rene Paulson, there is one major upside. You see, when people assume that you're feeling a certain way just from the expression your face is giving, you have to learn to express your thoughts and feelings in a different way.

I'm talking about the art of communication. "Instead of communicating to be understood, you have to communicate to not be misunderstood," Dr. John Lund said in a seminar some years ago. It took me a few minutes to get my head around that but it makes total sense.

Paulson expands on his point. Writing for Quartz, she explained how "women confronted by a world that automatically attaches negative attributes to their non-smiling face must quickly learn how to communicate. Women used to being constantly misunderstood focus more on the words someone says, rather than their tone, body cues, or facial expressions, ensuring a more effective flow of information between both parties."

This means that those with a constant resting bitch face have had to learn to speak more eloquently to ensure that there are no crossed wires. In a world where face-to-face communication is becoming less and less common, that's hardly a bad skill to have.

Science has also backed up the theory of misunderstanding. In 2016, Noldus Information Technology released facial expression recognition software that is able to specifically calculate whether you have RBF. Called FaceReader, it maps over 500 points on your face and can determine six basic human emotions: happy, sad, angry, scared, surprised, and disgusted.

After running a series of images through the software, the latter — otherwise known as contempt — appeared to be the deciding factor. As the results show, contempt makes up only three percent of the overall emotional expression on 10 'normal' faces. For those with RBF, it almost doubled to 5.76 percent.

It doesn't sound a lot and that's because it isn't. People with resting bitch faces aren't consciously displaying contempt. Other people simply perceive it to be that way. This led researchers to believe that the human brain is able to pick up even the faintest expression of contempt and react negatively toward it, therefore leading to many cases of misunderstandings.

Once a person has experienced enough negativity, they will soon adapt and learn how to communicate in a way that results in a positive response. Trust me, I can attest to this.

So, the next time someone criticises your RBF, know that it's not your fault but the fault of the human brain. And unfortunately, that's something you can't change.