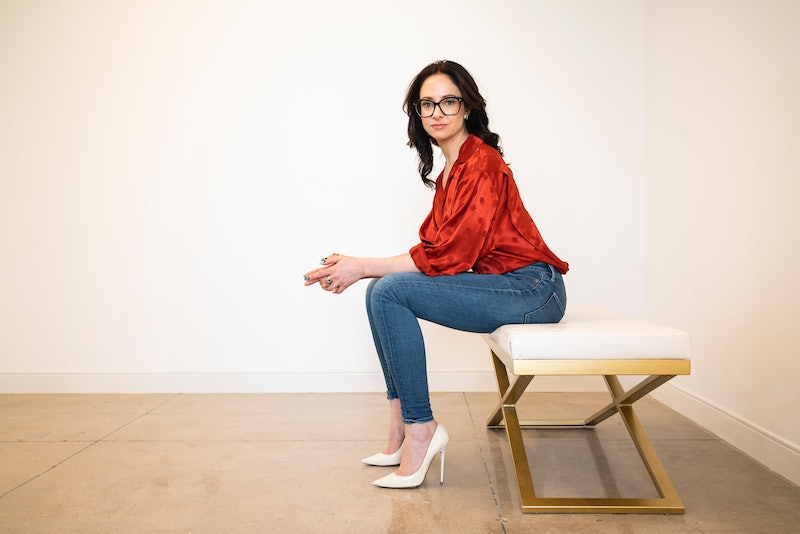 "In a single day, [a client] may receive 100 texts [from their offender], saying they love you, and want to destroy you, and let’s get back together, and I didn’t want to have to do this,” describes Carrie Goldberg, the writer, lawyer, and activist behind Nobody's Victim: Fighting Psychos, Stalkers, Pervs, and Trolls, in an interview with Bustle. "Then you get a notice from your bank stating that somebody changed your password. Then you’re logged out of your Facebook account and see that somebody has posted naked photos of you on your page. Then you get seven emails from friends saying they’d gotten an email from an anonymous account falsely saying you were arrested for child porn. Then your boss calls and says [your company’s] board of directors received the same messages."

These are just some of the things that clients of Goldberg’s victim’s rights law firm face, sometimes daily, when they’re being "trolled" by their offenders. From ex-boyfriends to internet strangers, these offenders are weaponizing the technology that nearly everyone uses to call their mothers, order lunch, take photographs, and navigate the world. Goldberg’s law firm is, in many ways, charting new territory by advocating for and with victims of sexual violence whose trauma is uniquely exacerbated by the internet and social media — doxing, digital stalking, revenge porn, sextortion, impersonation, and more. It’s this work that she writes about in Nobody’s Victim, alongside her own experiences of being a victim once herself.

"When my ex-boyfriend was stalking me, making false police reports, and threatening to have me raped by hired people, I was so scared and disoriented. I couldn’t eat or sleep, I developed intestinal problems; I was couch-surfing so he wouldn’t know where I was. I didn’t know what he’d do next," Goldberg tells Bustle. "I sought help from a couple lawyers. They were lovely people, but this was a really novel case for both of them, too. We were all trying to figure it out, grasping in the dark together."

Her goal, she writes in Nobody’s Victim, was to become the lawyer that she herself had needed.

Goldberg says she doesn’t blame her lawyers for not having the information or experience they needed at the time — electronic and online harassment is largely new terrain, even for the most experienced lawyers. It’s also what Goldberg’s firm, which she started in response to her own experiences with harassment, specializes in. Her goal, she writes in Nobody’s Victim, was to become the lawyer that she herself had needed.

"It was six months before my offender pled guilty and I got the final order of protection. And I felt helpless and hopeless and scared the entire time," Goldberg says. "There’s no worse feeling than knowing somebody out there is spending their time and resources trying to destroy you."

Goldberg has represented successful business people, struggling students, journalists, celebrities, and abortion providers — and it’s no surprise her clients are anybody and everybody, given that most people carry the mechanisms for this harassment around in our pockets and purses, all day, every day.

"When electronics are used as the weapon, every single buzz, ring, and notification becomes a menacing stimuli," says Goldberg. "It’s not just information that your phone is ringing. A ringing phone is a stimuli that zaps you and puts your adrenal system into overdrive. And it happens over and over and over again in a given day for people being stalked."

This puts many victims in a catch-22: while disconnecting from the digital world for a while might seem like a way to stop the flow of stimuli, the threat is still out there — and from a legal standpoint, every act of aggression needs to be documented. "On the one hand, it’s so important for our clients to be in communication because their safety is so at risk, but these devices are also delivery mechanisms for the abuse," Goldberg says. "So the relationships with tech become very ambivalent. [Clients] need to know when and how and where they’re being attacked, and to monitor that, so they can respond, remove content, report it, and stay safe. But at the same time, it is emotionally devastating."

"The underlying stalking my clients encounter is only one part of the trauma."

It’s important to Goldberg that she fight alongside her clients —in her book, she emphasizes that she battles not for them, but with them. It’s a distinction that is geared toward countering the disempowerment many of her victims face when dealing with near-constant harassment for so long.

"The underlying stalking my clients encounter is only one part of the trauma," Goldberg explains. "The process of getting legal relief — hiring a lawyer, going to court, dealing with law enforcement — that’s an additional layer of trauma that alienates them from the other people in their life. Just like their loved ones can’t fully appreciate the fear and fatigue my clients experience from the stalking, the cure is also something my clients are dealing with that separates them from everybody else in their lives. If a client feels like I’m doing everything for them to get [the harassment] to stop, the disempowerment will continue."

"If they see themselves as part of the fight, which they are, they have agency and can take ownership of and pride in the outcome."

It’s bringing her clients along for the fight — making them active participants in their legal cases, offering them strategies for documenting and reporting harassment, and helping them come up with the language needed to best tell their stories — that, as Goldberg writes in her book, transforms victims into warriors. "If they see themselves as part of the fight, which they are, they have agency and can take ownership of and pride in the outcome," the author says. “I don’t want to be a savior or a hero. I want my client to save herself. If she sees herself as the decision maker, the captain, then for the rest of her life she’ll know that she has the power, wherewithal, and focus to put a team together and vanquish an enemy. I am just one of the major weapons — the one with the technical skills to deal with enemies like this — in her quiver."

Goldberg’s victims, for the most part, identify as women. And while Nobody’s Victim is filled with myriad ways women are uniquely victimized, it’s also filled with reminders of the ways women’s voices, and women telling their stories, can lead to justice, change laws, and start to make the world a safer place for everyone. Goldberg’s clients are, on the whole, impossibly brave for sharing their experiences.

"Nobody should feel obligated to tell their story," says Goldberg, noting that there’s one of her stories in Nobody’s Victim that she’s still nervous about sharing. "For women, the shame may lie not only with the thing itself, but also with the act of sharing: will my family think I’m overreacting? Which friends might say I’m oversharing? What if people don’t believe me? Will there be retaliation? How do I even tell the story? If this becomes public, will I still be a desirable employee, girlfriend, friend?"

There are ways to tell one’s story that can ease that burden, Goldberg says — from starting small, by telling a trusted friend or a therapist, to writing it out or joining a support group. “All in all, sharing the story is scary as hell and a decision that everybody should feel is optional. Ultimately, it could be very relieving to get it out, bond you with people who know what you’re going through, and educate the world.”

After hearing Goldberg’s story, and those of her clients, one of your first questions might be: How do I protect myself? Nobody’s Victim details plenty of ways to monitor your own security and stay safe in the digital landscape — and Goldberg shared others with me as well; beyond the standard two-step authentication, complex passwords, cropping out your face in any nude photos, and making sure there are no visible diplomas (or other distinctly identifying information) in the background.

"The apps that facilitate in-person encounters pose the most real threat of stalking, rape, and murder," Goldberg says, noting that a disproportionate number of her clients meet their offenders on apps. "Dating apps are a catalogue for predators. Yes, of course, lots of nice people too. But we are all one bad date away from having our life upended by somebody hell-bent on our destruction. Avoid sharing anything personal in profiles that could enable somebody to figure out who you are, or where you work. Don’t use photos that can be reverse imaged and found on your Instagram. Don’t have indicators of affluence in your photos. If someone harasses you, don’t engage. If you wind up on a date with somebody who creeps you out, get out of there sooner rather than later, and don’t bother with an explanation or letting a person down easy. Please be conservative with letting strangers know where you live."

All-in-all, the purpose of Goldberg’s book is to change the law that she believes makes this all this possible in the first place: a decades-old legislation known as Section 230 of the Communications Decency Act of 1996, which essentially protects internet companies from legal responsibility for any content users post to their platforms. Goldberg argues it was written before anyone would have foreseen how ubiquitous having the internet in your pocket would become. Whether you agree with Goldberg's stance on Section 230 or not, it's clear that something must be done. "The tech industry takes no accountability for making the internet safer," Goldberg says. "Until we change the law, which is the purpose of my book, it’s up to us users to protect ourselves."

More like this
Romance Authors Are Mobilizing For Reproductive Rights
By Natalia Perez-Gonzalez
Mike Flanagan Teases 'The Midnight Club' In This Exclusive, Creepy Clip
By Grace Wehniainen
How To Politely Reject Someone Who Keeps Asking You Out
By Laken Howard and Lexi Inks
10 New Must-Read Books Out This Week
By K.W. Colyard
Get Even More From Bustle — Sign Up For The Newsletter