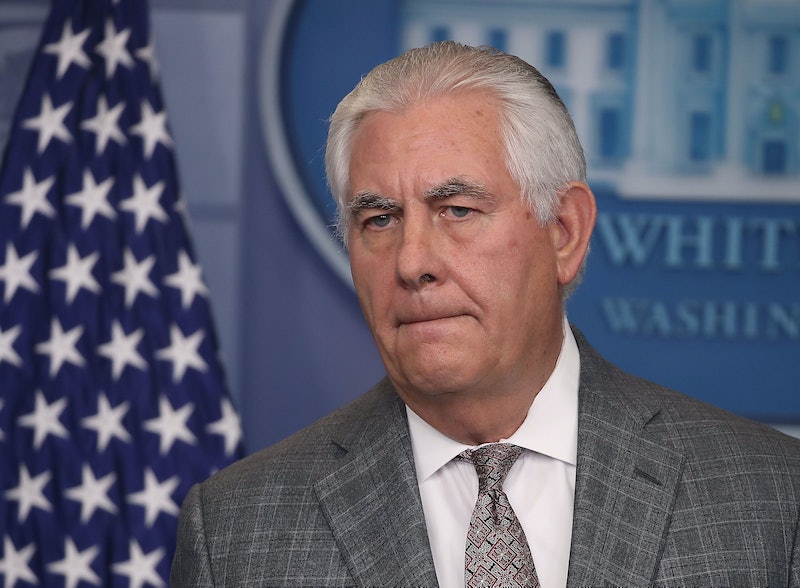 Throughout Secretary of State Rex Tillerson's tenure in the Trump administration, he's drawn scrutiny for his vision of the American diplomatic service. Specifically, the State Department has seen its staff reduced by considerable margins since he took over in February, both through resignations, and through more direction action from the man at the top ― Tillerson has fired many State Department diplomats lately, including most of its top-level women and minorities.

According to The New York Times, which published a report on the firings, resignations and the impact they're having, Tillerson decided to implement a 31 percent budget cut prior to taking over as secretary. This set the tone for a different sort of stewardship over the state department than seen in preceding administrations, with longtime, senior department employees being shown the door, or encouraged to resign by being offered cash buyouts.

The report also notes that Tillerson has implemented a hiring freeze, and is hoping to cut the State Department's staff by 2,000 by Oct. 2018, a sharp planned reduction planned with a deadline set for less than a year away. The efforts have reportedly been particularly damaging to the department's minority diplomats, with "most" of its top black and Latino employees being shown the door, many of them also women.

Tillerson's seemingly conscious effort to slash the state department's ranks have definitely been noticed in recent months, by lawmakers on Capitol Hill who're both skeptical of the approach, and seemingly perturbed that they haven't been consulted with.

The questioning from elected officials has been bipartisan, as well. Democratic senator Jeanne Shaheen and Republican senator John McCain both criticized Tillerson's leadership and his plans to reform the department through staff cuts earlier this month, writing a shared letter urging him to change course.

The failure to replace losses from the ranks of the Foreign Service due to attrition and resignations with promotions and the recruitment of new entry-level officers appears to be intended to reduce staffing levels. To date, however, Congress has not been consulted on the rationale for these decisions or the details of the Department of State's reorganization plans.

The letter also laid out the following recommendations to Tillerson, the biggest of which was this: halt the hiring freeze, and start rebuilding the diplomatic ranks.

Staffing is not the only area in which Tillerson has drawn criticism recently. Earlier this week, in fact, Reuters reported the existence of a memo by several U.S. diplomats alleging that Tillerson violated a federal law dictating America's stance on the use of child soldiers.

The dissent memo reportedly alleges that Tillerson acted outside the bounds of the Child Soldiers Prevention Act when he removed a trio of countries, Afghanistan, Iraq, and Myanmar, from a list of nations which utilize child soldiers.

As Reuters noted, State Department spokesperson Heather Nauert defended Tillerson's decision as being "[in] technical compliance with the law in the way he read it."

Tillerson has received some tacit support for his staffing cuts, at least, from the man at the top of the federal government. When President Donald Trump was questioned about the hollowing-out of the department in early November, he offered up a controversial response, remarking that he himself was "the only one that mattered" when it came to foreign policy.