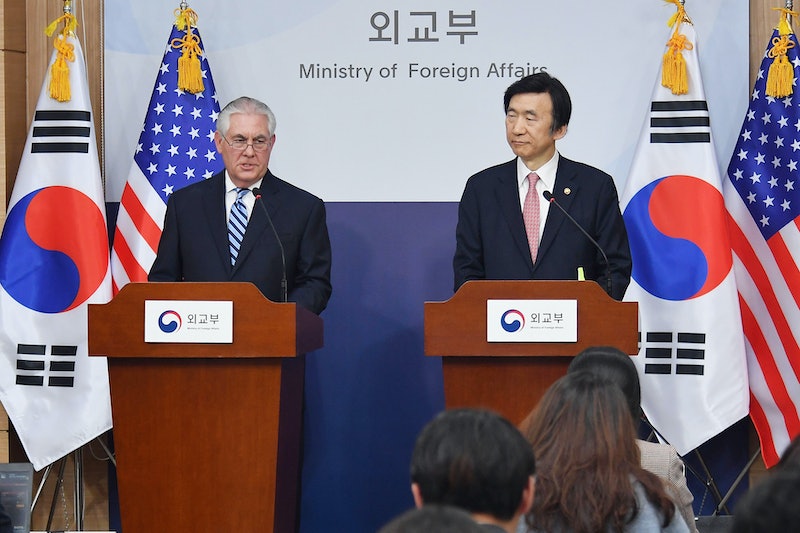 Secretary of State Rex Tillerson's recent statement on North Korea reads like something out of a script from a political satire. Responding to reports of a ballistic missile test conducted by the totalitarian regime, Tillerson released this:

North Korea launched yet another intermediate range ballistic missile. The United States has spoken enough about North Korea. We have no further comment.

To say this is a preposterous mode of communication from a serious White House would be putting it lightly. And preposterous, in the world of international diplomacy, can sometimes translate into actual conflict. As in, if regular American readers are perplexed, how might an unhinged North Korean dictator translate this type of flippancy that implies it's amateur hour at the State Department?

This is not a tried and trusted approach to international relations. State department employees (and official statements issued by them) are purposefully staid, usually boring, and almost always meticulously crafted to ensure they cannot be misread. The above statement by Tillerson appears to be precisely the opposite. Sure, maybe he ascribes to the "madman theory" of politicking. But it might be a tough road, trying to out-madman North Korean leader Kim Jong-un, the 21st century's most untested and nuclear-arms ambitious authoritarian.

President Trump is meeting with Chinese President Xi Jinping at Mar-a-Lago tomorrow and Friday. And according to Trump, this meeting will probably be tense. That's due in no small part to Trump's stance on trade tariffs, Taiwan, and relevantly, North Korea. Trump and his team are looking for China to start cracking down harder on Kim Jong-un, since they have the regional and economic leverage to do so much more effectively than the United States.

North Korea would register on zero radars if it weren't for their pursuit of nuclear arms. In the past year, Kim Jong-un has ignored multiple U.N. sanctions as he tests ballistic missiles capable of carrying nuclear warheads. If North Korea were to achieve that goal, it would pose an existential threat not only to America, but to the international order. As Sen. John McCain put it, "It keeps most of us up at night because of the immediate problem."

Trump will likely be asking Xi Jinping of China to step up economic sanctions on North Korea, in order to deter their nuclear program. The POTUS has also signaled he's willing to go it alone in order to take on North Korea, a risky move for anyone to make against such an unknown opponent.