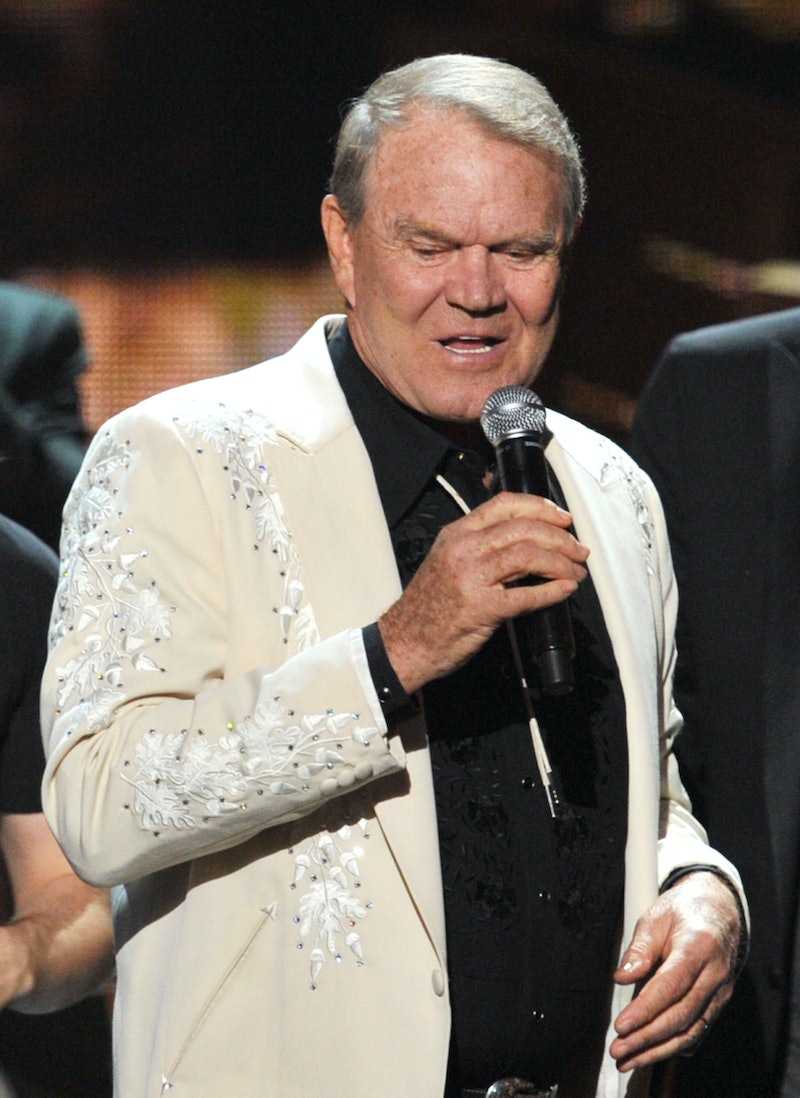 The music world has just lost another great. Glen Campbell has died at the age of 81, a rep for Universal Music Group confirmed to Rolling Stone Tuesday. His family also released a statement to the publication, reading, "It is with the heaviest of hearts that we announce the passing of our beloved husband, father, grandfather, and legendary singer and guitarist, Glen Travis Campbell, at the age of 81, following his long and courageous battle with Alzheimer's disease."

In a June 2011 interview with People, the legend, alongside his wife, Kim Campbell, first announced he was suffering from Alzheimer's. They also revealed he would be going on a farewell tour. "I still love making music," the musician said at the time, "And I still love performing for my fans. I’d like to thank them for sticking with me through thick and thin."

While chatting with the Tampa Bay Times (via Rolling Stone) in March 2016, his wife revealed that Campbell was relocated to a Nashville memory care facility. "Glen's getting great care; he's happy, he's cheerful," she said. "He's healthy but he has lost most of his language skills. He doesn't understand anything anyone is saying to him. But there's life and energy and community. He's there with other people — doctors, lawyers — who are all facing the same thing. I'm in a community with other family members who are going through the same thing." In addition to Kim, Campbell is survived by eight kids.

Campbell will forever be remembered for his many hit songs and for influencing country music in great ways. So much so, he was inducted into the Country Music Hall of Fame in 2005. As reported by Rolling Stone, over a six-decade career, Campbell sold over 45 million records and in 1968 he even outsold the Beatles.

Music wasn't the only thing Campbell was known for. He also served as host of The Glen Campbell Goodtime Hour, a variety series that earned him Golden Globe nomination in 1970. That same year, he was also nominated for another Golden Globe in the "Most Promising Newcomer — Male" for his role in the western True Grit starring John Wayne.

Let's take a moment to remember Campbell and his songs that will never be forgotten.

A forever favorite. It's even on the Guardians of the Galaxy Vol. 2 soundtrack.

According to Rolling Stone, this was his first Top 10 hit.

"Gentle On My Mind"

An oldie, but definitely a goodie.

"By the Time I Get To Phoenix"

A great slow one.

A song about a Vietnam War soldier, per Rolling Stone.

"I'm Not Gonna Miss You"

Campbell earned an Oscar nomination in 2015 for this song, which appeared in the documentary, Glen Campbell: I'll Be Me, about his Alzheimer's battle and final tour. The song is about his struggle with the disease and how he doesn't have much time left. This was also the last song he ever recorded in a studio, The Wall Street Journal reported in February 2015.

Glen Campbell, you and your talent will truly be missed.