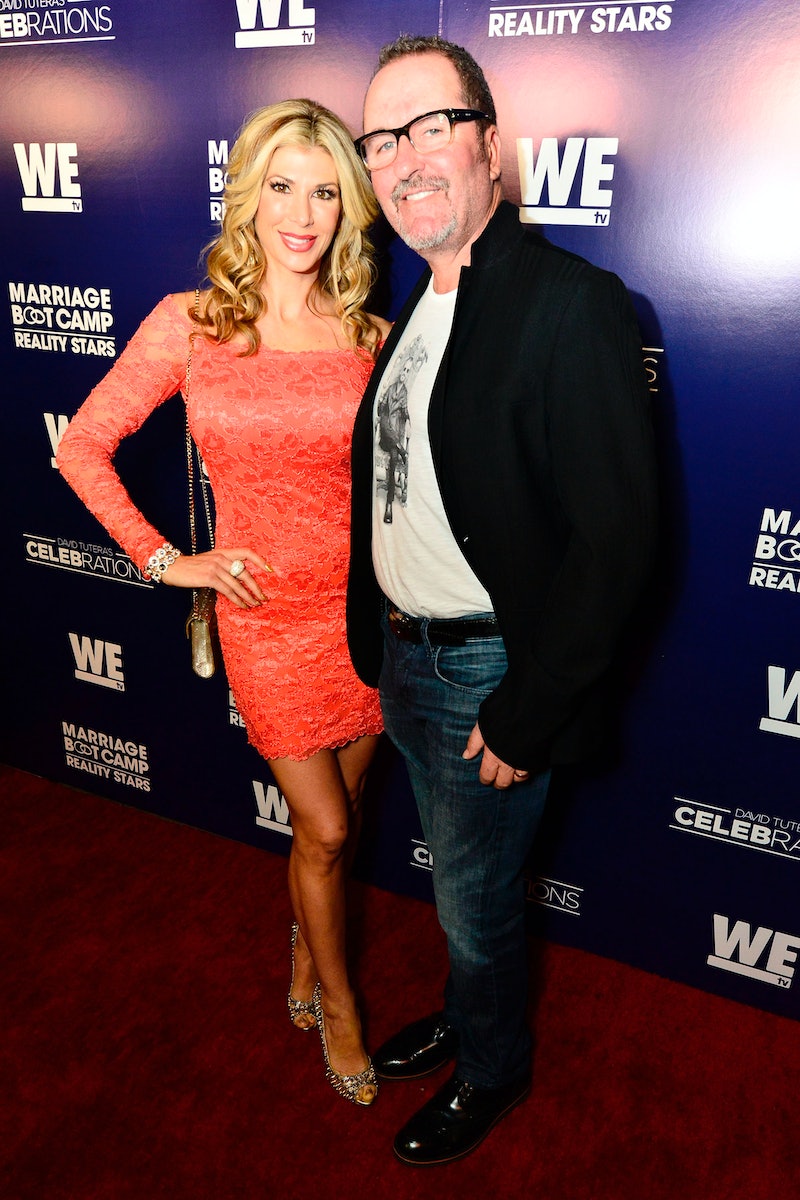 When Alexis Bellino returned to Real Housewives of Orange County on Oct. 8, she equated divorce to death. Even so, it does seem like she and her ex-husband Jim Bellino are in a great place these days. RHOC alums Alexis opened up about her divorce, saying she and Jim will always be friends during her Oct. 10 interview for People's Reality Check.

She told the publication, "We’ve been through it all. It’s been a year and a half now. We’ve worked out a good friendship." The former Real Housewife added, "I think we'll always be friends together until the day we die because we have three beautiful children together that we have to bring through this world." Then she rhetorically asked, "The best way to do it is to be friends, right?" Ultimately, Alexis and Jim seem to be putting "animosity and resentments behind" them.

At another point in the interview, Alexis said, "we got a divorce for a reason." However, she made clear that the reason was not related to filming Real Housewives of Orange County. Alexis told People, "For me, the show didn’t tear us apart more because it actually gave me something that was my own ... I know he feels that the show probably brought the marriage to an end."

On the Oct. 8 episode of Real Housewives of Orange County, Alexis discussed the divorce with cast member Emily Simpson. Alexis said, "I think in life when you’re with someone, there’s two options. You can grow apart or you can grow together. We grew apart."

Alexis continued, "It was just a really broken marriage for a lot of years. There just comes a time when you realize, it’s time to move on." And, it seems like they have both moved forward to a better place. When Emily asked if the co-parenting was going well with Jim, Alexis confirmed that it has been. She also said, "I love the relationship that I see between Jim and the kids."

This is a contrast to the couple that Real Housewives of Orange County viewers saw when they last appeared on the show in 2013, when they were still married. However, a lot has changed since then. In June 2018, TMZ broke the story about Jim filing for divorce. He cited "irreconcilable differences" as the reason for their split. The Bellinos were officially divorced in August 2018, which was also reported by TMZ. The couple has agreed to equal custody of their three children, a 13-year-old son named James and twin daughters Melania and Mackenna, who will turn 12 in November.

Now, Alexis is in a new relationship with Andy Bohn. The two of them became Instagram official in February 2019. She even told People's Reality Check that she has a relationship with his two kids. Alexis described their two families coming together as a "Brady Bunch family."

In addition to her RHOC cameo appearance, Alexis is a cast member on the upcoming season of Marriage Boot Camp: Reality Stars Family Edition. Along with her mother, Penelope Mount, Alexis will open up about her divorce from Jim and her parents' divorce, according to a video on the show's official site.

More like this
Andy Cohen Apologized To Larsa Pippen After A 'RHOM' Season 5 Reunion Dust-Up
By Brad Witter
'RHOSLC' Star Jen Shah Refuses To Do A Post-Sentencing Interview With Andy Cohen
By Brad Witter and Jake Viswanath
Lenny Hochstein's “Boob God” Reputation Bolsters His Multimillion-Dollar Net Worth
By Brad Witter
Everything To Know About 'RHONJ' Season 13
By Brad Witter and Jake Viswanath
Get Even More From Bustle — Sign Up For The Newsletter
From hair trends to relationship advice, our daily newsletter has everything you need to sound like a person who’s on TikTok, even if you aren’t.