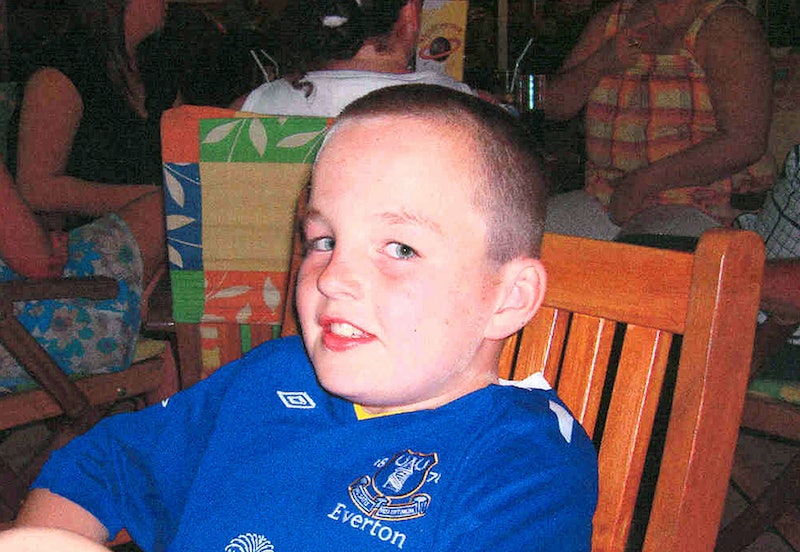 In August 2007 the death of 11-year-old Rhys Jones shocked the nation, and after a highly publicised police investigation, teenager Sean Mercer was found guilty of his murder. Channel 5's latest true crime documentary Rhys Jones: The Clues That Caught The Killer delves into one of Britain's most shocking crimes, and reveals just how Sean Mercer was convicted of Rhys' murder, despite the small amount of evidence available to police.

According to The Mirror, the tragic story of Rhys Jones first began in Croxteth, Liverpool, back in August 2007, when Jones was walking home after football training at the Fir Tree Boys Football Club. At around 7.30 p.m. that evening, three gunshots were fired across the Fir Tree pub car park during a gang turf war. The then 16-year-old Sean Mercer reportedly fired the shots from his BMX bike. The first shot managed to miss Jones, but the second unfortunately struck him in the back, leaving him seriously injured and unconscious.

As reported by the BBC, Rhys' mother rushed to the scene after hearing of the incident, and the 11 year old sadly died later that day. Shortly after the murder, Merseyside Chief Constable Bernard Hogan-Howe revealed that two arrests had been made in connection to the case — and asked the British public for their help. In a statement, he said, "The principal thing I need to get over to the public is we need your help, and we are not yet at all certain as to who committed this crime."

After an intense investigation, 18-year-old Sean Mercer was convicted of Jones' murder in December 2008, reports the BBC. Mercer was found guilty by a jury after four days of deliberations, and a nine-week trial at Liverpool Crown Court. He was sentenced to serve a minimum tariff of 22 years by the trial's judge, Mr Justice Irwin, who reportedly described Mercer as a "coward," and branded the other involved gang members "selfish and shallow criminals." Shortly after the verdict was read out in court, Rhys' father Stephen Jones said in an emotional statement, "finally justice has been done for Rhys."

As reported by the Guardian, six local gang members were also convicted of assisting an offender, among other charges, after allegedly helping Mercer escape the police for the months leading up to his arrest. Detective superintendent Dave Kelly, who led the hunt for Rhys' killer, gave a statement following the conviction of Sean Mercer. According to the Guardian, he said:

"Today Sean Mercer will be sentenced for the murder of Rhys Jones. Mercer's conduct showed total disregard for Rhys and others... he has shown no remorse whatsoever. I hope that this verdict will bring it home to him what he has done and the pain and suffering that he has caused."

As mentioned previously, Channel 5's newest crime doc will take a closer look into the criminal investigation, discovering what led to the eventual conviction of Mercer.

Rhys Jones: The Clues That Caught The Killer airs at 10 p.m. on Wednesday, July 3 on Channel 5.

More like this
Nicola Walker’s IRL Husband Is No Stranger To TV Screens
By Darshita Goyal
Laura Tott From 'First Dates' Married Her Long-Term Mystery Boyfriend
By Darshita Goyal
'The Capture' Is Finally Back – & S2 Looks Tense AF
By Sophie McEvoy and El Hunt
The Sean Bean Intimacy Coordinator Controversy, Explained
By Sam Ramsden
Get The Very Best Of Bustle/UK