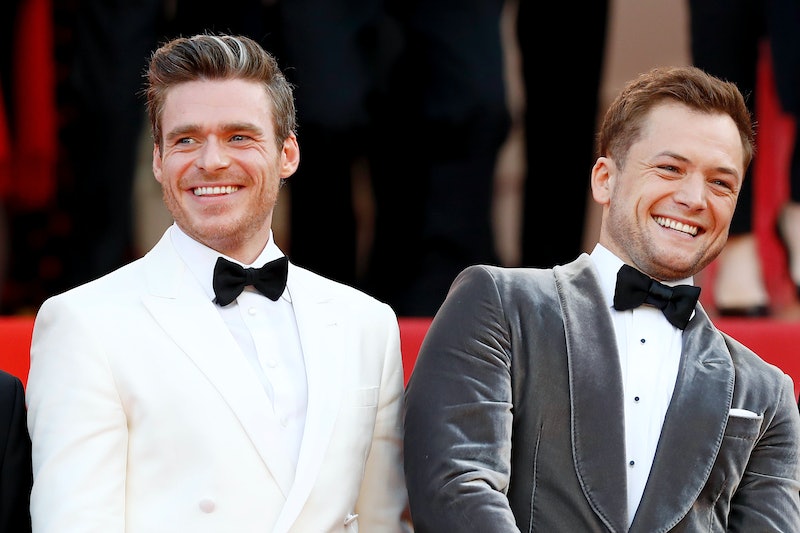 Ah, bromance. It's a beautiful thing. Two guys who lovingly flaunt their friendship for all the world to see — it truly warms the heart. After appearing in and doing press for their Elton John-inspired musical fantasy film Rocketman, it seems like Richard Madden and Taron Egerton's friendship has only just begun.

The two stars appear to have just as much chemistry off-screen as they do in the film, and fans can't seem to get enough of it. To be clear, though, while they were lovers in Rocketman — Egerton played John, and Madden played his manager/partner, John Reid — they're just good friends in real life. So, we're talking about platonic chemistry here. An incredibly charming and innocently flirtatious rapport, if you will.

By the way they act around one another, you'd think that they'd known each other forever. Surprisingly, though, they'd never met until they started filming Rocketman. "I’ve been aware of who Richard is for years," Egerton told Entertainment Weekly in a recent interview. "And funnily enough, one thing that’s quite interesting is people have been saying to us for years: You two would get on. And we’ve just never met."

But then, the stars aligned, and it sounds like they pretty much hit if off right away. So, in honor of one of Hollywood's most lovable bromances, let's take a look at some of their best moments together thus far.

When Egerton Talked About The First Time They Met

During an interview with BuzzFeed News at the end of May, Egerton revealed that he thought Madden didn't like him when they first met. "He came on set and he was in his trailer," he told the outlet. "And me and Jamie Bell went over to say hello to him. Yeah, I think I was just a bit paranoid and insecure."

When They Did An Interview Segment Together Titled "Meet My BFF"

First of all, what a hilariously adorable idea for an interview between two close costars. Second of all, the Entertainment Weekly segment is chock-full of info about Madden and Egerton's friendship, including where they had their "First Proper Hang," detail about their "First Fight," and "My BFF's Favorite Way To Spend Time Between Scenes."

Of Madden, Egerton told EW, "Richard's quite social. He's very attractive, and gets to know members of the crew and cast. He's a lot of fun." Egerton then prefaces to Madden that, "we can cut this if it isn't appropriate," but, "he likes to have a ciggie [cigarette] in between scenes," Egerton said, both of them giggling.

Of Egerton, Madden told the outlet, "Taron likes to remain quite focused, unless its something that we need to kind of, keep you distracted for," he gestured to his friend, who nodded in agreement.

All The Times Egerton Has Shared Pics Of Them On Instagram

So, between the two of them, Egerton definitely appears to take a more casual approach to social media. Madden's Instagram page is primarily work-focused — shots from editorial photoshoots, sharp and sleek-looking solo pics, and the occasional artsy architecture snap.

Now, Egerton posts his fair share of career-related pics as well, but he also sprinkles in photos of silly moments, up-close selfies, and his friends and family. His new BFF, in particular, has made quite a few appearances on his page ever since they met, and they're all downright adorable.

Perhaps the best one, though, is yet another from the Rocketman set, where Egerton jokes, at-length, that Madden, "is horrible." He then explains that the photo he shared of the two of them "was taken on his last day of filming," and that he was "so relieved that [Madden] was finished and I didn’t have to look at him or talk to him any more; I couldn’t stand another moment in his company. He was jealous and bitter because my hair was better than his and I have more followers on Instagram. I’m just thankful that I never have to spend another moment in his company." Ha! Yeah, right.

All The Times They Hit The Red Carpet Together For Rocketman

Seriously — all the times. Look up any of Rocketman's international premieres; look up Cannes; heck, just Google "Taron Egerton Richard Madden red carpet." If you do, you'll undoubtedly find a whole slew of photos that show them grinning, goofing off, or genuinely just like, enjoying each other's company — all while dressed to the nines.

When They Did Carpool Karaoke

Every second of their Carpool Karaoke episode is pure, unfiltered, bromantic gold. While Egerton and Madden drive around London, they belt out songs by David Bowie, George Michael, and Elton John, and occasionally make pit stops to get silly at scenic sites. And by "silly," I mean they like, danced *all* up on one of the ever-stoic guards at Buckingham Palace, and it will definitely make you giggle.

Can you believe this is just the beginning of their beautiful bromance? It can only get better from here on out.