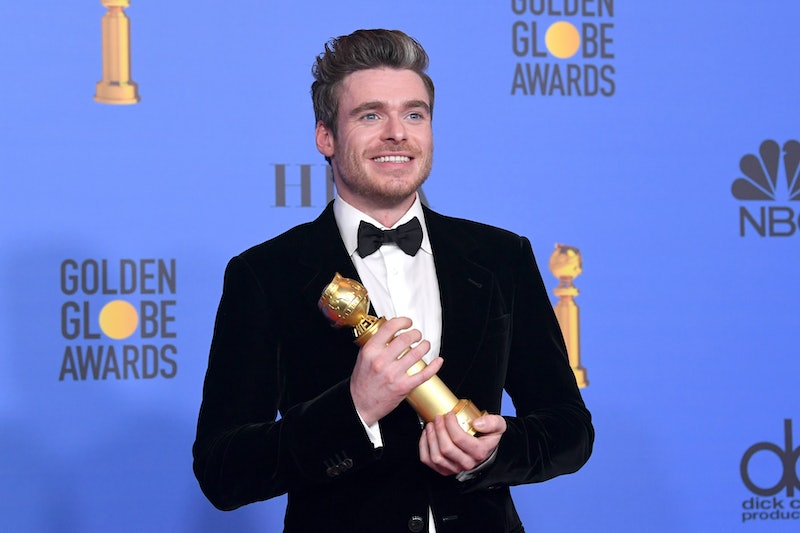 It feels like a lifetime ago since the BBC hit Bodyguard was on the small screen, but thanks for two nominations and a win at this years Golden Globes, whispers of an upcoming second season are beginning to make the rounds again. So much so that Richard Madden addressed the Bodyguard season two rumours during an interview, and the show's future looks pretty damn optimistic. I don't think I'm the only one that needs more David Budd in my life.

In an interview on the red carpet with Entertainment Tonight, Madden seemed very hopeful that there's some traction for a second season. "We're talking about it, we're going to see what happens over the coming year," the actor said. "I think the character needs a little break — I think he had quite a tough couple of months during the show so we'll see what happens." When asked whether there will be an extended pause between the first and (hopefully) second season, Madden replied, "We're gonna see. I think there's lots of conversations happening now so it's up to the brilliant mind of [showrunner] Jed Mercurio."

And if you thought the hope stopped there, think again as Madden's comments here pretty much reiterate what he told Ellen DeGeneres on The Ellen Show in December. After being asked whether he believed there would be a second season, he told DeGeneres: "We hope so. I mean, we've been talking about it a lot. It's kind of been quite mad this year, so we'll have next year to throw some ideas around and talk. So hopefully so."

IMHO, I think the Beeb and Mercurio would be silly not to continue the series, especially with the traction it's picked up for a second run with the Globe nominations, and of course Madden's inevitable win as Best Actor in a TV Drama. And even though the show itself didn't win its nomination, it doesn't diminish how the drama grabbed the attention of millions of viewers.

When asked what attracted him to Bodyguard in the first place, the actor told Entertainment Tonight that "the moral ambiguity of all the characters" was what captured his attention. "Everyone's in the grey zone, no one's definitively good or bad and that changes during the show," he continued. "Some people are good go bad, bad go good and I think that's what really made me interested in it because that gives us so much to play with."

While Madden seems certain that Bodyguard's legacy will continue, Mercurio is being a little more cryptic about what the future may bring. The showrunner told Radio Times back in November that he'd "absolutely" love to do another series of Bodyguard, but that becoming a reality will be down to two hurdles — Madden's availability and whether or not the BBC want the series to continue.

"Some shows do nosedive at the end, or some piece of content could become incredibly controversial and affect the way the show is seen," he told the magazine. "In the end, you have to accept that the broadcaster holds all the cards."

He continued: "[Madden's] the genuine article, a real leading man. And I think this role has put him very much in the spotlight for bigger things. So the practicality may be that we have to work around his availability, if we are lucky enough to get him back."

Somehow I don't think Mercurio has anything to worry about there. From the recent interviews with Madden, I think the actor wants a second series of Bodyguard as much as the fans do.