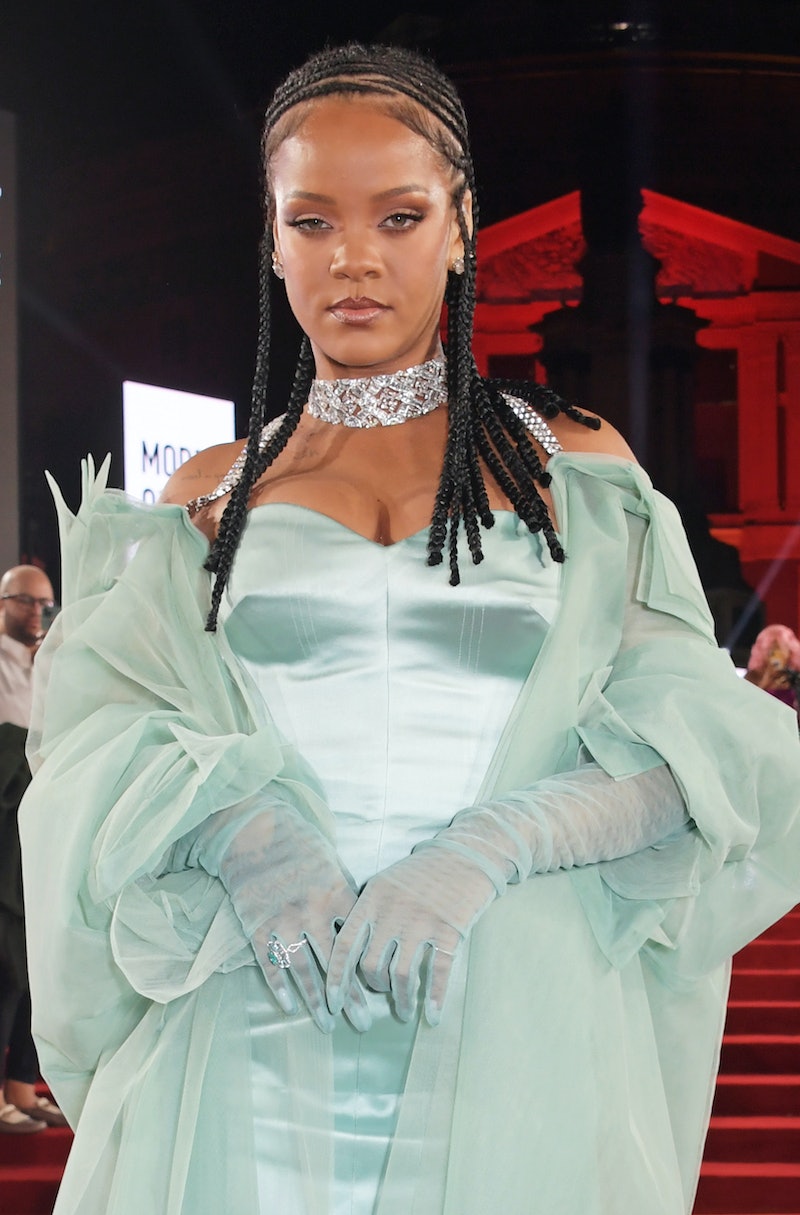 In a mixed-message for fans waiting her new album, Rihanna teased R9 with a hilarious meme, revealing that she's been keeping her new music to herself. On Sunday, Rihanna shared a short video of a fluffy dog dancing to House of Pain's "Jump Around" on Instagram, seeming to suggest the video was a teaser for her ninth studio album.

On Instagram, Rihanna joked in the caption, "update: me listening to R9 by myself and refusing to release it." The video, while hilarious, did not reveal any further details about the record or offer an upcoming release date. Back in December of 2018, a fan asked Rihanna when the album would drop on Instagram, and the star replied, "2019" according to Billboard. Then, in September, Rihanna signed an overall deal with Sony/ATV music publishing, according to Variety, but a new album still did not appear. Instead, Rihanna focused on her business ventures and acting, including an appearance in the 2019 film Guava Island.

The Navy, the name for Rihanna's dedicated fanbase, might be disappointed not to have a follow up to Anti, which was released in 2016. Yet, the singer's latest post at least suggests new music is in the works, and friends and fans of the star reacted to the funny post accordingly. SZA commented, "LOLLLL," while rapper Lil Nas X wrote, "lmffff." A few other commenters enjoyed Rihanna's teaser for the new album as well, with drag queen Vanessa Mateo writing, "SHADDDYYY!!! LOLOLOL omg I live" and singer BIA writing, "I'd like to see it" with a shrug emoji.

Back in October, Rihanna confirmed R9 would be "reggae-inspired" in an interview with Vogue. She added, "It’s not gonna be typical of what you know as reggae. But you’re going to feel the elements in all of the tracks." Unfortunately, the singer did not go as far as to reveal a release date, admitting the release was not yet completed.

Even though Rihanna hasn't revealed many details about her upcoming album beyond the genre, she did assure fans that music would continue to be a major part of her career, according to Vogue. "Music is, like, speaking in code to the world, where they get it," she said. "It’s the weird language that connects me to them. Me the designer, me the woman who creates makeup and lingerie, it all started with music."

Fans have reason to be skeptical about R9's release date, as in January, Rihanna posted a video in a music studio on Instagram, suggesting a new record would drop soon. Now, the year is almost at an end, and the singer has yet to release new songs. Her latest post, if nothing else, suggests the Navy might just have something to look forward to in 2020.