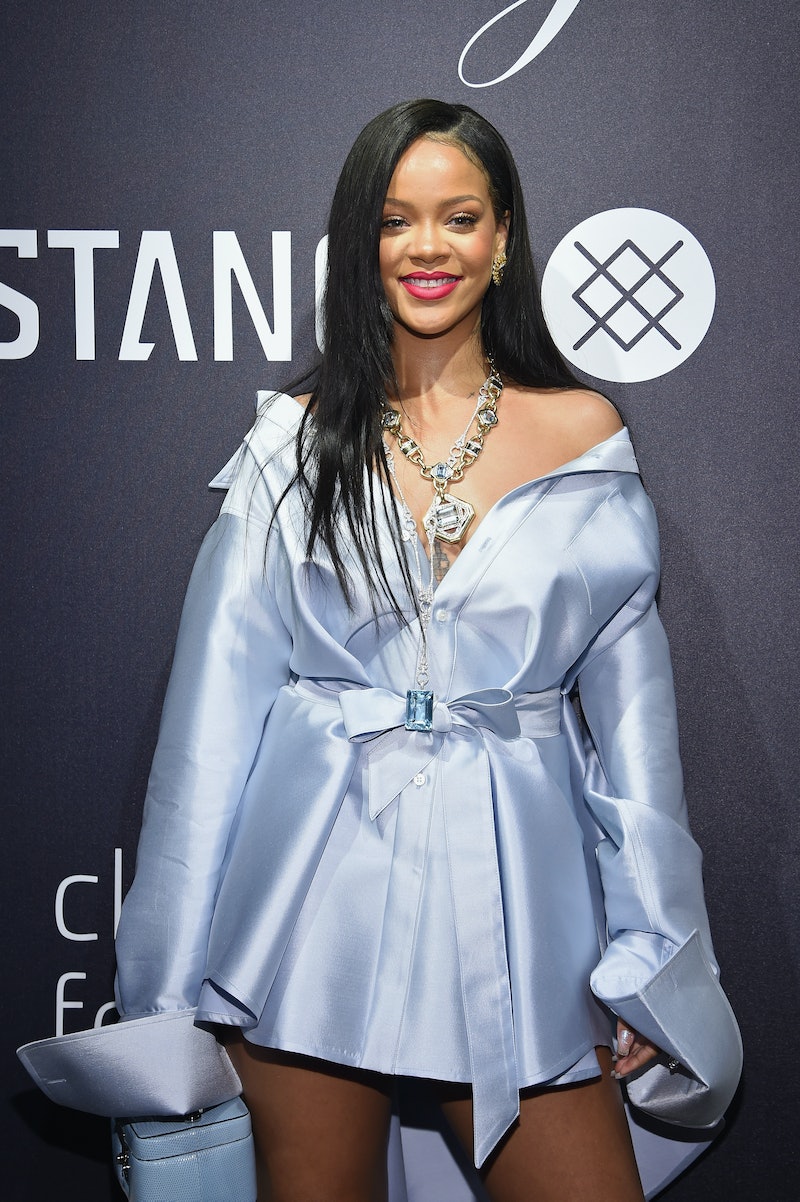 The ever-amazing Rihanna got to support one of her dearest friends in a big way recently. As Billboard noted, Rihanna was a bridesmaid in her best friend's wedding on Aug. 18. And thanks to the wonders of social media, the singer's fans can get a glimpse of the glamorous event through all of the fun snaps posted.

For the big event, Rihanna took a trip back to her own, native Barbados to celebrate the wedding of her friend, Sonita Alexander. The "Work" singer didn't just attend the affair, though. As multiple photos from the festivities show, she was actually one of her bestie's bridesmaids, donning the same gorgeous blue dress that the other bridesmaids wore.

In a clip posted to her Instagram Story (as fans screenshotted and shared via Twitter) over the weekend, Rihanna took her bridesmaid role seriously alongside her BFF. The singer donned a silky bathrobe with the word "Bridesmaid" written on the back, while Alexander posed in a bathrobe of her own, which had a stylish "Mrs. Walker" across the back. As one user on Twitter captioned the fun post, "So glad Rihanna made it to Sonita's wedding." It really is so nice to see the superstar come to support one of her oldest and dearest friends.

In another snap Rihanna posted to her Instagram Story, she and the bride got their selfie on in a simply adorable photo. The two posed together in their wedding best as the singer captioned the post with a simple kissing emoji.

Aside from all of the lovely photos that the "We Found Love" singer posted to her own account, there was also a very lighthearted moment from the wedding that one user captured, according to BuzzFeed. During the reception, there naturally came the moment when Alexander threw her bouquet into the crowd. As many wedding-goers know, the throwing of the bouquet can sometimes cause some pretty wild moments during any reception. And this time was no exception, thanks to a hilarious reaction from Rihanna herself.

As fan @fentyy posted on Twitter, when the time came for Alexander to throw her bouquet, Rihanna actually ducked instead of trying to catch the flower arrangement. And thankfully enough, the funny moment was actually captured on video. Just based on that reaction, I'd wager a guess that the singer really isn't trying to be the next to get married? Either way, fans could totally relate.

Seeing as though Alexander is one of Rihanna's "day one" BFFs, there's no way that she was going to miss her wedding. According to The Fader, the ladies have been friends since they were 11 years old, which is when they originally met in elementary school. As the singer even noted in a Facebook post in 2014, she and the new bride became fast friends when they were young. She also wrote in the birthday tribute to her bestie, "I respect you as a true woman and I cherish your honesty!!!!"

Rihanna and Alexander really are the definition of BFF goals, making it all the more special that their amazing friendship was on full display during the bride's special day.

More like this
Dixie D’Amelio & Noah Beck “Love Each Other” Despite Breakup Rumors
By Julia Emmanuele, Jordyn Tilchen and Grace Wehniainen
The 'Love Island' Wedding Mystery That No One Saw Coming
By Darshita Goyal
Confusion Reigns After Kanye Changes His Instagram Profile Pic To Kris Jenner
By Jake Viswanath
The Try Guys Cheating Scandal, Explained
By Grace Wehniainen
Get Even More From Bustle — Sign Up For The Newsletter