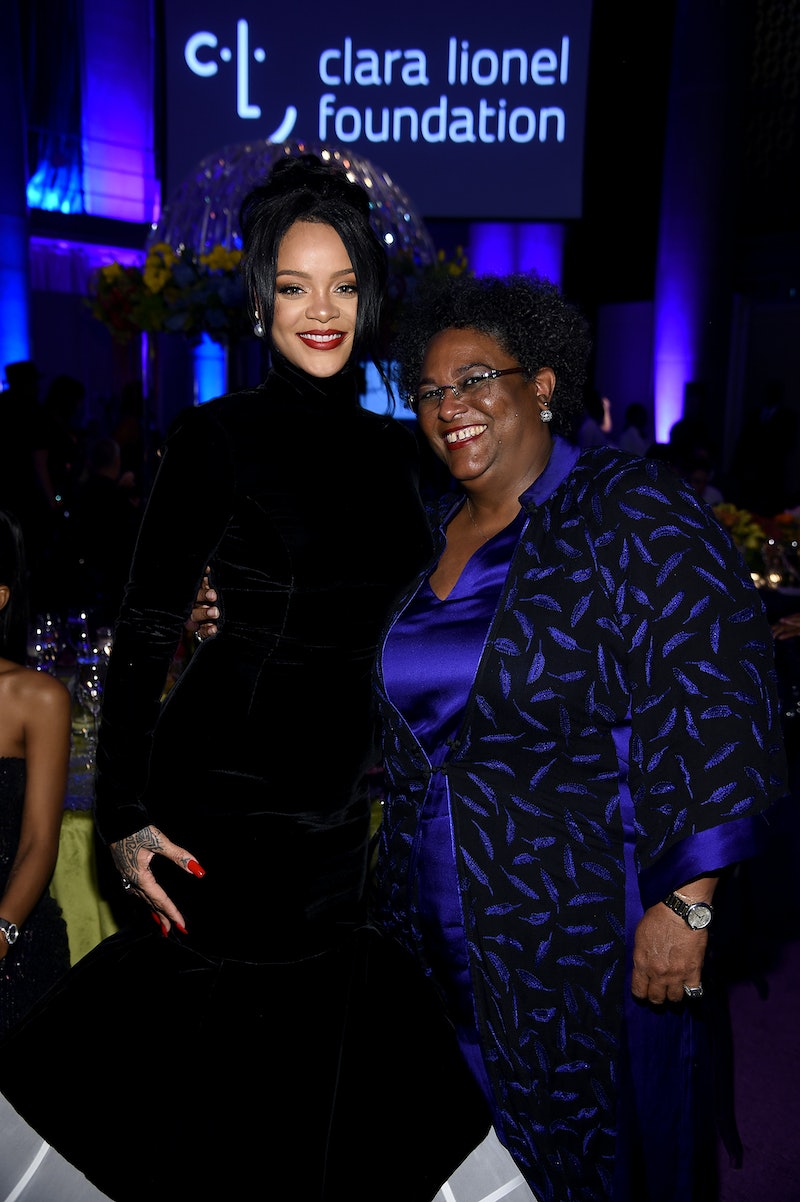 When Rihanna held her first Diamond Ball in 2014 to benefit the Clara Lionel Foundation — an organization that supports education and emergency response programs around the world — the idea was never to raise funds to fit the traditional nonprofit mold. The intent was always to flip the script. "Our work is really in a space of innovation," Justine Lucas, executive director of the CLF, tells me. "We're really trying to shake up some of the challenges out there."

Many nonprofits focus on reacting to issues a demographic faces solely in the moment of crisis — inevitably creating a cycle of dependency. But the CLF works to help those living in Malawi, Barbados, Senegal, and other areas across the globe find solutions to natural disasters and access to education that are sustainable, for the long haul. "I just feel like the way that the nonprofit structure is set up is continuing colonial dichotomies," Lucas says. "All the work must be based in the needs and thoughts of our local communities."

This is why the CLF launched the climate resilience fund earlier this year, which focuses on the fact that the era of climate change is here, and the time to act is now. "Rather than just reacting to natural disasters, we're figuring out how we help support communities who are already resilient, just be more resilient," Lucas explains. And the team is starting off by focusing on the needs of women.

According to the CDC, climate-related disasters can increase stress, physical work, and caregiving duties of women of reproductive age. These factors can result in this cohort facing increased potential miscarriages, or becoming exposed to other pregnancy complications. To respond to this gap in care, the CLF is partnering with the International Planned Parenthood Federation and Engineers Without Borders to strengthen existing medical clinics in the Caribbean — an area that will most likely suffer from increased natural disasters in the future — while also expanding access to better healthcare for women and girls when extreme weather hits these areas.

On top of widening access to care, all three organizations will source local labor and supplies to expand each island's medical infrastructure, ensuring there is little dependency on other countries. "Our big goal is the Caribbean becomes a climate resilient zone that [becomes] model for the rest of the world," Lucas states.

When it comes to education, the CLF maintains the same mindset. "We generally don't build schools," Lucas explains. "It's usually about supporting what's already there." That said, similar to the protocol when it comes to climate resiliency, the team does not have one homogeneous plan.

In Malawi, for example, Lucas tells me that since secondary school is not free, many families facing financial hardship will only send boys to school, while girls are essentially forced to stay home. To respond to this issue, the organization created the Clara Lionel Foundation Global Scholarship Program in 2016 to help these girls gain an education. But being given the chance to go to school is only one piece of the puzzle.

"We've realized that girls have the challenge of walking long distances to school," Lucas explains. In response, the foundation partnered with bike-share company ofo to provide bikes for the girls, so they can worry less about their commute, and more about learning. "That program was super community-led in the way that they leveraged the bikes," she continues. "They're housed at the schools, and they're shared amongst many students."

The team also wanted to ensure that the program would continue to sustain the community for generations to come, which is why they developed bike repair training sessions for the women. "It was really powerful to sit in the room for the bike workshop," Lucas exclaims, adding that none of the women who attended knew how to repair a bike on the first day. But now, "Some of the women have started their own businesses doing bicycle repair," she says.

Disrupting the status quo and creating new, more thoughtful, and genuinely inclusive standards is clearly what Rihanna and her teams do best. But we wouldn't expect anything different from the woman who single-handedly revolutionized the beauty industry with the launch of Fenty Beauty in 2017. Then just a year later, she put together the Savage x Fenty New York Fashion Week runway show, showcasing that women can be sexy regardless of height, size, race, or even if they're about to give birth. So it comes as no surprise that much like her other initiatives, Rihanna is also very hands-on when it comes to her charitable endeavors.

"It's a huge priority for her," Lucas confirms. "She's involved in all of our grant making decisions, she's setting the pace in terms of the vision and the innovation of the work." And despite all of their extraordinary work, the superstar — along with her entire team — isn't looking for a pat on the back for being of service to others. "We operate under the radar for the most part," Lucas says. But that doesn't mean that their work is any less impactful. "As of this year, we've given out over $13 million," she continues. "For the climate resiliency work, we're working to raise $25 million for that alone."

The annual Diamond Ball is a major way the organization drives funds, and this year, it raised over $5 million. "It's definitely a lucrative endeavor," Lucas says. "It's a really wonderful, fun evening."

In true Rihanna style, while the yearly event is certainly always star-studded, the superstar still manages to put her own twist on protocol for the evening. "In other galas, it is a lot about the selfies and influencers, and all of that," Lucas says. "But once you get inside, even influencers' cell phones are locked up. It's really powerful to look out and hear everyone engaging with the work. It's all about engagement and learning about CLF."

But for those who were unable to attend this year's ball, there are still several ways to help the foundation's initiatives. Supporters can make one-time or monthly donations through the organization's website, purchase the Diamond Ball-Out highlighter from Fenty Beauty, or shopping Savage x Fenty's limited-edition line. Also, in the wake of Hurricane Dorian, which has devastated the Bahamian islands of Abacos and Grand Bahama, the CLF has created emergency grants to help support communities in those areas.

Monetary donations aside, Lucas also encourages folks to follow the Clara Lionel Foundation's Instagram page to keep up with the organization's on-going advocacy work. "We try to give opportunities for meaningful social action, as well," Lucas says. "Sometimes we'll post, or Rihanna will post, opportunities to engage in direct advocacy towards world leaders, or corporations, pushing them to do more in the areas where we work."

The work the CLF has done, and will continue to do, should leave us all feeling inspired to be of service to others. But it should also genuinely influence us to do so in a sustainable way.