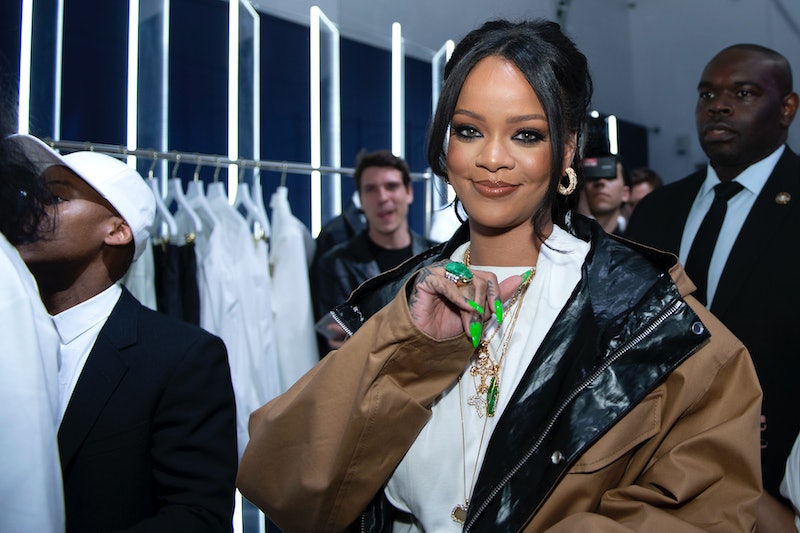 It’s safe to say that the trends of today are really just updated versions of the trends from the past. And if you don’t believe it, then take Rihanna’s ‘90s-inspired hair pins as a prime example. The look is so yesterday that it’s actually very much today’s style. Weird.

The Fenty empress stepped out on June 9 rocking her hair down with a light curl in long burgundy reddish brown hair with four crystal bobby pins tucked neatly into the sides of her middle part. The artist and makeup mogul posted two photos of the look on her personal Instagram the same day and already making its way across the internet amassing over 3.7 million likes between the two photos. However, Rihanna has a superpower of making literally anything look amazing, so if she’s wearing her hair like a ‘90s kid, then why not whip out the visible lip liner and frosted eye shadow, too.

RiRi didn’t stop serving ‘90s with her hair, but also donned two chokers, a pair of white tiny glasses, a fuzzy purple clutch, and she also wore chiffon over jeans and a white tee. Simple, retro, and iconic to say the least. The singer hasn’t credited a hair stylist in the photo she posted of her ‘90s grade school look, but should anyone be that shocked if she did it her dang self? It is Rihanna after all.

From head to toe, Rihanna's success at throwback fashion is another one for the books, but it's certainly not the first time she's used her hair clippings to channel trends from fashion's past.

In two of her Savage x Fenty drops, the singer has donned two different hair styles that pay homage to the '60s with a curly flip at the bottom.

To promote one of her monthly subscription boxes, Rihanna rocked a spike headband, and if that's not retro, what in the scene kid heavens is?

Rihanna served more '60s pinup when she was photographed for a Savage X campaign in a crystal hair clip, a tucked side bang, and long wavy curls.

In 2018, Rihanna tapped into her retro style once more with this powder blue eyeshadow, a literal hair flip, and a set of side bangs.

The 2017 Cannes Film Festival is where Rihanna opted for something a little more Audrey Hepburn with this super sick updo that paired amazingly with the makeup mogul's dress along with her unforgettable tiny shades.

One of Rihanna's most jaw-dropping looks (which people talk about to this day) is her 2015 Met Gala red carpet look. Besides the obviously show-stopping yellow and gold Guo Pei dress, Rihanna's hair also stole the show in its short flared out cut. Clearly, auburn hair is a fave of Rihanna's since this proves she's been here for the hair dye for the last four years.

It didn't take the launch of Rihanna's Fenty fashion house to prove that the songstress, businesswoman, and overall badass knows her style. In Rihanna's world, she can rock a sick hair look or an outrageous outfit, no matter what time period it came from.

More like this
Harry Styles’ Red Carpet Looks Have One Thing In Common
By El Hunt
15% Pledge Director LaToya Williams-Belfort On The Impact Of Supporting Black Business
By Dominique Norman
Tilda Swinton’s Neon Yellow Hair Is More Than A Style Statement
By Justine Knight
How To Wear A Bucket Hat Like Rihanna, Dua Lipa, & More
By Allie Fasanella
Get Even More From Bustle — Sign Up For The Newsletter