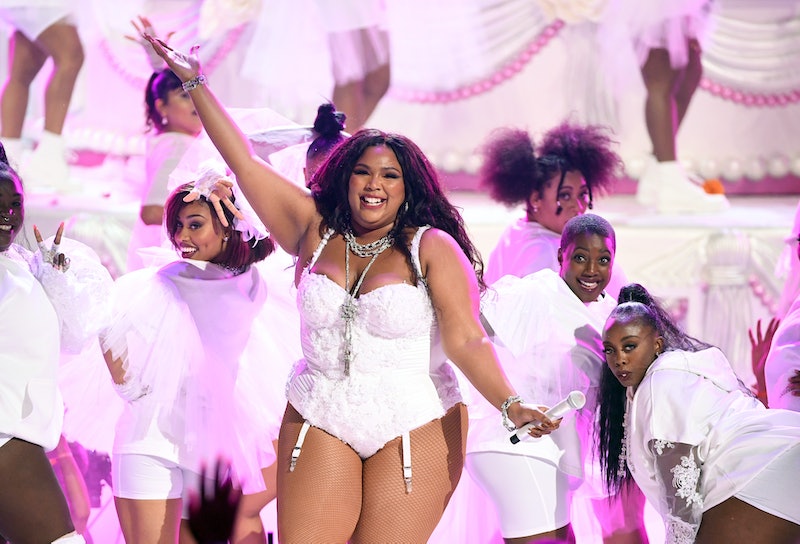 Lizzo is feeling good as hell today. The rapidly rising star made her BET Awards debut on Sunday, June 23, performing her breakout single "Truth Hurts," dressed as one of the hottest brides ever, and completely dominating the stage. As you can guess, she certainly made an impression on viewers, but perhaps no one loved it more than Rihanna, who gave her a standing ovation before she was even done. In fact, Rihanna’s reaction to Lizzo’s BET Awards performance was so instantly iconic, it set Twitter on fire, making everyone want the same love in their life that Bad Gal Riri has for the singer (and her flute, Sasha).

Lizzo made her entrance on the BET stage standing atop a large wedding cake, with a posse of turnt-up bridesmaids beneath her, and performed in a full-on wedding dress, completely with a dramatic veil and twerking tassels on her behind — what more could you want? After she brought out Sasha and delivered a knockout flute solo, Rihanna immediately rose to her feet, giving her a round of applause and jamming to the song in approval. The camera caught her clapping once again when the performance was finished, this time with an affirming point to the singer, as if she was saying, "you're 100% that b*itch." Lizzo knew that already, but Rihanna's affirmation is always a blessing.

Naturally, Twitter totally loved that the superstar had the same reaction as they did to Lizzo’s show-stopping number, making it one of the show’s highlights. In fact, most Twitter users agreed that Riri's reaction was a total mood.

Other users pined for someone in their life to love them the same way that Riri loves Lizzo. Honestly, same.

Lizzo responded to the online hysteria via both Twitter and Instagram, because one social media network was not enough to contain her excitement. She posted a clip of the moment on Instagram, simply captioning it “RIHANNAAAAAAAAAAAAAA” — a perfectly natural reaction to the queen. She even got in on the meme action herself on Twitter, where she posted a screenshot of Rihanna pointing right next to a picture of her on stage. “That’s it... that’s the tweet,” she wrote, and really, that’s all fans needed.

However, even though Lizzo alone is worth the trip, she's not why Rihanna made an appearance at the BET Awards. The superstar was there to present R&B and hip-hop icon Mary J. Blige with the BET Lifetime Achievement Award. She gave one of the more touching dedications of the night, delivering a speech on the singer's influence on music and historic allocades — including her title as the first person ever to nominated for an Oscar in an acting and music category in the same year.

"Happy Mary. Sad Mary. Mad Mary. No more drama Mary. Dancing Mary. We’re here for all of it," she said while presenting the award. “Mary J. Blige, you have set the bar for relatable, timeless, classic music," Rihanna said. "You opened multiple doors for female artists in this industry. On behalf of all the women who came after you like myself, thank you for being you so we can be comfortable being ourselves.”

As she accepted the trophy, Blige sent the same love back to Riri, telling her, "I don’t think you know how much I love and respect you. I’m a huge fan and you inspire me right back.” Female icons supporting and celebrating each other, whether it's by jamming out to a killer performance or paying tribute in a speech — that's the ultimate mood.