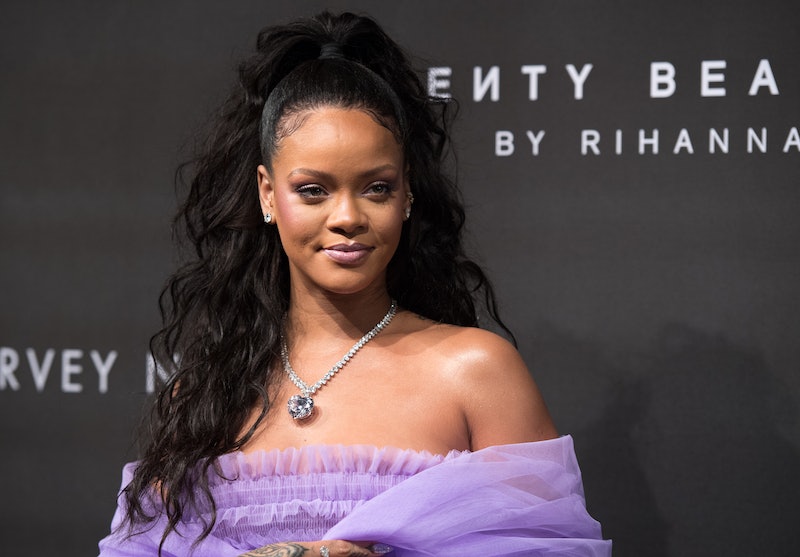 It's been a big year for Fenty Beauty. In just a few short months, the brand had an incredibly successful launch and rolled out a Holiday Collection as well. But this time, people are talking about their campaigns that haven't even happened yet. A Twitter user asked Rihanna about casting transgender women in Fenty Beauty ads, and her response has the entire internet divided.

Bustle has reached out to Fenty Beauty for comment.

It didn't take long for Rihanna's Fenty Beauty to earn the title of most inclusive brand. In fact, on its very first launch the brand released a whopping 40 shade of foundation — a product that landed on Time's Top 25 Inventions of 2017 list. With even more collections in the works, fans have taken to social media to give their input. Some of them even get personal messages back from Rihanna.

According to screen shots, Twitter user @lbertootero reached out to Rihanna to praise her campaign and to urge her to include more transgender women during her upcoming launches. Rihanna personally messaged the fan back, but her response might surprise you.

"I've had the pleasure of working with many gifted trans women throughout the years, but I don't go around doing trans castings!" she wrote, according to Twitter user @lbertootero.

"Just like I don't do straight non trans women castings! I respect all women, and whether they're trans or not is none of my business! I don't think it's fair that a trans woman, or man, be used as a convenient marketing tool! Too often I see companies doing this to trans and black women alike! There's always just that one spot in the campaign for the token 'we look mad diverse' girl/guy! It's sad!"

Bustle has reached out to Fenty Beauty for comment.

The tweeted screenshot of the conversation has over 800 retweets and nearly 1.8 thousand likes on Twitter. Despite so much love for the response, the tweet has essentially divided Fenty Beauty fans.

On one hand, people are championing Rihanna for not exclusively calling out trans women. On the other, fans are saying that calling for an exclusive trans women casting would make Fenty beauty even more inclusive. People have great points for both arguments, but ultimately it's up to Rihanna to decide.

Fenty Beauty has made it a point since they launched to have makeup for everyone. That has also included casting a wide variety of women in the campaigns as well. Rihanna doesn't try too hard to include everyone, she just does. That's what sets Fenty beauty apart from all other brands.

Regardless of their past castings, people are still on both sides when it comes to her comment. Here's what fans have to say about the direct message, so you can decide for yourself.

Because honestly, it's none of her business. She's not trying to use trans women as pawns. She's getting badass women to rock her campaign.

Others don't see it as tokenism at all, but a push to actively include more trans women into the beauty world.

Why are people bringing this up with Fenty Beauty, but not asking other brands to do the same?

That is precisely the point. Just because no one walks around screaming, "Rihanna used a trans woman in her ad" doesn't mean that there aren't trans women on set.

People are pushing for the use of trans women models in the name of beauty inclusivity, but why does that just have to be limited to "new" companies?

At the end of the day, it's Rihanna's call on what she doesn't with her business. The real question is why people aren't bringing this question up with any other makeup brands.