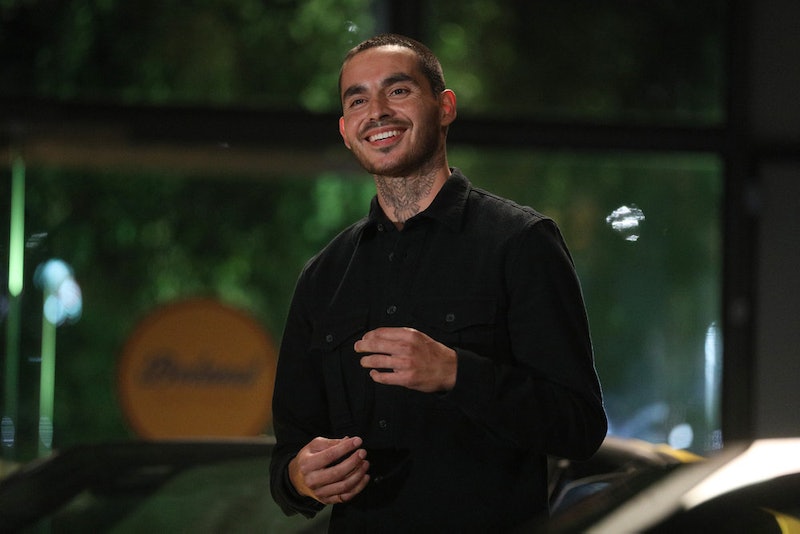 Spoilers ahead for the Season 3 Good Girls premiere. "He's gone. We're free," Beth says in the trailer for Good Girls Season 3. She means that Rio is gone, mistakenly believing that the gunshots she dealt him at the end of Season 2 were enough to kill him. But Rio is alive and he is not playing around.

Beth, Ruby, and Annie don't know yet that Rio survived that fateful shooting. He was kept alive by FBI Agent Turner who helped Rio recover and housed him at a swanky hotel in exchange for information that could lead to a crime bust. But Rio played Turner, and when Turner and his guys showed up to do the bust, the warehouse was empty. Instead, they were ambushed, and shot dead. Including Turner.

What's next for Rio? He told the hotel concierge that he was in the area for "business," and that probably spells bad news for Beth (since she shot him) as well as Annie and Ruby — especially since they've all gotten back into the counterfeit money game. Only this time, they think they're free to run it themselves without being at Rio's beck and call. Whoops.

"We go into Season 3 with the sense of relief because Rio's now out of the picture," Christina Hendricks, who plays Beth, said in a Good Girls featurette video provided to TV Insider. "They can start fresh and instead of going back to their normal lives, they decide to create their own crime empire." Retta, who plays Ruby, added, "This season, no more workin' for the man. This year, b*tches are doin' it for themselves."

The actresses were good at keeping a secret because it's very clear from the ending of the premiere and the trailer for the season that Rio is very much around, even if they are trying to break out on their own. There's a moment in the Season 3 trailer where Beth opens the door and looks shook by who is on the other side. It's likely to be Rio. He probably couldn't stay away long — especially once he finds out that Beth befriended his son's mother in his absence. The Feb. 23 episode synopsis says that "Beth makes a choice that surprises those around her just as an old foe from the past returns." Hmm... wonder who that foe may be.

In an interview with TellTaleTV, show creator Jenna Bans hinted that Beth and Rio's interactions were far from over. "It's not the end of the road for them," she said. "I think there's a long road ahead of them that will be filled with a lot of difficulties and also a lot of fun moments."

That first time meeting back up probably won't fall into the "fun moment" category, though. Rio's already proven he's willing to make big moves in the name of revenge, so Beth probably isn't as "free" as she may think.

More like this
Netflix Shut Down 'Bridgerton' S3 Rumours About A “Very Dark” Storyline
By Bustle
Shonda Rhimes Responded To The Surprise Exit Of A Day 1 'Grey's Anatomy' Figure
By Grace Wehniainen
'Succession' Season 4 Will Be An "Absolute Banger" According To Cousin Greg
By Bustle Staff
Taylor Swift Visited The 'Glee' Set For This Bizarre Season 5 Episode
By Grace Wehniainen
Get Even More From Bustle — Sign Up For The Newsletter
From hair trends to relationship advice, our daily newsletter has everything you need to sound like a person who’s on TikTok, even if you aren’t.