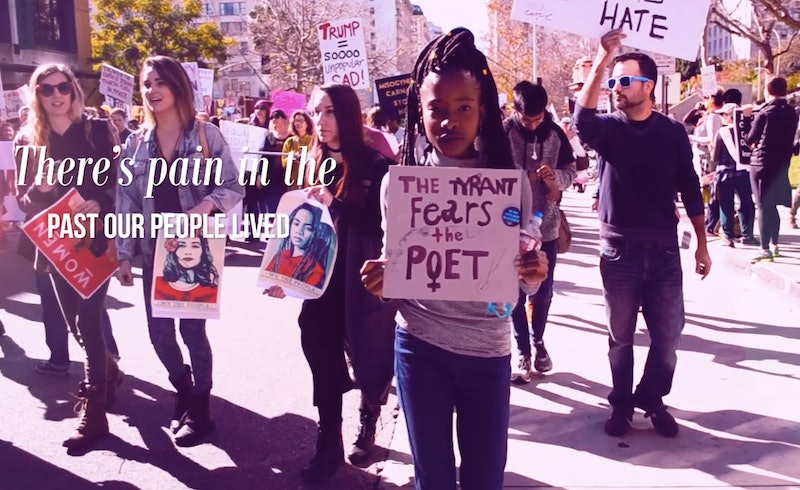 In just a few days, many people will be heading to the second annual Women’s March on the one-year anniversary of last year's. Though the first year under the Trump administration has been tumultuous and downright scary at times for marginalized communities, the first Women’s March motivated millions of people to join the fight for equality. Many people — especially teens and young adults — have risen up to the challenge of making the world safer and more equitable for future generations. Activist teens and twin sisters Amanda and Gabrielle Gorman are helping lead the movement, inspiring other people to get involved in activism through their art, with a new video called "Rise Up As One." The Gorman sisters released the moving short film on Jan. 18, and it'll reignite your passion for activism in the new year — just in time for the upcoming march. In an exclusive interview with Bustle, Amanda and Gabrielle talk about all things activism, on how social justice issues are all connected, and about their goals to one day work in the White House.

Both young women, who are originally from Los Angeles, utilize art in their advocacy but have unique creative talents. The video, directed and edited by Gabrielle, features a poem, also entitled “Rise Up As One,” written and performed by her sister. Amanda explains she wrote the poem after being inspired by the California-based community #RiseUpAsOne, and wanted to help mend the divides in her home state. “In this political climate, it’s far too easy to become divided and polarized. I wanted to be part of something, especially dedicated to my home state of California, that spoke about what unites us,” says Amanda. “What binds us together that is strong enough to make us rise up, to speak up? Questions like that always drive my poetry.”

Gabrielle tells Bustle she felt moved to create the “Rise Up As One” video because she felt older generations were discounting the contributions teens and young adults have made to activism.

“Sure, [my generation] addicted to our phones and social media. But let me tell you something — we’re also the first people to roast our homophobic grandpas and racist aunts at Christmas dinner,” says Gabrielle. “I wanted to show in this short film is that the power lies in us, a power that can only be fully realized when we rise up as one.”

Amanda, who is currently a sophomore at Harvard University, was recently honored as the first Youth Poet Laureate to ever be named in the United States. The film begins with a scene of her sitting on a bus, as she begins to recite her poem also entitled “Rise Up As One.” The video features a montage of different marches, protests, and rallies, as well as a diverse group of young advocates — from women of color to queer teens. The video concludes with Amanda recite the last poignant lines of her poem, saying, “You get a wave when one person rises up like a sun, but you get a movement when the brave rise up as one.”

At its core, the “Rise Up As One” film and poem are both a testament to the importance of intersectionality in social justice movements. “I think the takeaway from this piece is that there is so much power in unity, and by that I mean embracing our differences while appreciating our sameness. I also want to implore people to seek out allyship. There are so many beautiful movements happening right now but in each movement you will still find patterns of alienation or underrepresentation,” explains Gabrielle. “I feel it’s prudent to understand that to fight for one group of people is essentially to fight for all people. You can’t be against racism but anti-trans, just like you can’t be feminist and anti-black — they’re practically oxymorons! All communities are interwoven and affect each other, either directly or indirectly.”

Similarly, Amanda emphasizes the short film and accompanying poem are all about bringing together people from a diverse array of backgrounds, experiences, and cultures. “I think it’s important to recognize that it isn’t necessary to erase our differences to be united. That is why this poem calls out to so many different demographics without losing a common ground,” she says.

Though these sisters are only 19 years old, they don’t plan to ease up on their momentum any time soon. “My goal as a poet and activist is always to use my art to join in a wave of progress,” explains Amanda. “How can I learn from the past freedom fighters, and how can I improve on the bedrock they made?” Though she explains it is difficult to collaborate with Gabrielle since they are currently living on opposite coasts, she says the sisters plan to release more projects together, and adds that she hopes she “gets to work together in the White House some day” with her sister. As a filmmaker, Gabrielle hopes to continue to bring visibility to marginalized communities, motivate young people to pursue activism, and enact change. “I want young people to understand that being an activist goes beyond a Facebook post, or a hashtag on Twitter," she says. "Being a true activist is about using your passion to advocate for positive social innovation. It’s about understanding intersectionality and the multiple levels of privilege and disadvantage,” she says. “Most importantly, it’s understanding that there is always more to be learned. To be an activist is to be in a constant state of learning.”

In the past year, many activists — old, young, new, and experienced — have begun to realize the way to affect the most change is through intersectionality, and ensuring everyone is given a voice. In the revolution, inclusivity is not an option: Through poetry and the “Rise Up As One” film, the Gorman sisters will continue to remind you just that.

Editor's note: The headline of this story has been updated from its earlier version.

More like this
Amanda Gorman Shared A Powerful Message On Meghan Markle’s Penultimate Podcast
By Darshita Goyal
Iran Has Issued A Death Sentence Over Mahsa Amini Protests
By Catharina Cheung, Darshita Goyal and Maxine Harrison
10 Thanksgiving Alternatives You Can Celebrate This Month
By Katie Mitchell
Wimbledon Alters All-White Kit Rule Amid Candid Period Discussions
By Catharina Cheung and Rachel Mantock
Get Even More From Bustle — Sign Up For The Newsletter