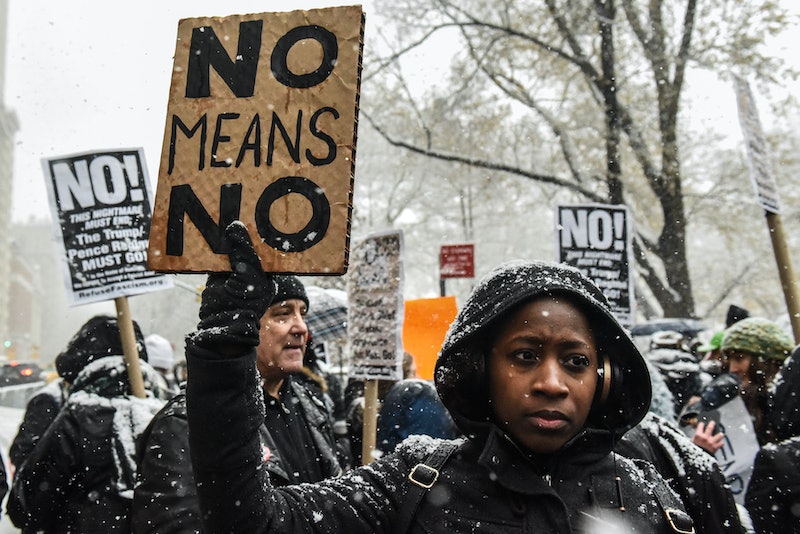 If you're a woman, there is a pretty good chance you remember the first time you were sexually harassed. There is also a pretty good chance that when it happened, you weren't even a woman yet, but rather, a young girl. From an early age, women are confronted with the harsh realities of living in a sexist and misogynistic world that treats their bodies like property, or worse, commodities. It's a traumatic experience, one far too many young girls can relate to, and one that a dark and oddly funny short story from Rita Bullwinkel's new collection Belly Up captures perfectly.

"Arms Overhead," one of the 18 stories in Bullwinkel's powerful debut, follows best friends Ainsley and Mary, two precocious young women who enjoy reading out loud to one another more than the company of most people. When they aren't devouring a stack of their most recent library acquisitions, Ainsley and Mary have frank and mature discussions about everything from the science of the self-cannibalistic ouroboros plant to the literary history of Daphne and Apollo. The girls also use their conversations to wade into the murky waters of sexism, misogyny, womanhood, and other complex subjects all young women must grapple with at some point.

As Bullwinkel describes in the story:

"They thought themselves as many things, but mostly as humans who other people seemed to identify as young women, which appeared to come with a great many problems, most of which they knew, but some of which they were still in the process of discovering."

One of the problems Ainsley and Mary discover in the narrative is sexual harassment. In the first of two encounters, the girls are reading at the local park when a group of teenage boys drive by and catcall them. Although the boys don't physically harm them, the girls still understand their experience as the microaggression it is. As Ainsley describes it, "'[...] the car-boy way of looking at someone is violent, or at least implies violence.'"

Despite their age at the time of the incident, which takes place the summer before their freshman year in high school, both Ainsley and Mary are already well-aware of the misogynistic behavior of the boys and men around them. They may be young, but as women, they can already recognize the comments from the boys in the car as harassment because they have to, and because they have likely seen it on multiple other occasions. Even before they are legally adults, young girls like Mary and Ainsley are bombarded with the realities of womanhood that include catcalling, ogling, harassment, and the male gaze. What is different is how they choose to process it.

Belly Up by Rita Bullwinkel, $14, Amazon

In the second instance of sexual harassment, Mary is sent to the principal for wearing clothes her Spanish teacher deems a distraction, or as she puts it, "not appropriate for a learning environment." While waiting outside the office for a punishment she knows is unjustly coming, Mary replays the incident in her mind:

She saw herself standing in front of the Spanish class, arms overhead, the flesh of her belly exposed. She could feel Senora MacDonald’s finger, her pointy painted nail touching the skin right above her hip bone, and the whole class’ stare toward that finger, as if Senora MacDonald might actually push her finger into Mary and skewer her, and then raise her up into the air impaled for all to see.

So many young girls attend schools with sexist dress codes that unduly put pressure on women to present themselves in a way that discourages their male classmates from acting out. In other words, Mary is just like every other woman who has ever been made responsible for bad male behavior.

When she does sit down with the principal, Mr. Flavin, Mary is forced to experience further sexist humiliation when he explains that very fact to her:

Like so many other women who have been humiliated and traumatized by sexual harassment and a systemized misogyny, Mary is enraged by her experience. When discussing it with Ainsley, she expresses anger towards the principal for his overt sexism, towards her female Spanish teacher who she sees as under his control, and towards her entire community. "A sticky film certainly connects everything," Ainsley says afterwards. "Especially in this situation, in which, I fear, that everyone who lives within a thirty-five mile radius of our school is implied.'"

After coming to terms with the fact that the harassment they face isn't the fault of one person, but an entire community and culture, the girls come to a conclusion so many other women have: “We have to consume so we’re not consumed,” Mary tells Ainsley, only unlike so many other women, they don't mean it metaphorically. Before the end of the story, they begin plotting the perfect symbolic murder and act of cannibalism, one that will send a message to the principal, the Spanish teacher, and the boys in the car.

Like the other stories in Belly Up, "Arms Overhead" is twisty and complex, appearing to be one things on the surface — a story about girlhood friendship — but eventually revealing itself to be something else entirely — a cautionary tale about sexual harassment and revenge. Though it isn't a straightforward horror story, it does capture the terror so many modern women feel every day.

And, for any woman struggling under the weight of America's systematic sexism and institutionalized misogyny, "Arms Overhead" has some advice many in the #MeToo and Time's Up movements already seem to be following:

“Be patient,” Ainsley tells Mary. “We’ll eat them. We just need to figure out the best way how."