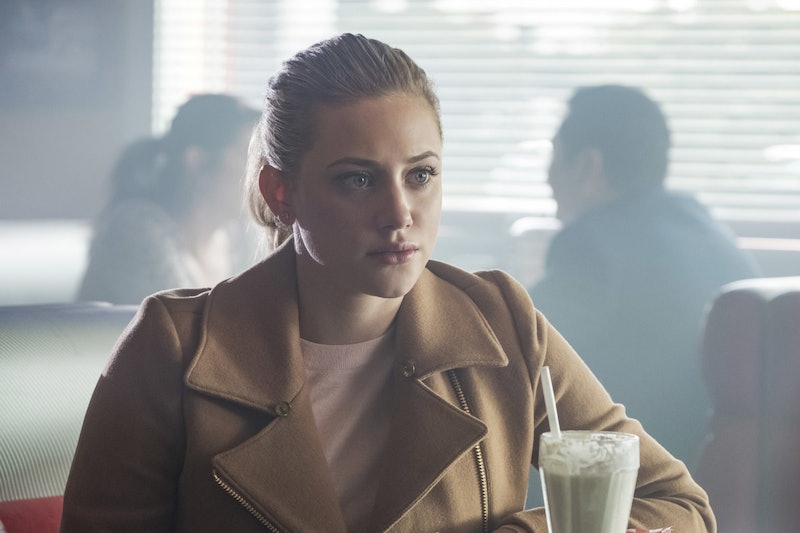 Riverdale is a small town, and only so many of its campy inhabitants could possibly be the Black Hood killer. However, fans should wager on being surprised no matter what. Even if you're super committed to your fan theory, the identity of the Black Hood on Riverdale will probably pack a punch and include a few surprises.

The most popular fan theories point to Betty's father and Betty's brother. Who else would know that much about the youngest Cooper? Who else would she see herself in at the end of the day? Recently, Twitter user Chloe1D raised the pitch on the Black Hood's phone calls — and the voice sounds a lot like Hiram Lodge. Is he really pulling that many strings and causing that much chaos on town? Pretty much all of the parents are suspects in this messed-up town, especially after Jason Blossom was shot in the head by his own father. Some fans even suspect that Cliff Blossom has risen from the dead and is pulling a villainous double duty as this new killer. With the spooky Sabrina spin-off coming to Netflix soon, the supernatural is certainly possible.

Here are some old and new contenders that would definitely shake up any fan's suspicions. The Black Hood is closing in on our heroes on Riverdale, and hopefully our heroes can figure out who he is before it's too late.

That was Veronica and Betty's theory and a popular fan theory as well. His affair with Mayor McCoy may have quelled their fears — but what if the two of them are working together? What if it's a double red herring? He should definitely stay on the list.

Jughead recently learned about a murder that went down in Riverdale a while back that, for some reason, seems like it could be connected to or inspiring the Black Hood killer. If this is the same person, then who the heck is it, why are they back in town, and how are they connected to Betty Cooper?

The Guy Who Told Jughead About The Riverdale Reaper

We thinks Farmer McGinty, the hunter from Greendale, may prophesize too much. What if he was deliberately trying to push Jughead off the scent? Reddit user Locke108 looked into the character in Archie comics. They found out that a cop named McGinty mentored the Black Hood, whose name in the comics is Matthew Burland. Curious!

Why is he always around, other than the fact that it's, you know, his job? Sometimes, when a character is accompanied by horror movie music, you have to trust that it's for a reason. Plus, there's his shocking connection to the Riverdale Reaper.

This is at least one Twitter user's theory. They seem to be a similar build. It would certainly be out of left field, but what if the killer is just a member of the Serpents who went crazy? He could be inspired by or connected to any number of scandals in town, so it's not that wild of a theory.

Could the scorned butler be the culprit? You never know. Maybe Hiram is working with him, and sent him away on purpose.

Doiley himself might be physically too small to inhabit the mask — but what about one of his relatives? Seventeen is convinced Dilton himself is the killer, but something (his eyebrows) just doesn't feel right.

A Group Of People

What if the Black Hood is an organization, not a single entity? That would involve many of the women in Betty's Riverdale life — the stature and face of the Black Hood killer does appear to be masculine.

There are so many possibilities for success and failure when it comes to solving this mystery. Hopefully the Black Hood will be revealed soon, because the suspense is killer!

More like this
Everything To Know About 'Evil' Season 4
By Meguire Hennes
‘Squid Game’ Creator Hwang Dong-Hyuk Just Dropped A Major Season 2 Tease
By Brian Anthony Hernandez and Bustle Editors
Does 'Locke & Key’s Ending Mean There Could Be A Season 4?
By Sophia Moore
'The Simpsons' Will *Finally* Address How They “Predict The Future”
By Sam Ramsden
Get Even More From Bustle — Sign Up For The Newsletter