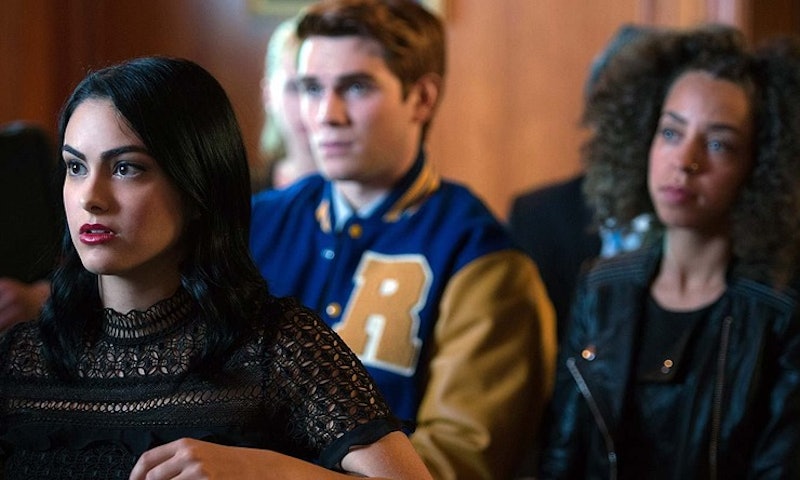 On the surface, Riverdale seems like one of the most diverse teen dramas on primetime right now, but you'd never know that from watching it. Eight episodes into the season, Riverdale has a representation problem that's even bigger than not having any POC at all: the show marginalizes and ignores the POC in the cast to the point where they may as well not be there.

The sheer amount of characters of color at the writers' disposal makes this issue even harder to swallow. Reggie Mantle and Dilton Doiley are played by Asian actors Ross Butler and Major Curda. Josie McCoy and her Pussycats, Melody Valentine, and Valerie Brown, are played by black actresses Ashleigh Murray, Asha Bromfield, and Hayley Law. Veronica Lodge, and her mother Hermione Lodge, are, of course, played by Brazilian actress Camila Mendes and half-Mexican actress Marisol Nichols. And — even though his character doesn't appear to share his ancestry since both his parents are played by white actors — Archie Andrews is portrayed by KJ Apa, who is half-Samoan.

But all of that diversity means absolutely nothing if the characters are being marginalized, given problematic storylines, or outright ignored. And as of Episode 8, "The Outsiders," Riverdale has done all of that.

Nowhere is the marginalization better shown than in the case of Valerie Brown. Valerie has appeared in every episode of Riverdale so far, and yet we know nothing about her. One episode focused on Josie and the Pussycats, as well as Valerie's friendship with Josie coming into conflict with Valerie's feelings for Archie, and still, nothing. Then Valerie started dating Archie — arguably the show's main character — and nothing changed. She has a brother, Trev, who went on one date with Betty, but we don't know where they live, anything about their parents, what Val's interests are outside of music, and if she even has any friends aside from Josie and Melody.

You would think the fact that she'd dated a main character would place more focus on Valerie, maybe give her some sort of development arc, but Val only appears briefly at Archie's side about twice in "The Outsiders," and only offers support for his and Betty's storylines. I'm going to go out on a limb and say that Val and Archie are no Betty and Jughead, and that their relationship won't lead to cute moments and clear development for both characters.

But even when characters of color do get a spotlight episode, the plot line can still be problematic. "Body Double," which introduces Chuck Clayton, is a perfect example of that. Chuck was the first black male character we got to know on the show, and, in the comics, he's a sensitive artist who basically defines wholesomeness. However, "Body Double" rebrands him as a predator who lied about sexual exploits to impress his friends and who slut shamed the women who protested into silence. When he does this to Veronica, she and Betty team up to tear down the patriarchy. However, the pro-feminist message of the episode took on an uncomfortable racial coding when Chuck is chained up in a hot tub by the white Betty and white-passing Veronica, the former of whom threatens to boil him alive while calling him "good boy."

The image of a chained up black man being called "boy" by a white woman in a position of racial power over him wasn't lost on black members of the audience. As Nerds of Color rightfully pointed out in their review of the episode,

I’m not sure how aware the writers were of what they were making Betty do, but putting a black male youth in chains (in order to punish him and taunt him sexually), having her, a white girl and therefore in racial power over Chuck, say “good boy” and then abusing him is not a good look either.

Between the extremes of the problematic storylines and the marginalization, the remaining characters just get dropped or ignored. Josie got one episode to shine, which dove into her issues with her father and relationship with her mother, deepening her passion for music and tight command of the Pussycats. Since then, she's largely been a background prop for whenever Veronica needs a plus one who isn't Betty or Archie. Her individual storylines have been completely dropped. Does anyone remember that Josie and Cheryl are such good friends that Josie would completely revise her opinion on teaching Archie music just because Cheryl asked her to? Yeah, neither does the show.

Dilton Doiley appeared for one episode as a prop in Jughead's investigation and hasn't been seen since. Melody hasn't had more than two lines, despite appearing every time the Pussycats do. Reggie, Val, and Trev receive so little focus that they may as well be extras. And Cheryl's friends, Tina Patel and Ginger Lopez, have been forgotten by both her and the writers. Do they even speak?

Meanwhile, Betty's already heavy family storylines pile up episode after episode. The same goes for Jughead, especially since he and Betty started dating, and Archie, who is white on the show regardless of his actor's ethnicity. That leaves the Lodges to fill the diversity gap with storylines and development. However, the amount of focus that Veronica receives, combined with the subtle nods to her ethnicity (like her mother calling her "mija"), doesn't change the fact that she is white-passing, or that Riverdale has so many characters of color that this gap shouldn't even exist.

Riverdale is meant to be an ensemble show. That's why it's called Riverdale, and not Archie like the comics that inspired it. But the show that V Magazine initially called the "most progressive show on primetime TV" is falling into the same trap that every other show without nearly so diverse a cast falls into: focusing only on the white characters.

We know the actors and the talent are there, because we can literally see them. We know the storylines can be written without detracting from the main plot, because we already wasted multiple episodes on Archie's sports-or-music arc going in the background of the parental abuse and murder mysteries. Hell, we already know that the Riverdale writers can craft compelling stories for characters of color, because they do it every episode with the Lodges.

And with five to six more episodes left in the season, and a second season on the way, there's no excuse for things to continue the way they have. We've seen the people of color in Riverdale. Now, can we please get to know them?

Editor's Note: The article originally stated that Camila Mendes is Hispanic. She is Brazilian.