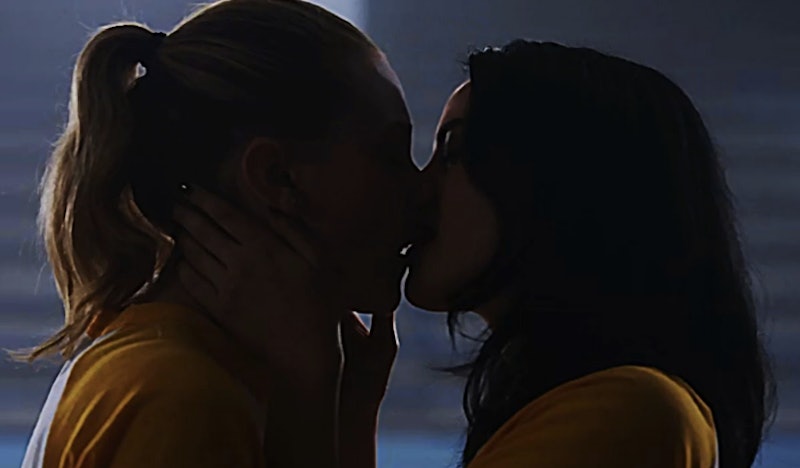 There is plenty about Riverdale, The CW's drama based on the Archie comics, that fans appreciate, but the show has come under fire for how it handles sexuality. The latest issue involves an early episode of the show in which two of the main characters, Veronica and Betty, shared a performative kiss. When Shannon Purser, who is most notable for her role as Barb on Stranger Things but plays Ethel Muggs on the show, commented about "angry Beronica stans" on Twitter, viewers were further offended. Fans reached out to Purser claiming that Riverdale used queer-baiting, and the star addressed the feedback with a message that shows she's willing to learn and understand more about the phenomenon.

Queer-baiting is complex, and is something that some Riverdale fans believed Purser's initial tweets misunderstood. On Tuesday, in a since-deleted message, the star tweeted to Cole Sprouse about "angry Beronica stans." The tweet upset a lot of fans who hoped the show would actually pair Veronica and Betty in an effort to better represent the queer community.

For Riverdale fans, it's clear that the show has no intention of putting Betty and Veronica together as a couple, so to some, their empty sexual tension fits this definition. (Bustle has reached out to The CW for comment, but has not yet received a response.)

It's worth noting that when it comes to representation, Riverdale has let fans down before. Sprouse's character, Jughead, is asexual in the Archie comics, but the show has not yet shown that aspect of his character. Many fans and critics feel this is potentially a missed opportunity to portray asexuality explicitly and openly on television, a move that would have been meaningful to many asexual teens.

"The way we're treating Riverdale, especially Season 1, is it's an origin story," showrunner Roberto Aguirre-Sacasa told MTV News when speaking of Jughead's sexuality. "So I think all of the kids are discovering themselves, and a big part of that is discovering their sexuality, their sexual selves. Rather than have everything fully formed — for instance, we're not going to start with Archie's band or Jughead's asexuality or any of the things that have become canon — those are all stops on the way to the journey until the show catches up to 75 years of Archie history."

Fortunately, fans took the time to educate Purser on queer-baiting and the star heard them out. Hours after her initial tweets about Betty and Veronica, she shared her own story of coming out as bisexual and made it clear that she is still learning about queer issues:

Luckily, Purser was largely willing to engage with disappointed fans online, and acknowledged how queer-baiting is hurtful. The actor also shared her own personal perspective, as a way to contextualize her thoughts and comments. Hopefully, the successful conversation will inspire similar debate on this issue, and perhaps will give voice to those in the LGBTQ community who are fighting for greater representation.

Perhaps in the future, showrunners and producers will take note of how eager fans are to see queer stories on television, and will take this feedback into account. Until shows start presenting characters diverse in sexuality, it's only right that fans are critical of current media. At some point, TV writers will realize that half-baked bait is not enough if they wants to keep catching viewers.

More like this
Ozzie’s Coming Out Scene With Kitty On 'That ’90s Show' Has Twitter Sobbing
By Brad Witter
24 History-Making Black Women You Probably Didn't Learn About In School
By Ayana Lage and JR Thorpe
25 Inspiring Quotes From Black Women To Celebrate Black History Month
By Kyli Rodriguez-Cayro and JR Thorpe
"Lavender Haze" Star Laith Ashley Breaks Down Filming With Taylor Swift
By Jake Viswanath
Get Even More From Bustle — Sign Up For The Newsletter
From hair trends to relationship advice, our daily newsletter has everything you need to sound like a person who’s on TikTok, even if you aren’t.