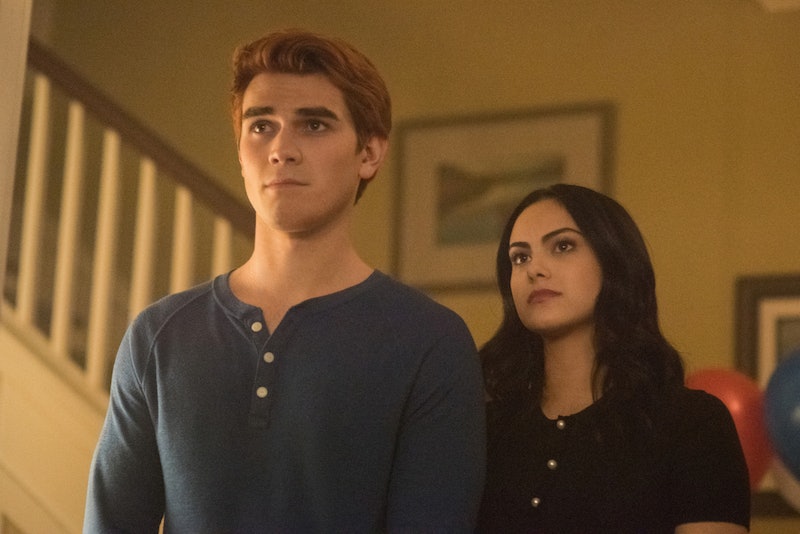 After all the twists and turns of Riverdale Season 2, the season finale ended with a cliffhanger that doesn't look good for wholesome hero Archie Andrews. In a recent interview with TVLine at the CW Upfront presentation, some new details — or, at least, speculation — have been revealed about what happens next. The Riverdale Season 3 hints from the cast speculate as to what Archie's life behind bars would look like.

At the end of Season 2, Archie was framed and arrested for the murder of Cassidy Bullock. He was taken off in handcuffs in front of the whole school. Everything was going so well for him! Archie had won the student body election, successfully threatened Hiram Lodge with a blade, and and whaddya know — that backfired.

"I want him to get a whole lotta tats," said actor KJ Apa about his character. "I want him to join a gang. I want it all." Archie is dramatic enough as a football player/singer-songwriter/private investigator/private security teen. Surely prison will "change" him in one way or another, even if he only ends up spending the night there. At least he'll have plenty of good material for his music when he finally gets out of the slammer.

Other cast members were asked about who would visit Archie in prison, provided he does end up doing some kind of time. "I'd love to say Fred but I think... I dunno why but I think Jughead," said Apa. "I think if I was a father I'd definitely wanna be there for my son, but I've got a feeling Jughead's gonna wanna help him while he's in there."

That's actually a great sign for fans of Archie and Jughead's friendship. The former bros didn't always see eye to eye in Season 2, to put it lightly.

"Reggie's a ride or die guy," said Charles Melton about his character. "He's always had Archie's back. There's that frenemy thing, like, where they're rivals in the school — but outside of school it's a different story. In the real world he's definitely got Archie's back and he'll definitely visit." Friendship truly wins in the end. Isn't that nice?

Toni Topaz, who never really got close to Archie in Season 2, could actually come in handy. "I'm sure Toni's spent some time in juvi," said Vanessa Morgan. "So I'm sure she'll make an appearance and try to help him out." Whether she's helping him survive or helping him choose which prison tattoo to get, of course, remains to be seen.

Cole Sprouse, on the other hand, has a different idea of what Jughead's role will be. "I think Jughead's gonna try to lead the charge to break him out of prison," said Sprouse. "Break him out of prison. I've got a loud ass motorcycle. Throw a stick of dynamite at the wall. You know how in I, Smalls throws grenades at bunny rabbits? That's Jughead Season 3."

Do these clues tell fans anything about Season 3? Riverdale storylines can change fast. It's entirely possible that Archie never ends up spending time in prison at all, and these actors are just making up something fun on the spot.

In a Riverdale Season 2 postmortem interview, also with TVLine, showrunner Roberto Aguirre-Sacasa teased the return of Archie's mom as his lawyer. At the time, the writers were still brainstorming and developing the season.

With these new hints in mind, it seems like Toni might be involved in the juvenile detention center plotline, if it happens, and Jughead will certainly not be involved in any courtroom drama. He's way too much of a vigilante for that kind of justice. Anything can happen on Riverdale, and as Aguirre-Sacasa said, these developments are "delicious."