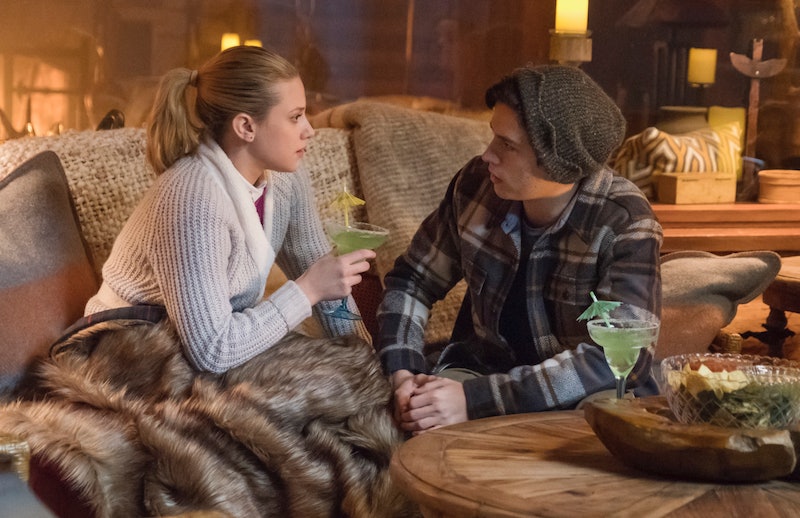 Happiness isn't easy to come by in a town like Riverdale, which has seen more murders than any place should. However, Cole Sprouse and Lili Reinhart recently teased out some interesting spoilers about Riverdale Season 3 at the 2018 San Diego Comic-Con this past weekend that promises sunny days ahead for Betty and Jughead's relationship — throughout the first few episodes of the season, at least.

"Actually, it's looking like it's going to be pretty good for Bughead this season so far," Sprouse revealed to Entertainment Tonight. "[It's] pretty constant, pretty nice." But while that information is sure to make your Bughead-loving heart soar, Reinhart also made a point of chiming in to say that they've only just started filming, so there are no guarantees that the happy couple will stay happy for very long. "We're two episodes in," she said. "So we don't know how things are going to pan out." Sprouse added that the good news is that, "They haven't broken up yet." So, as far as they can tell, Betty and Jughead will continue to be a strong, dynamic force throughout Riverdale's third installment.

In fact, fans can also look forward to them teaming up once again on a professional level as well as they work to solve other mysteries currently plaguing their beloved town. "Betty and Jughead are back to being the investigative sleuths they were in season one," Reinhart shared during the same interview. "They're back to their old selves again, which is kind of fun to see."

However, that's not to say that it'll be smooth-sailing for Betty and Jughead in general during the new season. The Season 3 trailer, which was released at SDCC over the weekend, shows Betty stumbling upon a group of women chanting, including her mother and sister as they hold up Polly's twin babies over a fire in some kind of sacred ritual. Polly joined a mysterious group called The Farm, which has only been briefly touched upon during her visits. Perhaps this organization will play a bigger role in the story moving forward, though from the looks of things it's only going to cause more trouble for the Cooper family.

If that's the case, then it's definitely comforting to know that at least Betty will have her boyfriend to lean on when more problems like this arise, and given that this is Riverdale that we're talking about, problems and new dangers are pretty much guaranteed to rear their ugly heads.

Luckily, one major problem that seems to somehow get worked out will be Archie's time in prison. As most of you know, Season 2 ended on a big cliffhanger with Archie getting arrested for the murder of Cassidy Bullock. And while he's definitely innocent, it's made many fans worry about what this could mean for Riverdale's red-headed hero moving forward. "We start off, Archie is on trial for the murder of Cassidy Bullock," KJ Apa to Entertainment Tonight at SDCC. "He's innocent, but you never know what can happen in Riverdale. That's the great thing about our show. So we'll see what happens."

Though, based on the newly released trailer, that question has already been answered since it shows Archie, Jughead, Betty, and Veronica having a great time together as they celebrate the end of summer. So clearly Archie doesn't stay behind bars for long, but it remains to be seen how he ends up getting released. Fans will just have to wait until the Season 3 premiere in order to get all of those details clarified. It's just nice to see the old gang back together again — with Bughead at the forefront of it all.

More like this
Here's Everyone Who Will Be Competing In 'Survivor' Season 44
By Brad Witter
Linda Ronstadt’s “Long Long Time” Plays A Pivotal Role In The Last Of Us
By Brad Witter
Netflix Shut Down 'Bridgerton' S3 Rumours About A “Very Dark” Storyline
By Bustle
Michael B. Jordan Tackled His "Public Breakup" With Lori Harvey On 'SNL'
By Brad Witter
Get Even More From Bustle — Sign Up For The Newsletter
From hair trends to relationship advice, our daily newsletter has everything you need to sound like a person who’s on TikTok, even if you aren’t.