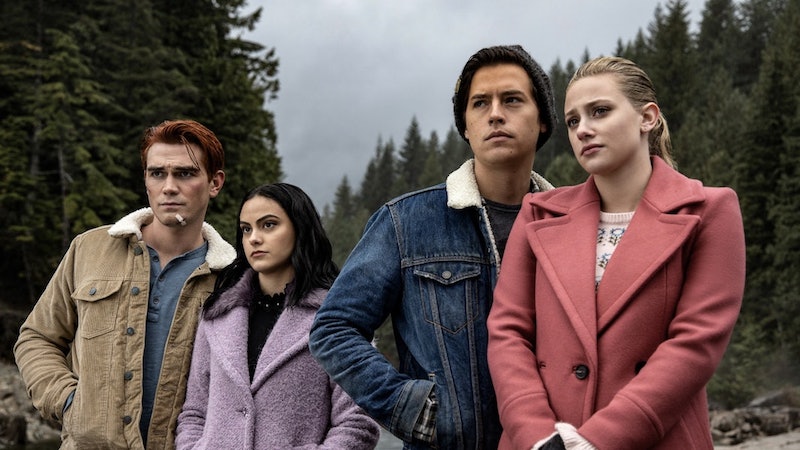 Archie and co. are gearing up for the future: Riverdale Season 5 will likely include a time jump, according to showrunner Roberto Aguirre-Sacasa. In an interview with Entertainment Tonight published on May 13, Aguirre-Sacasa teased a timeline in the upcoming season that would feature the show’s mystery-solving teens four years after Season 4 was supposed to leave off. Given how Archie, Betty, Jughead, and Veronica are off to different colleges, the showrunner said his instinct is to “leapfrog over [those] four years” and pick up in adulthood.

“We’re trying to figure out if we are doing a time jump, how quickly we can do it — and you know, my instinct is as quick as possible after we finish up the stories from Season 4,” Aguirre-Sacasa said. Adding that he wants to drop viewers in “the middle of something crazy," he continued, “One of the things that I’ve been doing during the quarantine is watching episodes of teen shows that have graduated from high school to stories after high school, and you know, they’re pretty split evenly.”

He continued, “Some of them go to college and some of them jump over college and kind of pick up on the other side of it, and, you know, to me high school was better than college.” Aguirre-Sacasa concluded.

Due to the pandemic, Season 4 of the CW series concluded early with Episode 19, “Chapter Seventy-Six: Killing Mr. Honey,” on May 6. The finale left many questions unanswered, like whether or not Archie and his friends would attend prom, let alone graduate high school. Given that these are monumental moments, Aguirre-Sacasa assured viewers that the original final episodes of Riverdale Season 4 would likely exist in some form in the first three episodes of Season 5. “They’re big, emotional episodes, and there’s a lot of stuff with the characters that we’re still playing out,” Aguirre-Sacasa told TVLine on May 6. “After being with the kids at the high school for four years, you kind of don’t want to take graduation away from them.”

Aguirre-Sacasa also revealed that Skeet Ulrich and Marisol Nichols — both initially set to depart the series after Season 4 — will still be seen in Season 5 to ensure a proper send off. “The truth of it is, and this isn’t a spoiler, but neither Hermione nor F.P. are being killed,” he told TVLine. “So my hope is that they are a part of Riverdale in a real way as long as there’s a Riverdale.”