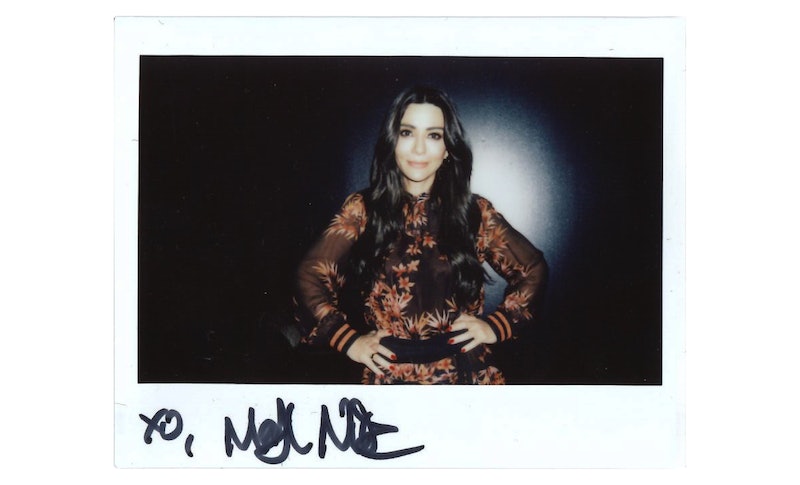 When celebrities hang out with Bustle writers, we want to give them the chance to leave their mark. Literally. So we hand them a pen, a piece of paper, a few questions, and ask them to get creative. The rest is up to them. This time, Marisol Nichols, who plays Hermione Lodge on Riverdale, is leaving her mark in the Bustle Booth.

How many strings is Hermione Lodge pulling on Riverdale? Maybe not enough, if recent events tell us anything. When Hermione hired someone to pose as an FBI Agent and test Archie's loyalty, then dramatically welcomed him to the family at their cliffside meeting in Season 2, she showed Archie she can and will call some of the shots. But even if she's not ready to cross Hiram, at least she finally explained to her daughter that actually going up against Hiram — or leaving him altogether — is more complicated than it sounds.

"You know where like the marriage is over," Nichols laughs, "and it's just painful for everyone? We're kind of watching everything start to dissolve even though it's dangerous for her to leave and to cross Hiram. In this season, she's gonna hit the line. She's gonna hit her line."

For one thing, Hermione is mayor now. Hiram may see that as a direct way to spread corruption in town, but his wife doesn't quite see it that way. "I think Hermione's intention is, 'I might be able to use this to get some power for myself,'" Nichols says. "Hermione likes that position as mayor and wants to do the right thing in and amongst what she's got going with Hiram behind the scenes."

More will certainly come to light when Riverdale explores the dark teenage past of all its parental figures in next Wednesday's episode, "The Midnight Club," a Breakfast Club-like flashback in which Hermione will be played by Veronica actor Camila Mendes. "I remember I wasn't on set when we were filming," says Nichols, "and Cami sent me pictures like, 'Here's me as you,' and I was like, 'That's amazing!'"

"[Mendes] is playing me in high school, pre-getting together with Hiram," Nichols adds. "I love that, actually. It's really interesting to see what Hermione was like before Hiram and what sort of turned her."

She's not the only one trying to distance herself from Hiram Lodge on Riverdale. Archie is still paying for his involvement, and Veronica wants out, too. "This season we're gonna start to see [Veronica] come to terms with who her parents are and what they're doing," says Nichols. Last year, Veronica insisted on being a part of the family business. Her mother never wanted to be involved, and now "Hermione will support her covertly to challenge Hiram," Nichols adds.

While we wait to see what happens next, check out Nichols' answers in our Bustle Booth — especially those emoji spoilers. Gargoyle King, anyone?