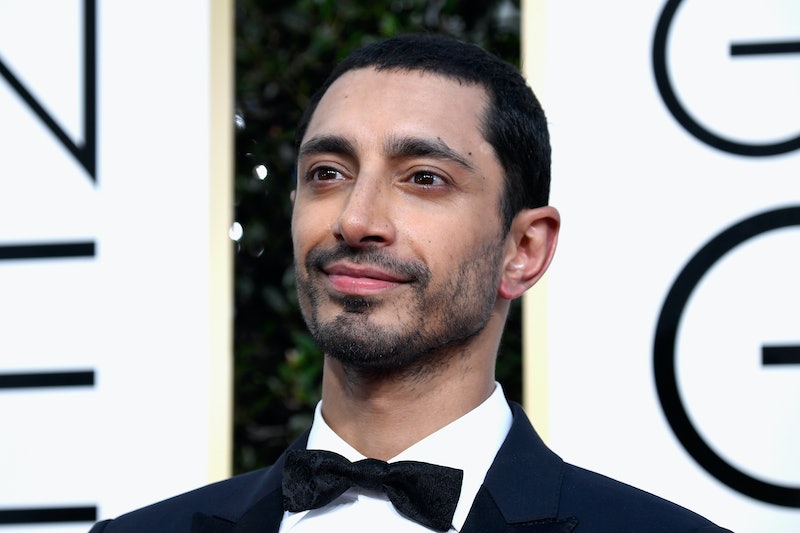 It's already a big year for celebrity activism. On Jan. 21, a huge number of stars joined the Woman's March, including Rihanna, Melissa Benoist, Zendaya, and more. The awards season has been notably political; while celebrities often use their speeches as a platform (Leonardo DiCaprio has been speaking out about climate change from the award stage for years), there does seem to be an uptick in political messaging. (See: Meryl Streep at the Golden Globes, and Julia Louis-Dreyfus and Mahershala Ali at the SAGs.) Another entertainer who is speaking out loudly is actor and activist Riz Ahmed, who believes celebs have a responsibility to be political.

As both a star and political activist, this has been a busy time for Ahmed. He has appeared in a variety of projects over the past year, from big name blockbusters, like Rogue One: A Star Wars Story, to smaller television appearances in shows like The OA. In between roles, Ahmed has also spoken out for refugees and immigrants, starting a Crowdrise campaign for Syrian refugees that hit its $150,000 goal. And last year, the British-Pakistani actor penned a crucial essay for The Guardian about being discriminated against at the airport.

So, how does the actor respond to the criticism that celebs don't have a place in the political arena? Well, he doesn't think it's possible for stars to stay out of the political world. In a recent interview with Entertainment Weekly, he noted how every story with a point of view is inherently political. "I would also say that any perspective is a political perspective," Ahmed told EW. "Any time you focus on one story over another that betrays a set of values that you think is important is political."

Ahmed also told EW how he would respond to the often heard idea that actors and entertainers should just stick to what they do, and he had a pretty perfect answer. He simply said "See, that I don’t understand, because if a reality TV star can be president, then why can’t an actor have an opinion on politics? I don’t get it."

While this is a good-humored answer, he later on expanded on the point. He believes it would be irresponsible for celebs not to use their enormous platform to talk about the issues that are important to them, especially as a way to start conversations.

Ahmed pointed out that many people see the need to break down boundaries between people with different perspectives:

"In this day and age, there are so few forums where global conversations take place between everyone. Everyone’s off in their own little bubbles, everyone’s following people on Twitter they already agree with, or reading news sites they already like, so there are very few areas where lots of different people who might disagree are paying attention".

There is a lot of truth to Ahmed's point. For example, someone with less exposure than he would never be able to raise such a large amount of money for charity and create a positive campaign out of a dark moment. Also, his article on discrimination likely reached a pretty big audience given his celebrity status, sparking a conversation that otherwise would not have been heard. If actors have a moral responsibility to participate in the political process, Ahmed is doing his part.

While this has definitely been Ahmed's year in Hollywood, his most successful role yet might be as an activist. It's easy for him to shut down arguments against actors taking on a political role when his own social projects have made such a difference. I, for one, love to see in Ahmed in both action movies and in the newspaper.