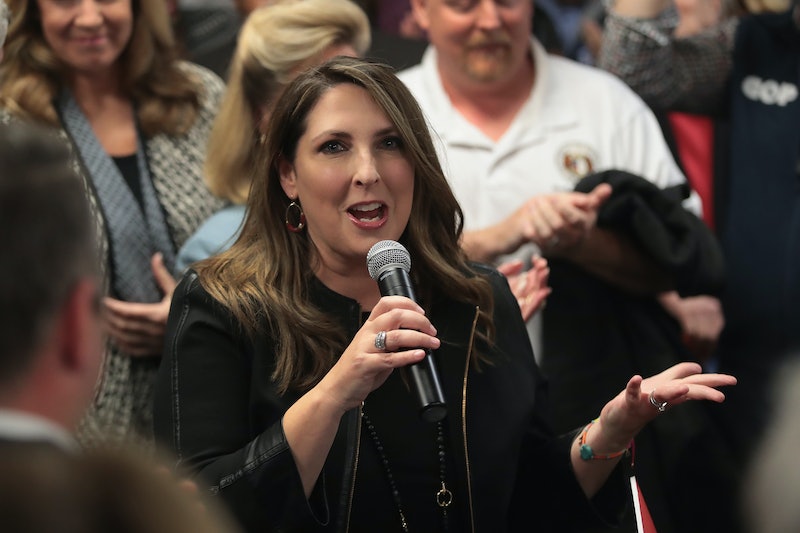 In an interview with CNN, the Republican National Committee (RNC) chairwoman said she personally opposed Alabama's abortion ban. Ronna McDaniel's revelation comes just days after Alabama Gov. Kay Ivey signed legislation prohibiting abortion at any stage of gestation with no exceptions for rape or incest. The controversial bill is the most restrictive abortion law in the country.

"Personally, I would have the exceptions," McDaniel said in an interview on CNN's New Day when asked if she was "comfortable" with provisions within the law that make no exceptions for rape or incest. "That's my personal belief."

McDaniel went on to state, however, that the Republican Party did not require members to subscribe to the exact same viewpoints on abortion, stressing that there were a range of opinions within the party. "We are a party that is a broad tent," she said. "If you agree with us 80 percent of the time, I want you to be a Republican. We don't have a litmus test as to whether you can belong to our party."

Earlier in the week, Collins told CNN she thought Alabama's abortion ban was "very extreme" and "a terrible law." In a separate interview with the Hill, she said she was "very much opposed to the Alabama law."

"I think it's completely inconsistent with Roe v. Wade and will lead to a virtual ban on abortions in Alabama, even for victims of incest and rape," the Hill reported she said.

Sen. Murkowski has also come out against the law, telling reporters she disagreed with Alabama Republicans' decision to remove exceptions for rape and incest from the law, the Hill reported. "I believe that there need to be exceptions," the news outlet reported she said.

But Collins and Murkowski are not the only Congressional Republicans to oppose Alabama's new law. According to The Washington Post, House Minority Leader Kevin McCarthy described Alabama's Human Life Protection Act as having gone "further than I believe."

"I believe in exceptions for rape, incest and life of the mother, and that's what I've voted on," the paper reported McCarthy said.

The office of Senate Majority Leader Mitch McConnell also moved to distance the Kentucky senator from Alabama's restrictive law. "Leader McConnell's record has been clear for decades on this issue," The Washington Post reported McConnell's spokesperson said in a statement. "He opposes abortion except in the instance of rape, incest, or the life of the mother in is danger."

But Alabama's near-total abortion ban may be out of step with more than just Republican party leaders and senators. Previously unreleased polling data suggests Alabama's abortion ban goes further than many Alabama voters would like. According to Alabama Local, a 2018 poll conducted for Planned Parent Southeast by Anzalone Liszt Grove (ALG) Research found that that "banning abortion without exceptions for rape and incest is overwhelmingly a minority position among Alabama voters."