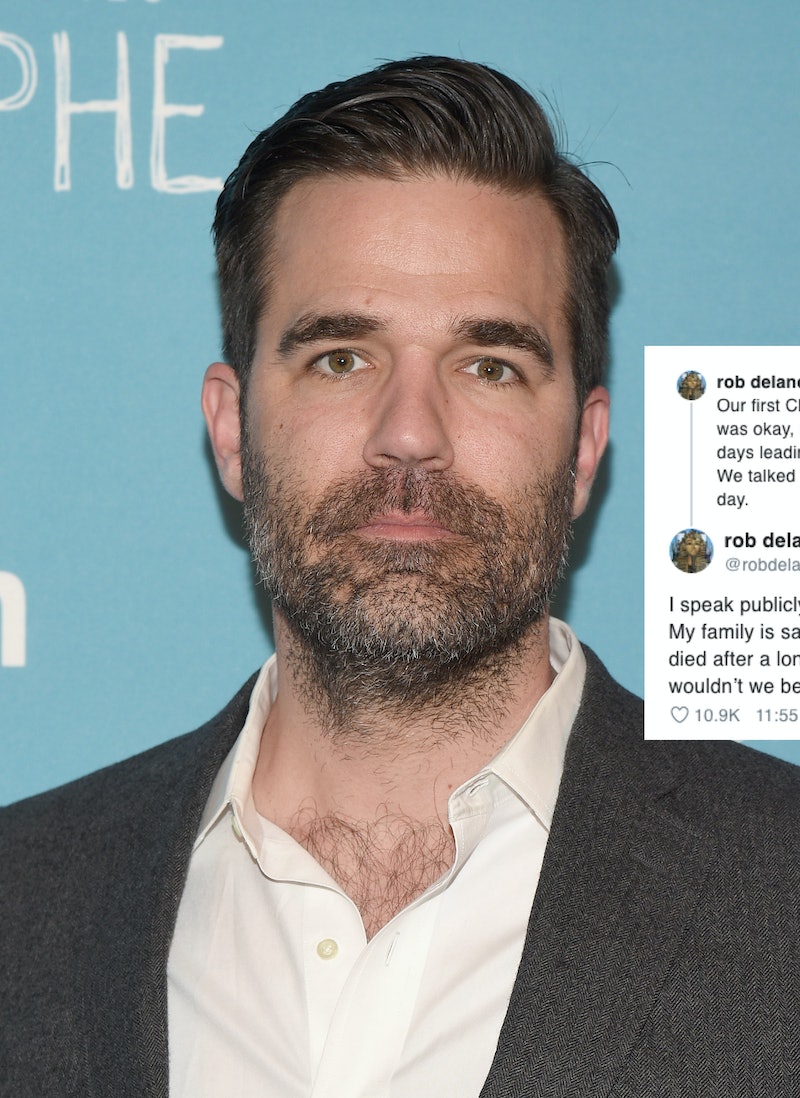 For many people, the holiday season brings thoughts of cookies, family get-togethers, and general merriment. But there are also plenty of people who have a harder time getting through the holiday season. Rob Delaney's tweets about losing his son and celebrating Christmas are a reminder that the holidays can be a time of grieving, and those emotions are just as valid as the Christmas joy that others often talk about.

According to E! News, the comedian's 2-year-old son, Henry, died in January 2018 after being diagnosed with a brain tumor. Delaney wrote in a Facebook post in February that while his son's tumor was removed, "the cancer returned last autumn and he died in January." This year marks Delaney and his wife's first Christmas without their son.

In a Twitter thread on Wednesday, the Catastrophe star explained that to honor Henry, he and his wife "included his memory throughout the day." He also wrote that he was sharing his feelings about Henry not to make himself feel better, but so that others who've experienced loss might not feel alone. Delaney tweeted,

"Tweets like this aren't therapeutic to me, nor are they 'updates.' I just want other bereaved parents & siblings to feel seen/heard/respected/loved. And maybe they might help someone not schooled in grief support a friend better. I don't know."

Delaney's tweets are a good reminder that you never know what someone else is feeling. Even if Christmas brings happy feelings for you and your loved ones, it could be a painful reminder of loss for someone else. His message is hard to read, but it's also important to remember that many people might be feeling grief or depression during the holidays, for any number of reasons.

The comedian ended his Twitter thread by sharing a photo of Henry, whom he says was looking at a tiger when the picture was taken.

Back in September, Delaney shared an essay about his son on Medium. He wrote the essay during Henry's treatments, and it's heartbreaking to read about the pain his son went through during his short time on earth. Still, it sounds like Delaney treasured the time he had with his child. "Despite the physical disabilities he has from the surgery to remove his brain tumor, he's very sharp mentally and gets as excited about a big red double decker bus as any other little boy," the comedian wrote of his son.

Delaney's essay about Henry, along with his recent Christmas tweets, make a good point about being compassionate and sensitive toward loved ones around the holidays. There's often pressure to spread holiday "cheer" or to be "merry" — but sometimes, quiet support can make all the difference, too. If a friend or family member is grieving, checking in on them and letting them know they aren't alone can go a long way.

Delaney's message will likely resonate with others who are dealing with grief this holiday season. It's not a happy topic, but it is an important one.

More like this
Paris Hilton & Carter Reum’s Relationship Timeline Includes A Surprise Baby Boy
By Bustle Editors
Twitter Is In Awe Of Taylor Swift’s “Lavender Haze” Music Video
By Jake Viswanath
Jennifer Coolidge Hunted For Jewels & Lashes In J.Lo’s Hotel Room
By Jake Viswanath
Priyanka Chopra & Nick Jonas’ Matching Tattoos Have A Romantic Meaning
By Radhika Menon
Get Even More From Bustle — Sign Up For The Newsletter
From hair trends to relationship advice, our daily newsletter has everything you need to sound like a person who’s on TikTok, even if you aren’t.