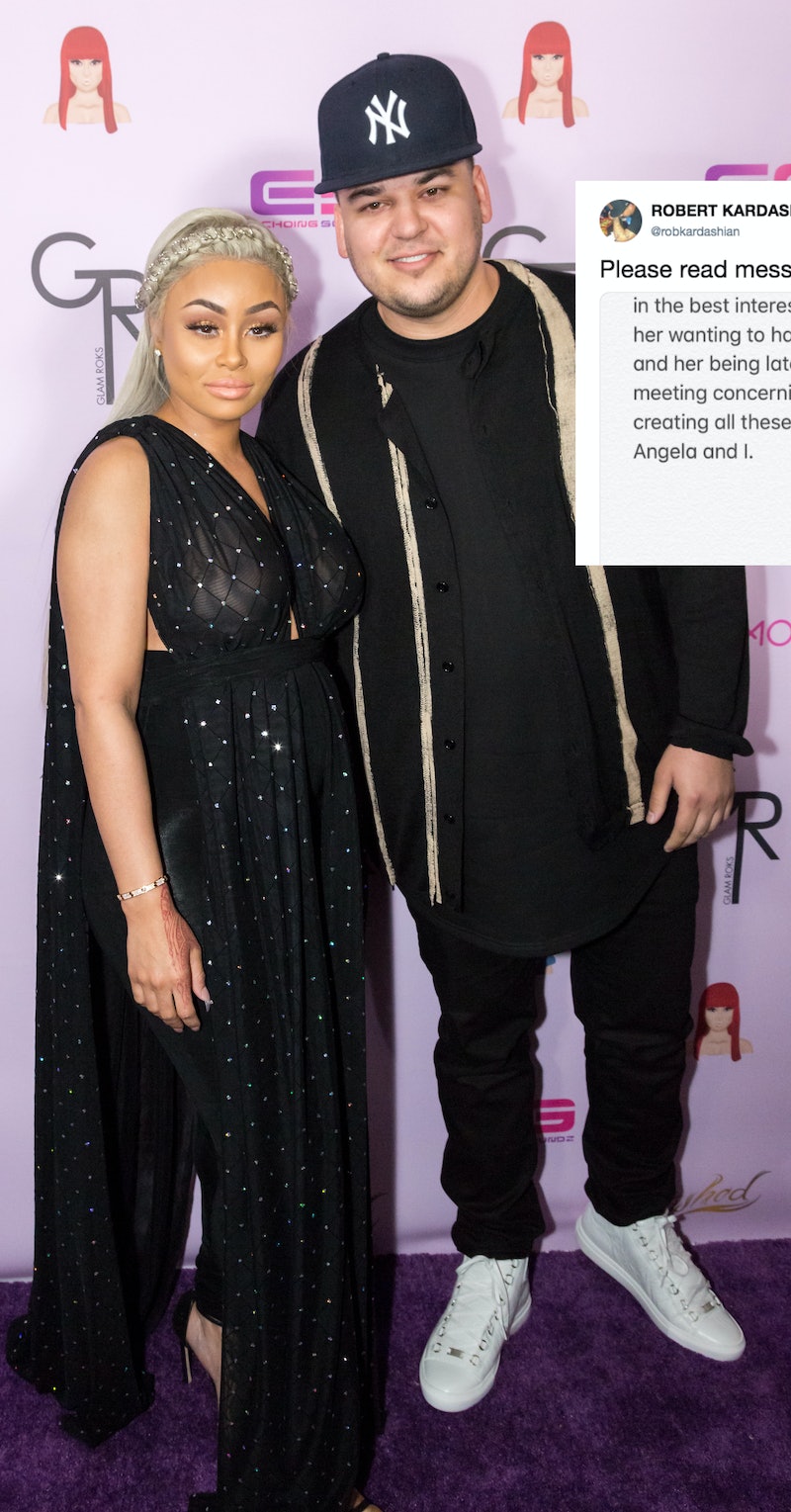 Out of all the Kardashian-Jenner family members, Rob Kardashian is definitely the most low-key. Even so, that doesn't prevent people from gossiping about him. There's been a lot of speculation about his custody agreement with Blac Chyna. Now, Rob Kardashian is speaking out about the custody of his daughter Dream and child support payments. In doing so, he's also putting an end to the rumors about where he stands with his ex.

Even though Kardashian is not the most active on social media, he shared a statement with his Twitter followers on March 27. The father-of-one made it clear that he and Blac Chyna are on the same page when he wrote,

"Angela the mother of my child whom I have a wonderful relationship with decided to drop the child support case because she felt it was in the best interest of our daughter. Reports of her wanting to have drinks was totally false and her being late was in reference to a prior meeting concerning our daughter. Please stop creating all these falsehoods concerning Angela and I."

There's a lot to unpack from Kardashian's statement. First of all, he's addressing the recent news that Blac Chyna dropped her child support case. On March 26, E! News reported that "they agreed to split custody 50/50 but it's true that Rob will have Dream more of the time."

Not only that, but their new agreement reportedly means that he will not have to pay $20K a month in child support. Instead, each of the parents will "pay for whatever Dream needs when either one of them has her for custodial time and any other expenses (school, medical) will be split evenly," according to E! News. That seems like a very logical set-up.

Unfortunately, instead of being commended for this reasonable agreement, Kardashian and Blac Chyna were the subject of rumors online. On March 25, TMZ reported, "Chyna arrived several hours late and dressed to the nines -- in a look that was complete with pointy translucent fake green nails." That same article also claimed, "After the meeting wrapped, Chyna allegedly suggested to Rob the two should go out and grab margaritas ... an offer he immediately declined."

Kardashian refuted his ex's reported lateness and the suggestion to meet for drinks in his aforementioned tweet. Not only are he and his ex in agreement on the best ways to support Dream, but he is also making an effort to support Blac Chyna in response to any unflattering rumors.

Even though the former couple has a tough past (to say the least), the amicable agreement isn't super surprising given their recent history. They've been very united and cordial lately.

On March 17, Chyna wished her ex a happy birthday on her Instagram Story, which should make it clear that there's no animosity between the two parents.

In a Feb. 26 tweet, Kardashian made it clear that he and Blac Chyna are working together in the best interest of their daughter Dream. Chyna quoted his tweet and added that Dream is their primary concern and that her ex is a great father.

Both Kardashian and Blac Chyna have made it clear that there is no longer any custody drama to keep up with. Hopefully, his recent statement will put an end to any negative speculation about their co-parenting dynamic.