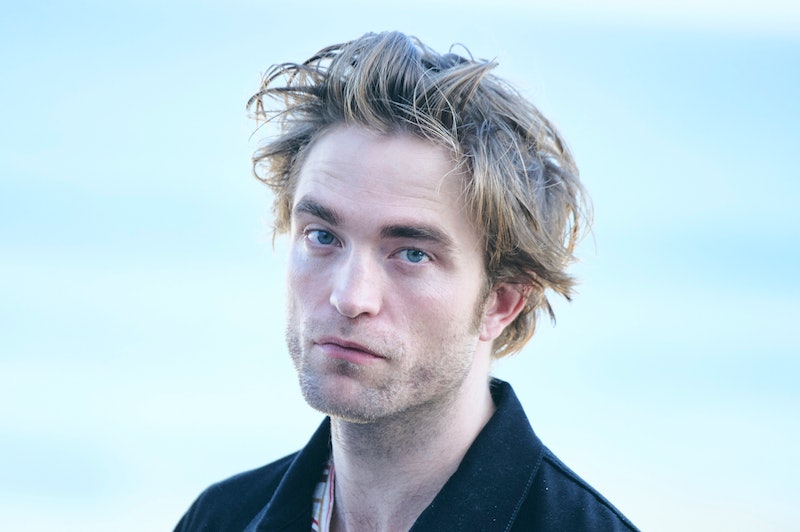 There's no denying that Netflix are slaying it with their original content, especially when they've got the likes of Timothée Chalamet involved in projects like their upcoming film The King. Fans finally got to see a glimpse of Chalamet in a trailer released yesterday (Aug. 27), but in an unlikely turn of events, Robert Pattinson's long hair in The King has become a major talking point on Twitter — and for good reason.

Adapted from plays from Shakespeare's Henriad, The King sees Chalamet play King Henry V as he navigates his inherited title after his father dies. Pattinson will play the role of Louis, who is "one of the sons of King Charles VI of France" as Forbes writes, and is the villain of the piece.

As Refinery29 notes, Pattinson's appearance wasn't surprising as his role was known before the trailer dropped. But it was his hair that took a lot of fans off guard, as instead of his usual short, messy style he instead was seen sporting blonde beach waves down to his shoulders. It doesn't seem to be his actual hair, as Refinery29 writes that fans noted he's "recently been photographed with short hair IRL". Still, that didn't stop the swooning or the memes — even from Netflix themselves.

If you've managed to cool yourself down from all that swooning and aren't so familiar on the source material, Esquire sums it up pretty perfectly: "[T]his specific group of plays is the closest thing you'll see to Game of Thrones-turned-Shakespeare: i.e. a lot of blood, betrayal, and fancy robes." Um, sign me up. And you never know, this adaptation could provide Netflix with the confidence to create more Shakespeare-inspired material for the platform.

Anyway, back to Pattinson. If you thought that was last you'd be seeing of the actor this year, boy you're in for a treat. Following the release of The King this fall, which is set to premiere on Sep. 2 at the Venice Film Festival, fans will get to see Pattinson opposite Willem Dafoe in the black-and-white horror The Lighthouse on Oct. 18, and then in Waiting for the Barbarians on Sep. 6, also at the Venice Film Festival.

All Pattinson's 2019 films will see him in a completely new light, further establishing his chameleon-like talent at adapting to so many different characters. I mean, you've only got to watch Good Time to see how well he adapts for specific roles (if you haven't seen that yet, it's a total must-see).

"When I first started acting, I needed to know the psychological profiles of my characters very, very intimately," he told IndieWire in May. "And then I realised as I try and do something where I feel like I've got any kind of understanding of it, then it's just a disaster."

"As soon as I have a set plan, it will just go wrong. Trying to almost purely rely on intuition is better. It's easier for me just to guess, basically. I used to have scripts which were covered in notes, and now I have nothing. At all. Pretty much ever."

More like this
The Sean Bean Intimacy Coordinator Controversy, Explained
By Sam Ramsden
Lewis Hamilton Turned Down A Role In 'Top Gun: Maverick' For This Surprising Reason
By Darshita Goyal
Ezra Miller Has Been Arrested Again
By Sophie McEvoy
Madonna’s Reason For Directing Her Own Biopic Is So Madonna
By Maxine Harrison
Get The Very Best Of Bustle/UK