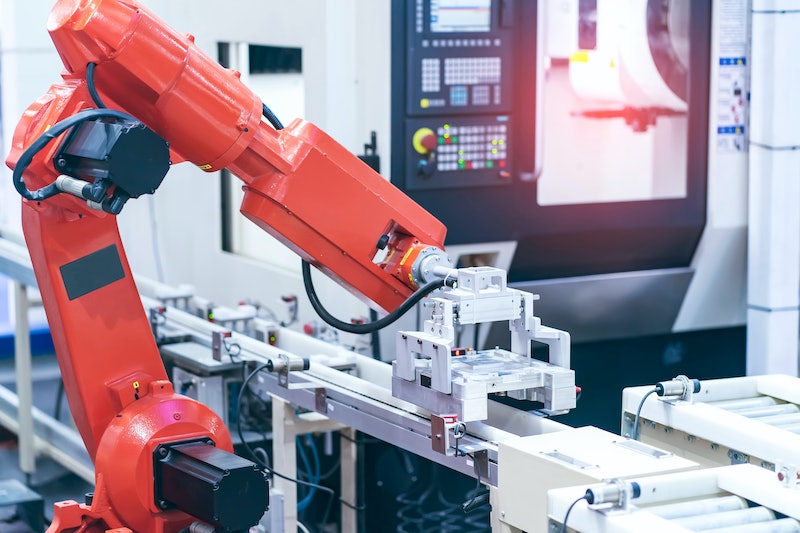 Threats that robots will soon be taking over the world have been happening for decades. In my opinion, this seems highly unlikely in our lifetime, if ever. But there are some worrying statistics surrounding automation and how this process — which uses technology to do things that humans would usually do — could detrimentally impact women. In fact, a new report by the Institute for Public Policy Research (IPPR) has found that robots are more likely to take women's jobs than men's.

Their research has revealed that 9% of women work in occupations with a "high potential for automation" compared to four percent of men. This strengthens previous findings by the Office for National Statistics (ONS), which stated that 70% of the roles most likely to be automated were held by women. (Young people aged between 20 and 24 are also more at risk than other age groups.)

According to the ONS, senior professions within the medical and education sectors had the lowest risk of being disrupted by automation. But everyone from waiters, cleaners, and postal workers to machine operatives, retail assistants, and receptionists had a much higher risk.

Women are slowly moving into higher paid professions, notes consulting company McKinsey. Between 2001 and 2018, female employment in the likes of teaching, legal, medical, and project management roles rose by almost one million. Conversely, the number of women in administrative and secretarial jobs reduced by 450,000. Still, the female link to several of the high-risk occupations is undeniable.

Although this sounds like bad news for gender equality, the IPPR thinks it could be the key to progression. "Automation presents an opportunity. In times of flux, possibilities for structural change are opened up," the organisation writes in the report. It goes on to explain that new jobs may be created by technological innovation and that there is "the possibility of shaping those jobs to ensure they are accessible to everyone."

There is a catch, however. People, particularly those at the top, will have to make a conscious effort to make a fairer world a reality. To avoid endless debate over the topic, the IPPR has come up with several recommendations.

Firstly, it proposes a social partnership organisation that will offer free or subsidised automation consulting, loans, and support to companies that typically involve low-paid work. When productivity is increased in these areas, it is hoped pay will increase too. Again, this is unlikely to happen naturally. But it could be a positive result of raising the minimum wage to the "real living wage" and giving employees more bargaining power.

To make sure any changes remain fair to women, it is also necessary, says the IPPR, to ensure that bigger companies have a diverse gender representation on their boards. It suggests implementing a target of 30 percent female board representation by the end of 2020. If this is not met, the government should respond by making a 50% representation compulsory by 2025.

As well as providing women with better pay and differing job opportunities, automation — if done properly — could also reduce working hours (which would be a godsend for any woman dealing with hours of "unpaid" work in her personal life). The dream of working less days a week may never manifest itself, but employees could be offered a benefit in the form of more annual holiday.

So the next time you panic about a robot stealing your job, try and think on the bright side. With a little effort from employers and some intervention from the government, automation could be the best thing to happen to women in the workplace.

More like this
This Is When Netflix Is Going To Start Charging You For Sharing Passwords
By Darshita Goyal
This Wordle Rival Is Taking Social Media By Storm
By Sam Ramsden
Ashamed Of Your Screen Time Stats? Here's How To Change That
By Alexis Morillo
How To Turn Off TikTok Profile Views So You Can Stalk Other Accounts In Secret
By Alexis Morillo
Get The Very Best Of Bustle/UK
Sign up for Bustle UK's twice-weekly newsletter, featuring the latest must-watch TV, moving personal stories, and expert advice on the hottest viral buys.